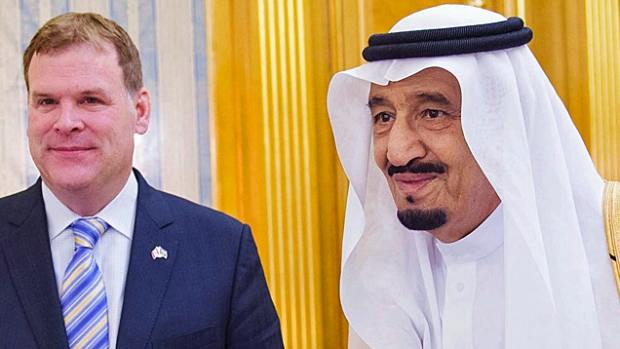 Despite condemning Saudi Arabia’s recent mass executions and raising concerns about human rights abuses, the Canadian government said this week it is moving forward with a controversial $15 billion weapons sale to the Gulf state.

Reportedly Canada’s largest-ever arms export contract, the deal was confirmed amid growing condemnation of ongoing western support for Saudi Arabia, despite mounting evidence of atrocities committed by the state, from neighboring Yemen to its own soil.

The country’s latest execution of 47 people, including of Shia cleric and protest leader Sheikh Nimr al-Nimr, has touched off a dangerous geopolitical rift in which Saudi Arabia and its allies are squaring off against Iran. The state killings have been widely denounced for violating the most basic due process—and employing the death penalty to crush dissent.

“Canada opposes the death penalty and decries the execution of 47 individuals in Saudi Arabia,” Dion said on Sunday. “In the wake of these executions, we reiterate our call to the Government of Saudi Arabia to protect human rights, respect peaceful expressions of dissent and ensure fairness in judicial proceedings.”

However, just a day later, that same office confirmed that it will green-light the mega-arms sale. According to the Canadian paper Globe and Mail, Dion’s spokesperson, Adam Barrett, said on Monday, “A private company is delivering the goods according to a signed contract with the government of Saudi Arabia. The government of Canada has no intention of cancelling that contract.”

The deal involves the sale of an undisclosed amount of armored vehicles by the Ontario-based company General Dynamics Land Systems. The sale was secured in the 2013-2014 fiscal year by the publicly-funded Canadian Commercial Corporation under the hawkish administration of former Prime Minister Stephen Harper.

From the beginning, the sale has been controversial and highly secretive, but despite broad concerns, the administration of newly-minted Prime Minister Justin Trudeau is poised to approve it.

Under federal policies, the Department of Foreign Affairs must ensure that military exports will not be used against civilian populations. According to the research of the Canadian peace NGO Project Ploughshares, “there is video evidence that Canadian-built armored vehicles supplied to Saudi Arabia were used in 2011 to support the repression of peaceful civilian demonstrations by Bahrain security forces.”

Canada is not alone in continuing massive arms sales to the Saudi kingdom amid growing tensions and despite global calls for an arms embargo.

U.S.-based companies are the number one supplier of arms to Saudi Arabia, with the Department of Defense (DoD) announcing in October approval of an $11.25 billion deal to sell combat ships to Saudi Arabia. What’s more, the Pentagon announced in November initial approval of a $1.29 billion arms sale to the Gulf state, including over 10,000 bombs, munitions, and weapons parts.