A Muslim woman wearing a shirt which read "Salam, I come in peace" was forcibly ejected from a Donald Trump rally Friday night as some supporters of the 2016 presidential candidate reportedly hurled Islamophobic epithets at her. Rose Hamid, a

END_OF_DOCUMENT_TOKEN_TO_BE_REPLACED END_OF_DOCUMENT_TOKEN_TO_BE_REPLACED

In immediate aftermath of mass executions, Canada confirms that mega-sale of arms to Gulf state will proceed. 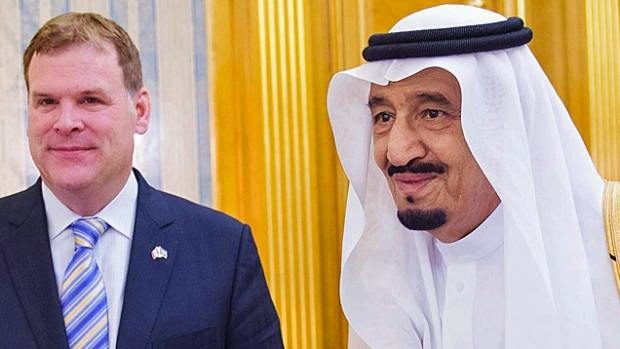 Despite condemning Saudi Arabia's recent mass executions and raising concerns about human rights abuses, the Canadian government said this week it is moving forward with a controversial $15 billion weapons sale to the Gulf state. Reportedly

END_OF_DOCUMENT_TOKEN_TO_BE_REPLACED

Over the weekend, at least 121 people from predominantly Central American countries were rounded up by U.S. authorities. The New Year was just hours old when the administration of President Barack Obama began rounding up and deporting at least 121 people, some reportedly as young as four years old, presumably back to the drug wars and violence they are fleeing in predominantly Central American countries. The coordinated raids over the weekend focused mostly in

END_OF_DOCUMENT_TOKEN_TO_BE_REPLACED

2015: The Year Police Killings In America Were Counted

Heightened visibility alone, however, has not effectively ended such slayings or brought justice to victims. The Black Lives Matter movement that swept the country in 2015 has—among other accomplishments—forced global media outlets to afford victims of police killings the most basic acknowledgement: a public record of their names and deaths. Such a grim tally was maintained this year by both

END_OF_DOCUMENT_TOKEN_TO_BE_REPLACED

State Department Claims It Brought Peace to Syria in 2015 State Department spokesperson John Kirby is raising eyebrows after he released a recap of 2015 "success stories" in which he credits the United States for bringing "peace" and "security" to Syria and "stepping up" to help the country's people at a difficult time. "The United States and many members of the international community have stepped up

END_OF_DOCUMENT_TOKEN_TO_BE_REPLACED

Decision states mall can ban three specifically-named individuals from a Wednesday demonstration but can not force the group to post social media messages canceling the mobilization. A Hennepin County judge on Tuesday afternoon struck a blow against an effort by the Mall of America to block a Black Lives Matter-Minneapolis protest slated to take place at the iconic shopping center on Wednesday. The court ruled that the mall can legally