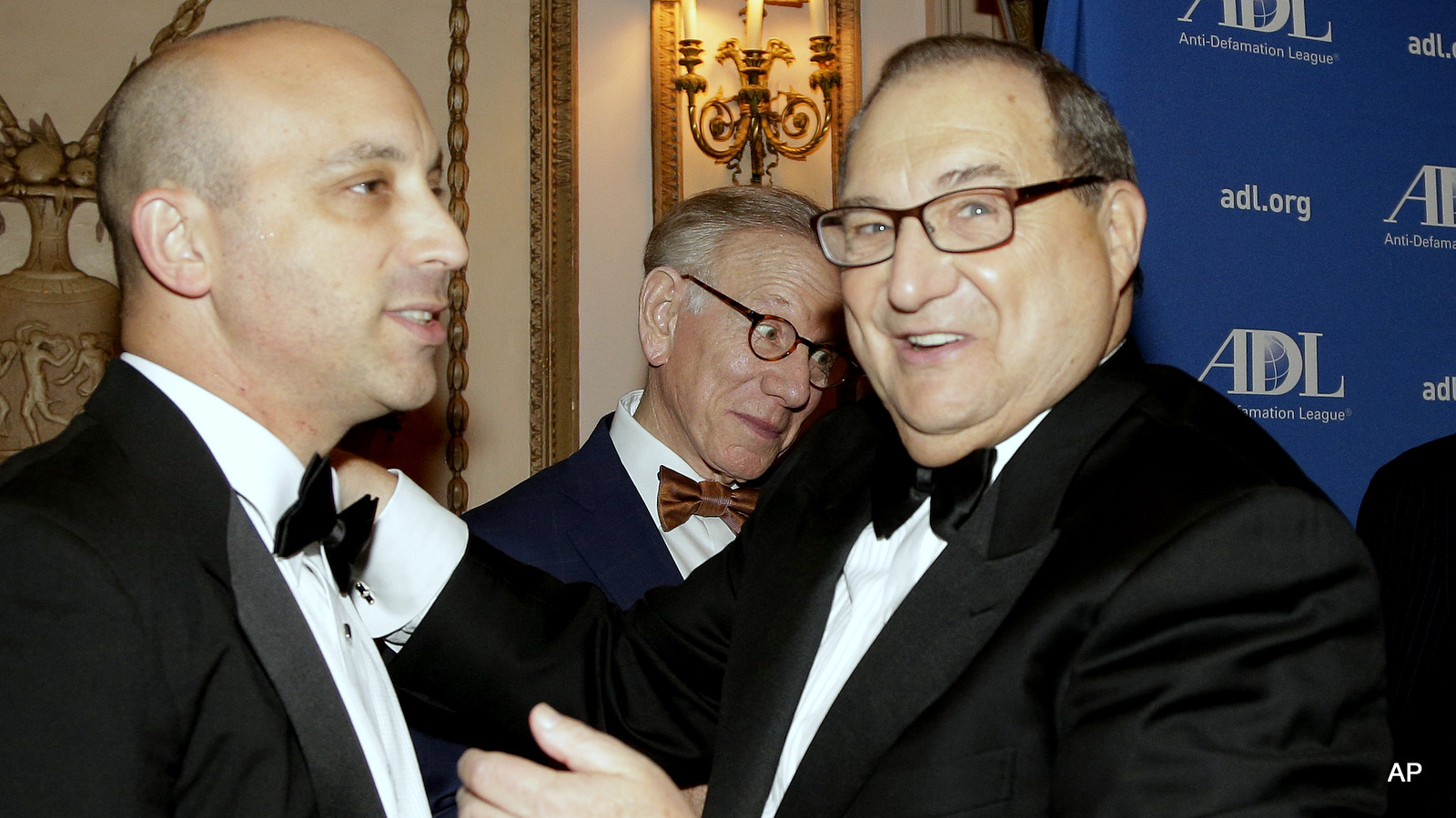 Jonathan Greenblatt, left, incoming national director for the Anti-Defamation League, talks with Abe Foxman, former director of the ADL, during a reception for a special dinner in Foxman’s honor in New York.

On Monday morning NPR’s Tom Gjelten reported the Anti-Defamation League’s recent challenges interfacing with peace and justice groups in the aftermath of Michael Brown’s death in Ferguson and Black Lives Matter movement. According to Gjelten, the Anti-Defamation League arose in 1913 to “put an end forever to unfair and unjust discrimination against…any sect or body of citizens.” ADL stood alongside the NAACP to end discrimination against African Americans in the South, which was the focus of NPR’s story. The ADL’s new President, Jonathan Greenblatt, a former special assistant to President Obama, wants to rekindle the spirit of solidarity encapsulated in a photo he frequently shows of Dr. Martin Luther King, Robert F. Kennedy and the heads of the ADL and NAACP in a Rose Garden snapshot with LBJ just before the famous March on Washington.

The crux of the problem – according to Gjelten and the ADL – is that modern day movements like Black Lives Matter are more partial to advice from Palestinians living under perennial Israeli military occupation for tactics in dealing with heavily militarized police. The solution is to make the ADL “a consistently valued civil rights partner in a time of divided loyalties.” But how can the ADL accomplish that? Has it gotten too comfortable in the “suites” to ever march again in the “streets?” Does ADL have anything of value to offer in exchange for the “loyalties” of grassroots movements? Is that even the right question?

A review of the ADL’s unvarnished – yet little known – history may provide answers for how the organization could – but likely will not – become more relevant:

In its initial announcement the League stated clearly that the “defamation of Jews on the stage, in moving pictures” created “an untrue and injurious impression of an entire people and to expose the Jew to undeserved contempt and ridicule” as leading sources of prejudice in most immediate need of redress. The League claimed it would act openly to publicly pressure producers and managers of theaters prior to the staging of defamatory productions, thus correcting “evils before any harm is done.” Defamatory newspaper and magazine articles would also be met with “protest to the editor” and “subsequent articles upon the same subject matter, thereby reaching the same reading public and correcting errors.” An economic boycott would be then made “by appealing to the patrons and advertisers for co-operation” to confront the most egregious cases of willful abuse.

Like many within the universe of pro peace and justice organizations today, ADL was once a tiny operation. Its Chicago headquarters was originally housed within the law office of Sigmund Livingston and started out with “a $200 budget and two desks.” In its early days the ADL was open to all who would sign a membership card. By 1930, the ADL successfully persuaded Roget’s Thesaurus to remove a hateful entry equating the word “Jew” as synonymous with “cunning rich, usurer, extortioner, heretic.” But ADL has launched no similarly effective campaign on behalf of today’s most disenfranchised groups. It cannot. Once again funding is a major constraint. Many of the Israel lobby’s biggest donors actively and richly fund Islamophobia.

Today it is Muslims, Arabs and Persians in general (Palestinians, Iranians and the territories where they live in particular) that are under constant assault – not byRoget’s – but vastly more powerful forces such as the military-industrial-congressional complex, Hollywood, the mainstream media and not coincidentally, many Israel affinity organizations. Like the Japanese-American internees once secretly targeted by the ADL, such groups are judged to be weak, disorganized, disenfranchised and unable to tell their own stories – or even possess stories worth hearing. They serve as convenient scapegoats for enfranchised elites and the national security state. Unlike evangelical Christians or Hispanic groups, they do not factor into the Israel lobby’s larger political calculations – and likely never will – absent a radical shift in Israel’s – and therefore the ADL’s – strategy.

But their stories and tactics are relevant. Not because of “competing loyalties,” but rather the sheer relevance of Palestinian resistance against all odds as an example for oppressed people tired of poverty, war and oppression around the world. Many in the peace and justice movement are both curious and have internet access. Armed with accurate information, they are unlikely to become sympathetic to the ADL’s highly selective and self-serving historical narratives of the good ol’ days.

Grant F. Smith is the author of the new book Big Israel: How Israel’s Lobby Moves America. He is director of the Institute for Research: Middle Eastern Policy in Washington (IRmep), D.C. Read other articles by Smith, or visit the Israel Lobby Archive website.

This article first appeared on AntiWar.com