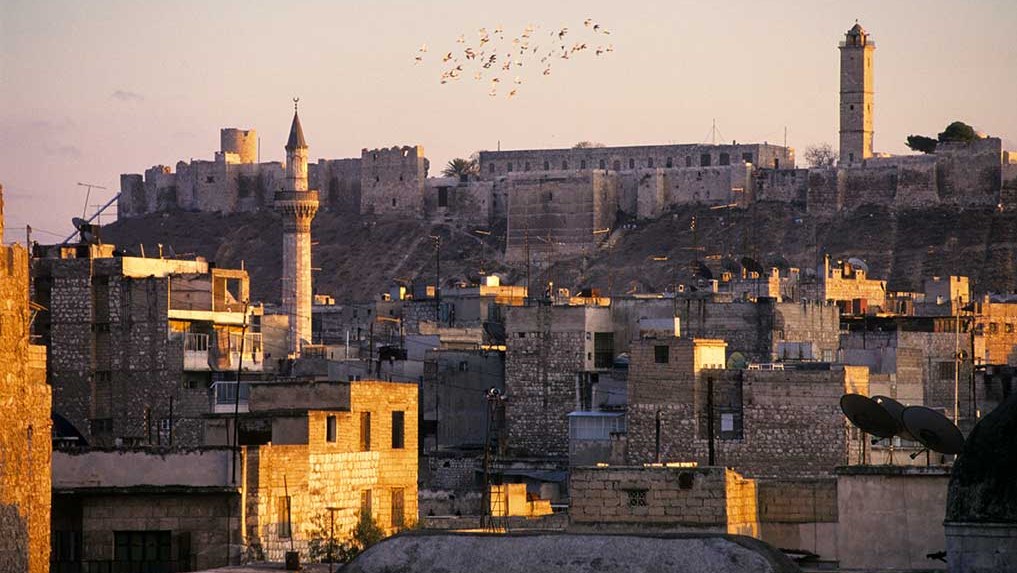 Aleppo as I knew it, before the devastation.

The covered bazaar in Aleppo, said to be the largest indoor Souk in the world, during happier times. (photo Norbert Schiller)

This is part of a series of “diaries” by veteran photojournalist Norbert Schiller, reflecting on his world travels in decades past:

I was driving from the Beqaa Valley over the mountains toward Beirut, during a recent visit to Lebanon, when I received a text message on my mobile phone. I glanced down and noticed that it was a message welcoming me to Syria. It’s not uncommon to pick up one of Syria’s cellular network in Lebanon and normally I would have just ignored it if it weren’t for what was written:

“Ministry of Tourism welcomes you in Syria. Please call 137 for tourism information or complaints.”

If the crises in Syria were not so tragic, I might have seen a little humor in the message. Unfortunately, the situation is anything but amusing.

Looking back, I feel very fortunate to have visited Syria when I did. I can’t tell you how many friends I have living in the Middle East who regret never having traveled to Syria when they had the opportunity. The night before I left Beirut, one of my wife’s childhood friends stopped by to chat; during our conversation, Syria came up, which is not uncommon considering that the fighting occasionally spills over the border.

“Jean-Luc and I were always planning to take the kids on a road trip through Syria,” she said, “and now I’m kicking myself for not having done so.”

“We were stupid,” she continued. “Instead of taking our holidays close to home, we always made it a point to travel somewhere far.”

I was lucky because for two decades I frequently traveled to Syria for work.  Occasionally my wife would join me, but like her friend, I regret never having taking our two children with us.

One of my favorite places to visit was Aleppo, the commercial capital of Syria. Like Damascus, Aleppo is considered to be one of the oldest continually inhabited cities in the world, dating back to the 6th millennium B.C. Aleppo’s success as a trading center goes back centuries, when it acted as a vital link for caravans traveling the Silk Road. Aleppo is one of six UNESCO World Heritage sites within Syria that is under threat from the country’s two-and-a-half year civil war.

Up until a year ago, the historic old city of Aleppo was largely immune from the fighting — but then tragedy struck.

On Sept. 28, 2012, fighting broke out between government forces and the rebels in Aleppo, and it quickly spread to the old city and the bazaar, which is believed to be the largest covered bazaar in the world. Within hours, the covered souk was up in flames and over the course of the next few days, over a hundred shops were torched and portions of the medieval vaulted ceiling collapsed.

The view of Aleppo’s old city and Citadel from the rooftop garden of the Dar Zamaria Hotel. (photo Norbert Schiller)

I can’t recall how many times I visited Aleppo, but I know that every time I went, whether for work or tourism, I spent part of my time exploring the covered bazaar, the surrounding old city and the Citadel. I remember once in the early 1990s, shortly after the Ataturk Dam was completed in Turkey, I went to Syria to illustrate a story on how the dam was affecting life on the Euphrates River downstream. After touring the river basin, I headed back to Aleppo with my driver. It was already quite late; because I had a flight out early the next morning, I asked my driver to stop at the covered bazaar before heading to the hotel. He said that the souk would most likely be closed, but when I insisted, he said he would try and speed up a bit.

We got there just as the last of the shops were closing, but that did not deter me from going out and exploring the souk by night. Actually, it was quite fascinating to walk through the empty domed passageways after hours. The only people out and about were the street cleaners removing the day’s garbage.

Toward the end of my walkabout I happened to pass the only shop that was still open. The vendor was taking down a lovely old Turkmen carpet hanging above his storefront. Having been an avid collector of tribal carpets for sometime, I stopped and asked, how much for the Turkmen. After a tough negotiating session that lasted well into the night, we finally agreed on a price. I was quite excited about my purchase, especially considering I had no intention of buying anything when I entered the bazaar earlier that evening.

When I arrived in Beirut, I proudly exhibited my latest acquisition to my mother-in-law, who was a connoisseuse in her own right due to all the family heirlooms that she had inherited over the years. After inspecting it closely, she asked how much I had paid. When I disclosed the price, she condescendingly declared, “It’s full of holes, you got ripped off.”

To this day, one of my fondest memories of Aleppo was when I visited with my wife for a short holiday.

We stayed at my favorite hotel, Dar Zamaria, located in al Jdeideh, the Armenian Christian quarter, on a hill overlooking the old city. Dar Zamaria was a traditional 19th-century Ottoman-style house, originally home to the Zamaria family. Like many of the old homes in al Jdeideh, Dar Zamaria was converted into a hotel in the late 1990s when Aleppo went through a boutique tourism revival of sorts.

The cuisine at Dar Zamaria was superb, featuring a variety Middle Eastern dishes including kibbeh Halab, an Aleppine specialty of cracked wheat filled with minced meat, diced onions and plenty of spices. All the rooms at Dar Zamaria opened up onto a central covered courtyard, used as a dining area. No two rooms were alike, so it was always a surprise to enter a room for the first time. Above the hotel was a patio garden, from which there was a spectacular view of the Citadel towering above the old city.

Every day my wife and I took long walks down the hill, through the Jdeideh quarter to the covered bazaar. What really set Aleppo’s bazaar apart from all the other souks in the Middle East was that it remained the most authentic during a time when many bazaars in the region looked more like dumping grounds for cheap Chinese goods. Sure, you could find the odd shop that sold tacky plastic trinkets, but for the most part, the old souk, with its 10 kilometers of covered passageways, was a “living” bazaar that catered to the people of Aleppo. The bazaar was divided into different areas that specialized in spices, perfume, fabric, gold, dried fruits and nuts, brass and Aleppo’s famous soap, made from olive oil.

The covered bazaar in Aleppo, said to be the largest indoor souk in the world, before the outbreak of the civil war. (photo Norbert Schiller)

Booking a room in a burnt-out building

Over the centuries, invading armies — including the Mongols — came and left their mark on Aleppo, but no invasion left such a trail of destruction as now. With the Syrian civil war well into its third year, the city has been completely decimated. The old covered bazaar is in ruin; the 11th-century minaret inside the Umayyad Mosque has been reduced to rubble. The Citadel, which is considered to be the oldest castle in the world, dating back to the 3rd millennium B.C., is now a stronghold for Bashar al-Assad’s forces and is caught in deadly crossfire with the rebels. Nobody knows the fate of the giant wooden door that once graced the entrance of the Citadel. Some reports say it was stolen; others say it was destroyed by an artillery round. Either way, it’s just another in a long list of historic treasures that have suffered irreversible damage.

From the images I have seen on the Internet and on television, the old city is beyond recognition, like the charred corpse of someone you once knew. The Christian quarter of al Jdeideh, my old haunt, is now the frontlines in the fighting, and from what I’ve heard, there is nothing left of Dar Zamaria but a burnt-out shell.

Even though I was surprised to receive the welcoming text message to Syria recently, it was just that: a simple message that nobody bothered to change. What really caught me off-guard was finding Dar Zamaria’s hotel website while researching this story.

Dar Zamaria is said to be in total ruin, but the hotel’s website is as intact as it was the last time I used it to book a room. Nothing has changed, not even the photo gallery, which shows views of the different rooms, the indoor courtyard, the reception area, the surrounding neighborhood and the terrace garden with its magnificent view.

The most disturbing feature is that you can still go on to the website and book a room.

In my third installment, I will continue my journey through Syria, revisiting some of the lesser-known places in the country.

Guests enjoying a meal inside the covered courtyard of the Dar Zamaria Hotel. (photo Norbert Schiller)