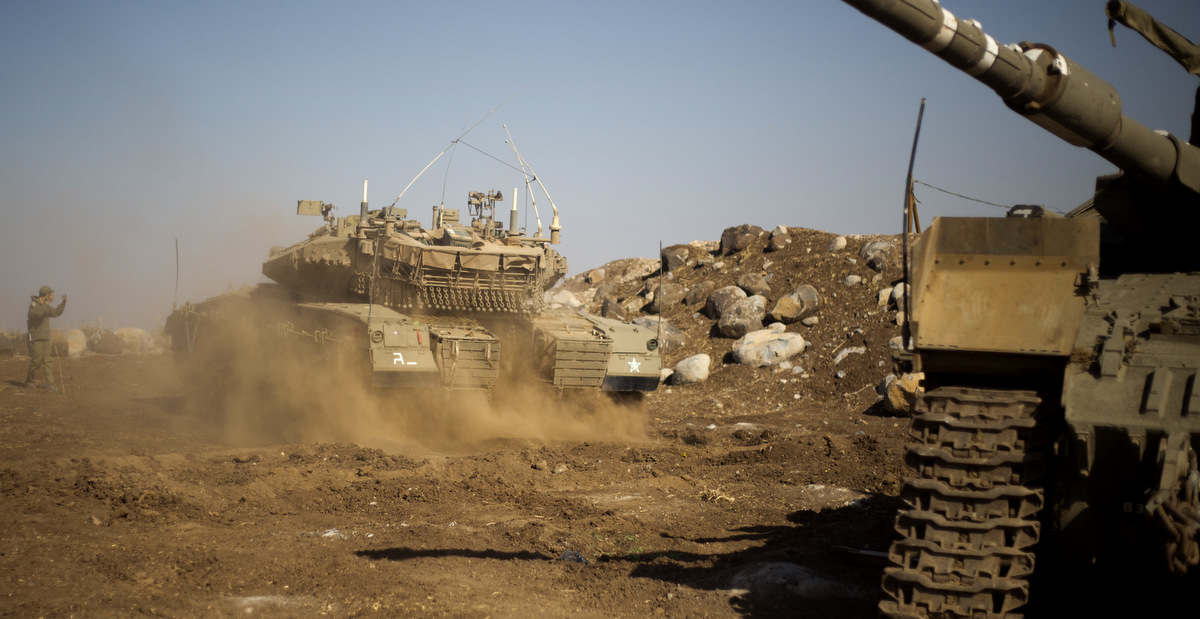 As Syria Nears Victory Against Rebels, Israel Begins To Panic

There’s a rumor going around that the Syrian civil war is finally winding down and that the Baathist government is nearing its goal of driving out thousands of ISIS-Al Qaeda head-choppers financed and supplied – directly or indirectly – by the U.S., Turkey, Saudi Arabia, and the other Persian Gulf oil monarchies

It would be good news if true. But most likely it’s not. While one stage in the Syrian conflict is coming to an end, another is beginning, and this time the results could be even worse.

The reason is Israel, until now the odd man in the latest Mideast wars. Despite intervening sporadically on the rebel side in Syria, the Jewish state generally held itself aloof from the conflict in the belief that events were breaking its way regardless of whether it stepped in or not. After all, why go to war when your enemies are doing a fine job of tearing each other apart on their own?

With President Bashar al-Assad expected to step down eventually, Israel figured that it only had to wait and watch as a hostile regime collapsed under its own weight as it thrashed about unable to restore order to Syria. Never in the Arab-Israeli hundred years’ war had Israel seemed stronger and the Arabs weaker and in greater disarray.

But then the unthinkable happened. Assad not only survived but prevailed. Backed by Russia, Iran and the Lebanese Shi‘ite militia Hezbollah, he has bottled up Al Qaeda in East Ghouta and Idlib province in the extreme northwest and is racing to lift ISIS’s siege on Deir-Ezzor along the Euphrates. If successful, the effect will be to clear a path straight through to the Iraqi border some 30 miles to the east.

U.S. military enclaves may remain in the northeast and in the southern border town of Al-Tanf. But it’s hard to see how they’ll have much of an impact as the Damascus regime tightens its grip on the country as a whole. A Hezbollah fighter stands on a hill next to the group’s yellow flag in the fields of the Syrian town of Assal al-Ward in the mountainous region of Qalamoun, Syria. (AP/Bassem Mroue)

Rather than making a wider war less likely, the upshot is to make it even more. Having bet on the wrong horse, Prime Minister Benjamin Netanyahu now finds himself facing a nightmare scenario in which Iran takes advantage of Assad’s winning streak to extend its reach from Iraq and Syria into Lebanon beyond. It’s not just a question of political influence, but of the emergence of a powerful Iranian-led military bloc.

Eleven years after fighting a vicious 34-day war in southern Lebanon, Israel thus finds itself facing not only Hezbollah but the Syrian Arab Army, Iran’s Islamic Revolutionary Guards, and Iraqi Shi‘ite militias – all backed by Russian military might – in a front extending across its entire northern border. All are battle-hardened after years of combat, better armed, better led, and more self-confident to boot. Israel finds itself confronting a new threat that is many times more powerful than Hezbollah (or Syria) alone.

Related | Fear And Trepidation In Tel Aviv: Is Israel Losing In Syria?

Israeli consternation is not to be underestimated. One news outlet says the official attitude is one of “grave concern” while an anonymous government minister heaped blame on the U.S. for sacrificing Israeli interests:

The United States threw Israel under the bus for the second time in a row. The first time was the nuclear agreement with Iran, the second time is now that the United States ignores the fact that Iran is obtaining territorial continuity to the Mediterranean Sea and Israel’s northern border. What is most worrisome is that this time, it was President Donald Trump who threw us to the four winds – though viewed as Israel’s great friend. It turns out that when it comes to actions and not just talk, he didn’t deliver the goods.”

Netanyahu is meanwhile off to the Black Sea resort of Sochi to confer with Russian President Vladimir Putin while, in Washington, Israeli military and intelligence officials are meeting with top Trump officials such as National Security Adviser H.R. McMaster and special Mideast envoy Jason Greenblatt.

Israel has also engaged in saber-rattling with regard to a missile factory that it says Iran is building in the Syrian port city of Baniyas. Gadi Eisenkot, the Israeli military’s chief of staff, said that stopping efforts by Iran, Syria, and Hezbollah to equip themselves with accurate missiles capable of striking deep inside the Jewish state “is our top priority.”

Adds Avigdor Lieberman, Israel’s hard-right defense minister: “We know what needs to be done….  We won’t ignore the establishment of Iranian weapons factories in Lebanon.”

The Chorus of the NeoCons

Words like that should not be taken lightly. Meanwhile, influential neoconservatives are joining the me-too chorus. At the Atlantic Council – the hawkish Washington think tank partly funded by the United Arab Emirates and pro-Saudi interests that functioned as an arm of Hillary Clinton’s 2016 presidential campaign – former Obama administration official Frederic C. Hof recently argued that the U.S. wouldn’t be in such a pickle if it had invaded Syria years ago:

A Syrian opposition recognized by Washington in December 2012 as the ‘legitimate representative of the Syrian people’ should have been tasked with preparing for post-ISIS governance, and assisted to that end by an American-organized, multi-national effort. An all-Syrian stabilization force should have been built in a protected eastern Syria to pacify the area, facilitate humanitarian aid, and spur reconstruction.”

But now the U.S. is seemingly “indifferent” to what comes next once Islamic State is gone. As a consequence, Hof said, the Trump administration is effectively “install[ing] Iran as Syria’s suzerain, with the Assad entourage sifting through the country’s ruins for spoils and setting the stage for successive waves and varieties of extremism arising in response.” The only solution, according to Hof, is a radical strategic change “to prevent Iran and Assad doing their worst for the security of the United States, its allies, and its partners.”

Of course, a few complications could get in the way. One involves Russian President Vladimir Putin who, despite his close alliance with Assad, enjoys a solid working relationship with Israel and is none too eager to see war break out between the two countries. Another is the Syrian government in Damascus, which, under the leadership of the careful and cautious Assad, is none too eager to rush into a conflict that could conceivably prove even more ruinous than the one it is trying to finish up. But even sober politicians like Putin and Assad may be unable to cope with the forces raging across the Middle East. The sectarian war that the Saudis unleashed more than a decade ago with U.S, help shows no signs of letting up. The kingdom is mired in an anti-Shi‘ite crusade in Yemen that it is desperate to escape, but doesn’t know how. It has suppressed a Shi‘ite uprising in Awamiyah, a city of 25,000 people in its own oil-rich Eastern Province, killing dozens according to Iranian sources and flattening an entire neighborhood, but dissent continues to bubble up ominously.

Saudi Arabia also has imposed an economic blockade on Qatar, and it is backing a repressive regime in Bahrain that has imposed a reign of terror on the country’s 70-percent Shi‘ite majority. Riyadh continues to engage in a dangerous war of words with Iran, which the royal family believes is engaged in an Elders of Zion-like Shi‘ite conspiracy to dismember the kingdom and wrest away control of Mecca and Medina.

The more paranoid Saudi leaders become, the more threatening Saudi Arabia grows – and the more resolved Iran becomes to make the most of its victory in Syria by fulfilling the ancient Persian goal of opening a corridor to the Mediterranean Sea. Aggression on one side leads to counter-aggression on the other, a process of mutual escalation that seems impossible to reverse.

Finally, there is the question of political stability – or, rather, an increasing lack thereof. In Iran, newly re-elected President Hassan Rouhani is locked in a growing confrontation with hardline Shi‘ite Islamists with little appetite for compromise.

In Saudi Arabia, power is in the hands of Crown Prince Muhammad bin Salman, a rambunctious 31-year-old who launched the disastrous war in Yemen in March 2015 – and then disappeared on a vacation in the Maldives as U.S. officials tried desperately to reach him by phone – and who more recently unveiled an ambitious economic reform program that so far has done nothing to stem the kingdom’s alarming decline. Despite vows to diversify the economy, non-oil revenue actually shrank by 17 percent this spring while foreign reserves have fallen by nearly a third since 2014. But that didn’t stop MbS, as he’s known, from committing himself to $110 billion in U.S. arms purchases in May or his father, King Salman, from spending a reported $100 million on a summer vacation in Morocco.

Saudi Arabia is thus becoming the sick man of the Middle East, one whose collapse could trigger a “geopolitical tsunami” sweeping across much of the region.

Donald Trump holds a sword and sways with traditional dancers during a welcome ceremony at Murabba Palace, in Riyadh, Saudi Arabia, May 20, 2017. (AP/Evan Vucci)

Then there is the United States, where politics are even more unsettled. As President Trump careens from one disaster to another, foreign policy has grown both unpredictable and bellicose. One day, America’s second popular-vote-losing president in 16 years is calling for regime change in Tehran, the next he’s threatening Pyongyang with “fire and fury,” and then he’s blustering about some unspecified “military option” with regard to Venezuela.

The fact that Trump has so far demonstrated little follow-through is hardly reassuring. Sooner or later, rash rhetoric can only lead to rash actions, if not on America’s part than someone else’s. The shakier Trump grows, the greater the likelihood that he will engage in some risky adventure in order to strengthen his grip.

A number of forces are thus converging: political instability in Tehran, Riyadh and Washington, a growing thirst for more war on the part of Israel and the U.S. foreign-policy establishment, and a growing defensiveness on the part of a “Shi‘ite crescent” stretching from Yemen to southern Lebanon. The United States, Turkey, Saudi Arabia, and others have already plunged Syria into death and destruction by sponsoring a murderous Sunni Salafist assault on one of the most diverse populations in the Middle East. The big question now is whether, with Israeli help, they are about to impose another.

Given the vicious cycle of violence in the Middle East, one that the U.S. has done its level best to worsen at every step of the way, it’s hard not to believe that even worse may be ahead.

Daniel Lazare is the author of several books including The Frozen Republic: How the Constitution Is Paralyzing Democracy (Harcourt Brace).

Top photo: An Israeli soldier directs a tank near the border with Syria in the Israeli-occupied Golan Heights, Nov. 28, 2016. (AP/Ariel Schalit)