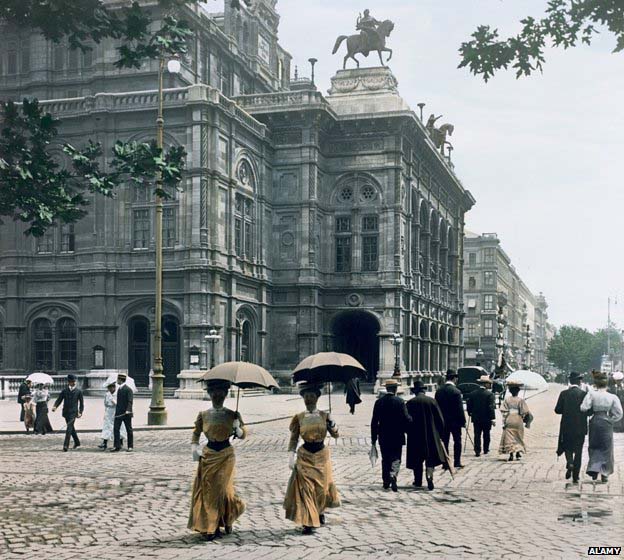 Part I: My Father’s Journey During The Great War

WWI broke out when Norbert Schiller’s Viennese father was just 14. His penchant for the theatrical served him well after he was drafted, and his only brush with death came while he was walking back to Vienna after the war had ended.

One hundred years ago this month, World War I officially began when German troops marched into Luxemburg and Belgium. The assassination of Archduke Franz Ferdinand, the heir to the Austro-Hungarian throne, and his wife Sophie in Sarajevo a month earlier was the spark that set the European continent ablaze. Looking back, it’s amazing that after centuries of relentless warfare, and two devastating World Wars, Europe has emerged as a role model where people from different cultures can live together in relative harmony.

When World War I broke out, my father, Norbert Schiller Sr., was 14 years old and most probably enjoying his summer holidays. His favorite pastime was playacting, but like most boys his age growing up in Vienna, he also loved playing fußball. (In fact, after immigrating to the United States decades later, he could never understand why Americans called their favorite sport “football” when the ball rarely touched the players’ feet.)

My father grew up in the 12th district of Vienna, a lower-middle class neighborhood that was home to many migrants from different regions of the Austro-Hungarian Empire. My grandfather, Ignaz, owned a soda shop adjacent to the family’s tiny ground floor apartment. Besides my father, my grandparents had two older daughters. I doubt that my father and his family noticed much change when hostilities broke out in the summer of 1914, but for other families with older sons, the impact was immediate. As alliances formed across Europe and battle lines were drawn, the “Imperial Army” set out on a mission to recruit as many young men as possible for the war effort. Even though there was some reluctance throughout the vast empire, the army managed to recruit nearly 80 percent of all eligible males. I doubt that my father had much fear of being drafted because it was difficult to imagine then that the war would last until he turned 18.

With the exception of young men showing up at recruitment centers, there was little noticeable change in the Viennese lifestyle. Summer was a time for going outside, listening to music, watching the Kasperltheater (outdoor children’s theater), going to dance halls, and spending time at the Wurstelprater with its iconic Ferris wheel and other attractions. Families swam in the Danube, strolled along Ringstrasse and took long walks in the Wiener Prater, a giant park at the edge of the city that was once the private hunting grounds of the Hapsburgs.

Foreigners in Vienna, on the other hand, became viewed with suspicion as the summer wore on. I recently read a journal by Jane Abbott, the wife of Dr. Donald Putnam Abbott, an American physician doing research in the capital. At one point friends told them not to speak English in public for fear that they may be arrested as spies. She recounts one incident when they “were severely questioned by a soldier.” She also writes that by the beginning of August there were army encampments throughout the city.

I am not exactly sure when or how my father’s theatrical talents were discovered, but I suspect that it must have been during his Gymnasium (high school) years. At 18, he was drafted into the army, but unlike the many other young recruits, he was not sent off to war. Instead, he was ordered to stay behind and, as he put it, “entertain the top brass.” He read Shakespeare and Goethe, and performed one act plays for the military high command.

However, his role as entertainer came to an end in the autumn of 1918 and he found himself on a train bound for one of the frontlines. Sometime during the long journey, the train ferrying the soldiers came to an abrupt stop. At first, the passengers did not think much of it, and they quietly waited for the train to restart. After hours of waiting, they heard a sudden commotion outside. My father poked his head out through a window and saw recruits celebrating. Someone yelled that the war was over and apparently the train engineers had abandoned ship.

Having lost their mode of transportation, the young recruits were forced to make their way back home on foot. My father told me that while his acting abilities had saved him from fighting in the war, he “nearly died on the long walk back to Vienna.” The weather had been particularly severe that fall and much of the ground was blanketed in snow. Somewhere along the way, my father fell deathly ill and, as he put it, “If it wasn’t for the kindness of a farmer and his wife who took me in, I probably would not be alive today.”

When my father finally arrived back home, Emperor Charles I had relinquished his throne and the parliament had appointed Karl Renner as the provisional chancellor of the new German-speaking Republic of German-Austria. If life in the capital had been normal at the beginning of the war, it was anything but four years later. So much of the empire’s resources had been diverted toward the military effort that by the time the hostilities were over, very little was left for the populace. Vienna went from being the glamorous capital of a vast empire to a very big city governing a small country. The German-speaking part had been so dependent on the territories for basic goods that when the empire splintered, Vienna and the German-Austria republic were left economically shattered. Food shortages, disease and discontent among the working classes and the poor were at an all-time high.

After the war, my father enrolled at the University of Music and Performing Arts in Vienna. In 1922, at the age of 22, he auditioned at the city’s Burgtheater and following a short stint there, he went on to Lubeck, Berlin, Frankfurt and Munich to become one of the biggest names on the German stage.

During the interwar period, there was little sign that peace and stability would prevail. The Treaty of Versailles succeeded in doing two things: humiliating Germany and its allies and ending any chance for reconciliation between the warring parties. First, Germany had to take full responsibility for all the damage that resulted from the war. Then it was forced to disarm, make large territorial concessions, and pay a staggering amount in reparations. This one-sided peace accord was viewed as degrading by the losing party and it was clear that it would only be a matter of years before the drums of war would be heard again throughout the European continent.

Who Wrote The Balfour Declaration And Why: The World War I Connection