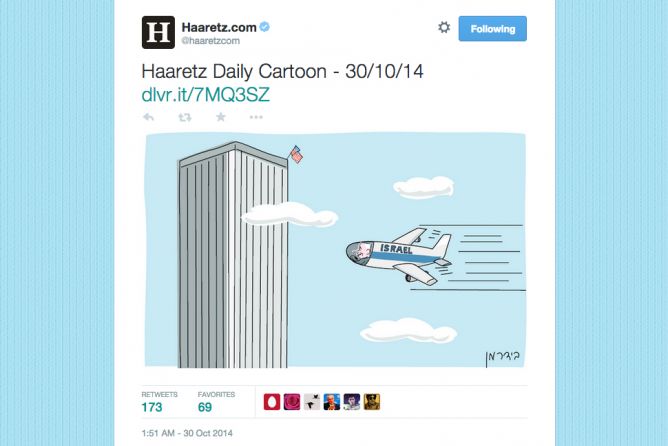 An Israeli newspaper published this stupid 9/11 cartoon. Here’s the REAL reason you should be mad

That was probably the experience readers of Ha’aretz, a left-leaning Israeli newspaper, had today when they discovered this cartoon, which shows Prime Minister Benjamin Netanyahu flying an airplane into one of the World Trade Center towers. Below the cartoon, editors wrote “US-Israel tensions: The crisis with Washington is here to stay” and linked to an article about the ongoing and building conflicts between Netanyahu’s and Barack Obama’s administrations.

The response has been what you’d expect: It’s disgusting, tasteless, and irresponsible. It — probably unintentionally —rehashes anti-Semitic 9/11 conspiracy theories. And as far as political cartoons go, it doesn’t make a great deal of sense.

Those are all fine reasons to be annoyed by it. But for people who genuinely care about US policies with respect to Israel, Palestine, and the Middle East more broadly, the real reason to be perturbed is that it’s a massive, unnecessary distraction from a serious diplomatic problem and from a crisis on the ground in East Jerusalem that’s set to explode.

Even the cartoonist, Amos Biderman, must feel that way, given that he was trying to mount a critique of Netanyahu and instead created a controversy that is, at the end of the day, stupid. Biderman told the Times of Israel that he was trying to convey his belief that Netanyahu’s policies and personal behavior could lead to “a disaster in Israel-US relations on the scale of 9/11.” He was also responding to recent controversy over the fact that a senior Obama official told the Atlantic that Netanyahu is a “chickenshit” — another distraction from the very critique that official was trying to make.

So, what should we be talking about INSTEAD of tweeting outrage at this cartoon?

Let’s talk about money and friendship: like the fact that every year the United States gives $3.1 billion in aid to Israel even as the relationship between the Obama and Netanyahu administration has reached what people in the know are calling a “full-blown crisis.” Up to 25 percent of Israel’s military spending comes from the pockets of US tax payers, and given how it got used this summer in Gaza, it’s time for a conversation.

In case the cartoon has pushed all other Israel news out of your Twitter feed, here’s what’s happening.

Netanyahu is pushing ahead with 1,000 new settler homes in East Jerusalem, a tinderbox of an area that Israel has occupied since 1967 and that many Palestinians consider their own capital city. The Obama administration tried to get Netanyahu to abandon support for the settlements, but apparently $3.1 billion doesn’t buy much influence these days.

Settlers aren’t just building new homes. In villages like Silwan, they are purposefully displacing Palestinian families, as Reuters has reported. The new settlements and police protection for settlers has led to clashes between Palestinians and Israeli security forces.

Rising tensions led Israeli security forces to briefly close Al Aqsa mosque, a move that Palestinian President Mahmoud Abbas called a “declaration of war.” Al Asqa mosque has long been a site of conflict between Palestinians and Israelis. It’s not only an extremely holy site for Muslims, but for Jews, as well, who call the site Temple Mount. Some right-wing extremists in Israel would like to see the mosque destroyed and a temple built in its place. But increasing Jewish presence at the site and using Israeli security forces to control it are very much in the mainstream. Currently, only Muslims may enter the mosque, but a new Israeli law might lift those restrictions, dividing the mosque into two separate parts for Jewish and Muslim worshippers, like the Ibrahim mosque in Hebron.

The shutdown of Al Aqsa came after a failed assassination attempt on an Israel-American activist whose organization strives to “liberate” the holy site from Islamic “occupation.” Israeli security forces then shot and killed a 32-year-old Palestinian man they believed was responsible for the assassination. Violent clashes between Israeli police and Palestinians erupted, as you’d expect, but when you hear about these “clashes,” keep in mind the power dynamics at work in this conflict over Al Aqsa. Only one side has an army and the power to shutter one of the holiest places in the Muslim faith.

So, how about that cartoon?