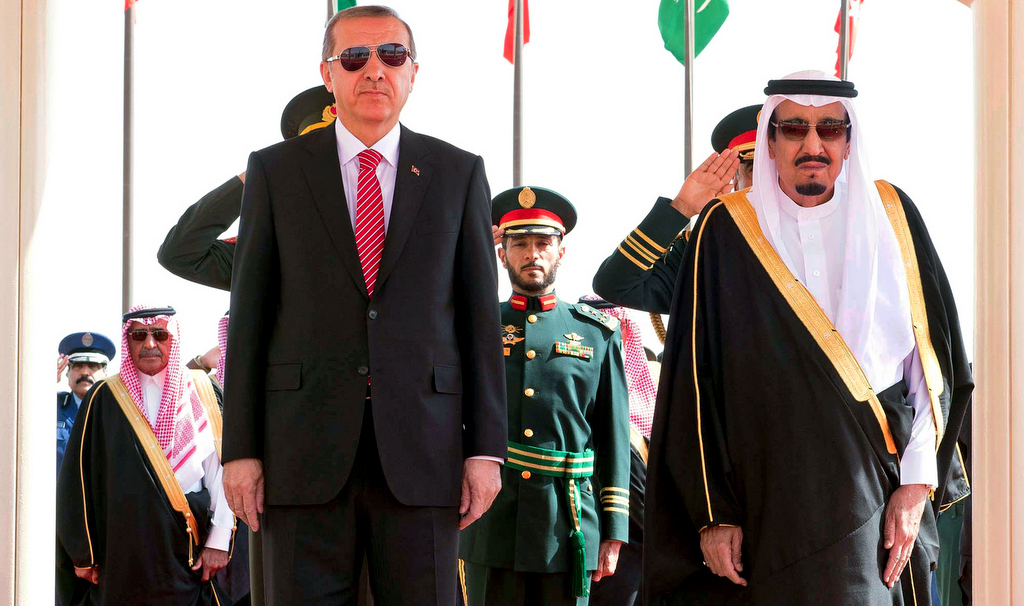 Erdogan’s purge took a dark turn when the Erdoğan government moved beyond ferreting out coup supporters in the military. Soldiers, police, judges, civil servants, teachers, and others—over 60,000 people so far—have been suspended, terminated, or detained, and a putatively temporary prohibition on international travel for all academics is now in effect.

(ANTIMEDIA) Turkey — A totalitarian crackdown of epic proportions is underway in Turkey following a failed military coup attempt—itself the subject of conjecture across social and news media to have presented the prime opportunity for President Recep Tayyip Erdoğan to consolidate power by purging dissenters.

But that purge took a dark turn when the Erdoğan government moved beyond ferreting out coup supporters in the military. Soldiers, police, judges, civil servants, teachers, and others—over 60,000 people so far—have been suspended, terminated, or detained, and a putatively temporary prohibition on international travel for all academics is now in effect.

At this time, around 1,577 university heads of faculty, 20,000 teachers, and 15,000 officials in the Turkish education ministry have been pressured to resign.

“Universities have always been crucial for military juntas in Turkey and certain individuals are believed to be in contact with cells within the military,” an unnamed Turkish official stated in state-run media, citedby Reuters.

On Wednesday, 99 of the nation’s 356 top military officers, described as generals and admirals, as well as two members of the Turkish high court, were formally charged, though no further information has yet been made available.

In an effort to harshly punish those responsible for the insurrection, Erdoğan stated Sunday there should be “no delay” in reinstating the country’s death penalty, formally abolished in 2004—though the move would present a major roadblock in negotiations for Turkey to join the European Union.

Erdoğan believes these tens of thousands of suspended, terminated, and purged individuals to be associated with alleged coup mastermind, exiled cleric Fethullah Gülen. Repeated demands from the Turkish government for the cleric’s extradition have been met with steadfast refusal from U.S. officials, who cite a lack of solid evidence Gülen had any involvement in the attempted coup.

As soon as the insurgency appeared destined to fail, Erdoğan began flushing out those in the military and security forces believed to be sympathetic or supportive of the attempt; but the seemingly maniacal ‘cleansing’ branched out to include all areas of civilian infrastructure—anyone thought to be associated with the plot, Gülen, or both.

At one time, Erdoğan and the Gülenists, as the cleric’s supporters are called, shared common ground in support of the President’s “Islamic-leaning Justice and Development (AK) party when it was founded on a pro-European and business-friendly platform in the wake of a 1997 coup,” the Guardian explained.

“There was an overlap [with] Erdogan’s political party,” noted a Gülenist sympathizer and journalist who asked that his name be withheld in light of the ongoing purge.

But following a previous purge of opposition supporters—which, notably, turned into a witch hunt similar to the present cleansing—the relationship between Gülenists, or Hizmet movement, and Erdoğan began to break down.

Erdoğan’s sweep of government and civilian infrastructure sparked concerns from human rights advocates and other observers around the world, some of whom warned the purge has targeted or will target journalists and media organizations—evidenced by a suspected blackout of social media as the coup was in full swing.

“We are witnessing a crackdown of exceptional proportions in Turkey at the moment,” cautioned Amnesty International researcher on Turkey, Andrew Gardner, the BBC reported.

“While it is understandable, and legitimate, that the government wishes to investigate and punish those responsible for this bloody coup attempt, they must abide by the rule of law and respect freedom of expression.”

Nevertheless, censorship continued when Turkey blocked access to the Wikileaks website after the the organization released some 300,000 documents of internal communications among the AKP ruling government. Though Wikileaks warned Turkish censorship would be nearly inevitable, the site came under “sustained attack” from an unknown source just prior to the leak.

Wikileaks stated that though the source of the emails and documents was not linked to the coup, a decision to push the release date forward came in response to the ongoing purge.

According to Turkish media cited by the BBC, the exhaustive crackdown has seen 15,200 staff from the education ministry fired; the revocation of licenses for 21,000 teachers; 1,577 university deans told to quit; the firings of 1,500 finance ministry staff; 8,000 police removed from office; 257 of the Prime Minister’s staff fired; 99 generals and admirals charged; and the prohibition on international flights by academics for the reported purpose of preventing any coup plotters or sympathizers from escaping.

Though Kurdish rebels received a break from attacks by Turkish government forces during and after the coup, cross-border airstrikes against rebel targets recommenced on Wednesday, killing 20 alleged militants in northern Iraq.

An announcement of emergency measures to increase security and reinforce the nation’s financial situation is expected from Erdoğan at some point today.

This article (Turkey Makes Major Shift Toward Totalitarianism in Wake of Failed Coup) is free and open source. You have permission to republish this article under a Creative Commons license with attribution to Claire Bernish andtheAntiMedia.org. Anti-Media Radio airs weeknights at 11pm Eastern/8pm Pacific. If you spot a typo, emailedits@theantimedia.org.