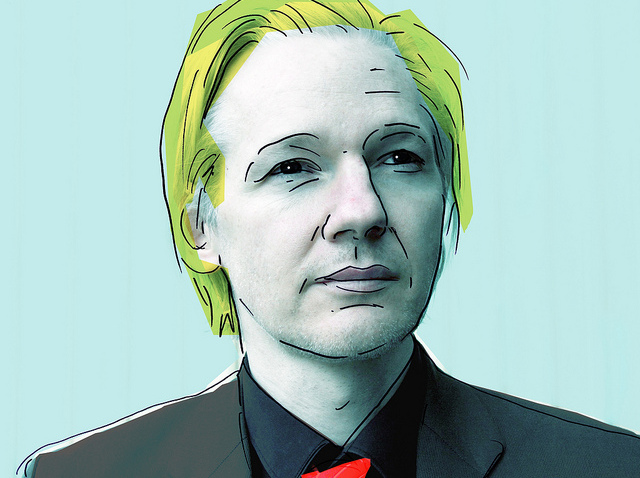 Despite investigation, fed. prosecutors have not filed sealed indictment against Wikileaks founder.

A sketch photo of Julian Assange. (Photo/Mataparda via Flickr)

Here’s a question. Why is Julian Assange still holed up in the Ecuador Embassy? With only a reduced charge of suspicion of rape of a lesser degree, and no sealed U.S. indictment filed against the Wikileaks founder– why is Assange still being pursued by the international community as the world’s most wanted?

Despite the finest juridical minds in Washington’s working to extradite and prosecute Julian Assange, the Obama administration has been derailed again.

The Washington Post revealed that after three years of a federal grand jury investigation examining alleged contacts between Wikileaks operatives, including Assange, and Bradley Manning, a U.S. Army private currently serving a 35-year sentence for the unauthorized disclosure of thousands of U.S. government documents; the U.S. has not filed charges against Assange.

In close door hearings, the federal grand jury investigation alluded to evidence purporting to link Manning to Assange. Legal experts said that it showed prosecutors were trying to build a conspiracy case against Assange.

Based on emails hacked from a Texas consulting firm, Assange claimed that U.S. authorities issued a secret indictment against him. In an interview with Rolling Stone in early 2012, Assange commented on the secretive investigation of the grand jury.

“The investigation has involved most of the U.S. intelligence apparatus, the FBI, the State Department, the United States Army. It has subpoenaed the records of most of my U.S. friends or acquaintances,” Assange said. “Under what are called Patriot Act production orders, the government has also asked for their Twitter records, Google accounts and individual ISPs. The laws which they’re working toward an indictment on are the Espionage Act of 1917 and the Computer Fraud and Abuse Act of 1986.”

Through reports obtained by the Washington Post, it appears that federal prosecutors have not filed a sealed indictment against Assange, but have concentrated its juridical power on fellow whistleblower Edward Snowden. But that’s not to say that the grand jury will not charge Assange in the future.

Commenting on the three-year investigation, federal officials said the grand jury investigation has not been closed.

Kristinn Hrafnsson, spokesman for WikiLeaks, said the organization drew no comfort from the fact that there was no sealed indictment.

“We will treat this news with skepticism short of an open, official, formal confirmation that the U.S. government is not going to prosecute WikiLeaks,” Hrafnsson told the Washington Post. “It is quite obvious that you can shake up an indictment in a very short period of time.”

Little is known about the grand jury investigation held in Alexandria, Va. Individuals linked to Wikileaks have been subpoenaed to testify. In three years, the federal investigation has amassed evidence, but so far the U.S seems unable, or perhaps unwilling, to take further steps to extradite and prosecute him.

Do they know something we don’t?

In May, Assange was embroiled in another international dispute. This time it appeared to target both him and Ecuador Foreign Minister Ricardo Patino.

Patino found a microphone during a routine search of the embassy ahead of his visit to London, according to the Guardian, where he was soon to have a meeting with British Foreign Secretary William Hague regarding Assange.

Patino said he did not bring up the microphone during talks because he feared the meeting’s focus would be diverted from political asylum of Assange.

Yet the primary question lingered — does the U.S. possess sufficient evidence to charge Assange, or would charging him under the Espionage Act make him a martyr?

The Justice Department has already charged former National Security Agency contractor Edward Snowdon with an unsealed indictment under the Espionage Act. Snowden, who fled to Hong Kong and then Russia, leaked tens of thousands of documents about U.S. surveillance programs that have led to reports of U.S. surveillance on world leaders and civilians around the world.

So why hasn’t the U.S charged Assange under the Espionage Act? Obama administration officials remain divided over the wisdom of prosecuting Assange. Commentators believe the likelihood of the U.S. pressing criminal charges against him is probably decreasing.

With no real urgency from the Swedish government to extradite Assange on sexual assault charges, it appears, in theory, that Assange should be free to leave the embassy without fear of persecution. But Assange won’t leave Ecuador Embassy any time soon, as he fears new charges may emerge.

In the Rolling Stone interview, Assange revealed he spoke to a source he referred to as a Western intelligence official. When he inquired about his fate — whether he would ever be a free man again, he didn’t receive the answer he would have liked. “He told me I was fucked,” Assange said.