Why Aren’t Negotiations Being Considered to Resolve the Humanitarian Crisis in Yemen?

Opinion — From the moment that the Saudi-led onslaught against Yemen began, the USA has been solidly behind Riyadh. Yemen now faces a humanitarian crisis, yet the forces committed to sovereignty and economic development remain strong, nowhere near surrender. Signs now indicate that as the war continues, some circles within the US power structure may be looking at other options, including negotiations.

US media routinely distorts the conflict in Yemen. The primary narrative is that the war is a complex, internal matter with scores of different factions competing for power. Typical US media reports on the conflict in Yemen overload the reader with references, mentioning “the Houthis”, Saleh, Al-Queda, ISIS, tribal forces, etc.; leaving the reader with the impression that Yemen is simply a disastrous mess of armed factions killing each other in ways that are beyond comprehension.

In addition to the primary narrative, more explicitly hawkish publications, specifically a hardline minority in the US press closely tied to Israel and Saudi Arabia, will repeat an even more distorted narrative. FOX News and the Wall Street Journal, both part of News Corporation, which is partially owned by Saudi Arabia, will often tell a story about Iranian imperialism. They present the war as Saudi Arabia fighting off an attempt by the Islamic Republic to colonize its neighbor.

Both of these narratives distort reality. The war in Yemen is not a deeply complicated mess, and it is not a proxy war with Iran. The war in Yemen is a struggle by one of the poorest countries in the world to assert its independence. Saudi Arabia, aligned with the United States, is fighting to keep Yemen an impoverished, underdeveloped satellite state. Houthi rebels ride on a pickup truck as they attend a gathering aimed at mobilizing more fighters into battlefronts in several Yemeni cities, in Sanaa, Yemen. June 20, 2016.

There is no political organization in Yemen called “The Houthis.” “Houthi” is a family name associated with certain tribal entities located in the deeply impoverished northern regions of the country, where the Zaidi interpretation of Shia Islam is practiced by a religious minority.

When US media refers to “Houthis” they are using a derogatory moniker for the political, religious, and military organization called Ansarullah (Ansar Allah). The religious movement was founded by Hussein Badreddin al-Houthi. The name “Ansar Allah” literally means “supporters of God” or “helpers of God.” It should be noted that Muslims generally refer to the disciples of Jesus Christ as “Ansar Allah.” The religious movement led by the now deceased Hussein Badreddin al-Houthi vehemently opposed the US invasion of Iraq in 2002. In 2004, the group was forced to engage in military self-defense due to violent suppression by the Saudi backed central government. During the 2011 “Arab Spring” uprisings, the Ansarullah organization gained prominence and made many allies among the wider Yemeni population.

US media has worked endlessly to obscure the fact that a broad coalition is fighting against US-Saudi domination of Yemen. By branding all of the forces in Yemen resisting the Saudi onslaught as “Houthis” they obscure the nature of the conflict, and reduce it to an ethnic or tribal one.

However, Yemen is nearly unified in opposition to Saudi attack. Mansour Hadi, the President which the Revolutionary Committee deposed, took power in a sham election in which he was the only candidate on the ballot. The Yemeni people have continued to fight for two years against the fourth largest military in the world, because they are determined not to have this Saudi puppet who preaches bigoted Sunni sectarianism, dividing the population, put back in charge.

What Does The Revolutionary Committee Want? 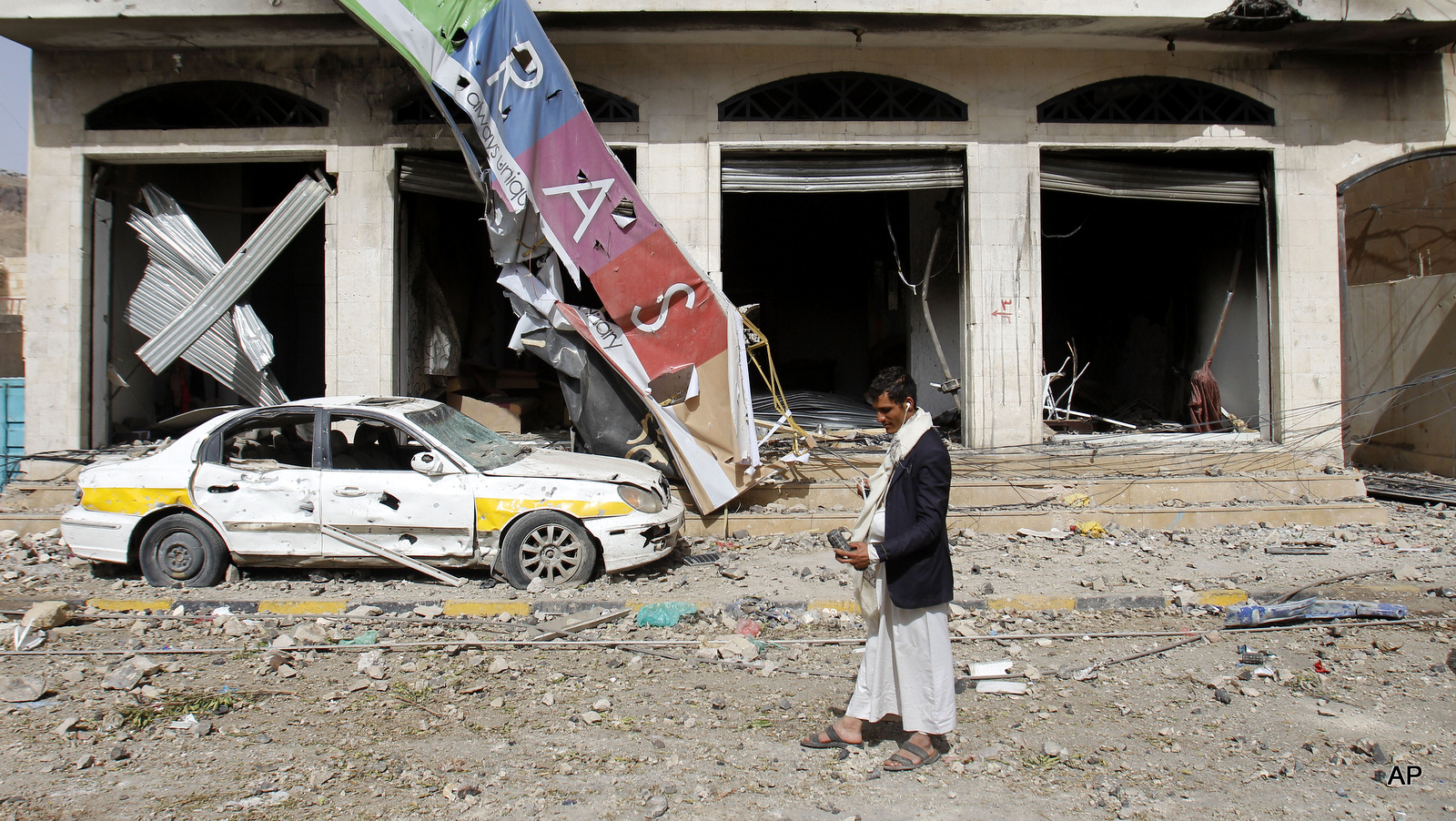 A street is littered with debris after a Saudi-led airstrike against Shia rebels, known as Houthis, in Yemen’s capital, April 20, 2015. (AP/Hani Mohammed)

Yemen is one of the poorest countries in the entire world. Before the war began, conditions for the population of Yemen were already bleak. According to the CIA world Factbook statistics, published in 2012, nearly 30% of the population is illiterate. The rate of infant mortality in 2012 was roughly 47 deaths per 1000 live births. The country had only approximately 1 doctor for every 4,000 people. Only 54.4% of the population had access to improved drinking water. 40% of the country’s children were underweight.

Now, as Saudi Arabia unleashes death and destruction against the population, 7 million people are living close to famine. 600,000 have been infected by cholera, due to unclean drinking water after Saudi bombs and missiles destroyed the already inadequate water treatment facilities. As they continue to slaughter Yemeni civilians, the Saudis have made it unsafe for civilian aircraft or ships to deliver humanitarian assistance. One in three people in the country is now experiencing food shortages.

The number of civilians who have died as a result of Saudi Arabia’s ruthless “foreign meddling” is in the tens of thousands. US leaders endlessly demonize governments around the world that challenge their power, yet the entire US political establishment, from Obama, to Hillary Clinton, to Donald Trump, has embraced the Saudi monarchy. The world watches as the fourth largest military on the planet flaunts international law and UN resolutions, and devastates its southern neighbor.

Why do the people of Yemen continue to fight in the face of so much suffering? If the war were merely the result of paid Iranian mercenaries, it would have ended long ago.

A clue as to what Yemenis are fighting for can be found on the logo of the Ansarullah organization. Alongside the image of a hand pointing to the sky, a reference to God, and a fire-arm, representing armed self-defense, the logo of the Ansarullah organization contains a shaft of wheat. When I was in the Gulf of Aden with medical aid workers who had been in Yemen, it was explained to me that this shaft of wheat represents economic development.

The Revolutionary Committee is fighting to break Yemen out of Saudi domination. Yemen has untapped oil resources, minerals, and a population of 28 million people. The reason it remains poor is not because of some unfortunate circumstances. The poverty of Yemen is caused by foreign domination, keeping them in a state of chronic underdevelopment. Saudi Arabia is bombing and destroying Yemen in order to keep it poor, and restore their handpicked stooge, Mansour Hadi, to the Presidential throne.

Are Negotiations In The Works? US military Generals have advised the Saudi army in Riyadh. Saudi planes have been refueled by US warplanes. The USA has sold Saudi Arabia billions of dollars worth of weapons to continue their war crimes, and satellite support has also been provided.

However, a recent article written by Harvard University research fellow Asher Orkaby seems to show a potential change in US orientation toward the conflict. The Council on Foreign Relations, a very influential Wall Street-backed think tank, is one of the key crafters of US foreign policy strategy. Writing in the CFR’s “Foreign Affairs” magazine, Orkaby makes some shocking admissions about Yemen.

While Orkaby repeats some of the distortions about “Houthis” and “Northern Tribes,” he outright dismisses the FOX news narrative of Iranian proxies saying “there is no real Houthi-Iranian alliance,” and “the true target of the Saudi campaign is not Iran but the Houthis themselves.” Orkaby goes on to admit Saudi Arabia’s real relationship with its neighbor, saying “each time a popular movement or a strong central authority has looked as though it were appearing in Yemen, the Saudi government has responded with military action and financial support for pro-Saudi groups.”

The article, published in one of the most widely read foreign policy publications, goes on to suggest that the Yemeni resistance has “little intention” of fighting the USA or Israel, and points out that the Revolutionary Committee is fighting against ISIS and Al-Queda, at the same time they face Saudi onslaught.

Orkaby goes on to raise the idea that perhaps negotiations between the Yemeni Revolutionary Committee and the Saudi invaders may not be completely absurd.

It is possible that within the secretive internal discussions of the Council on Foreign Relations, accurately described as the CIA’s brain, negotiations and efforts to stop the Saudi onslaught are being considered. The publication of an article containing such glaring admissions about the true nature of the conflict is not accidental.

Openness to negotiations is probably based on the fact that the Yemeni Revolutionary Committee is not going to surrender. Despite the fourth largest military on earth, aligned with NATO and Washington, subjecting the people of Yemen to bombing, blockade, and invasion, the Yemenis continue to fight. The most powerful forces in the world have created a humanitarian crisis, and have taken thousands of innocent lives, but they have not defeated the Revolutionary Committee, which clearly has a huge base of support among the religiously diverse population.

As hopes of crushing Yemen’s aspirations for independence with brute force have failed, a strategic recalculation may very well be taking place behind closed doors in Riyadh and Washington.

Top photo | A young boy who lost his leg in the Saudi war in Yemen war uses a prosthetic limb at a government-run rehabilitation center in Sanaa, Yemen, March 5, 2016. (AP Photo)