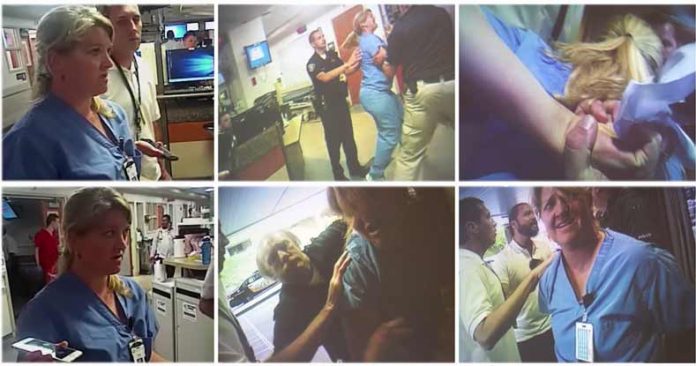 A Salt Lake City nurse was violently arrested by a frustrated detective after she refused to obtain a blood sample from an unconscious patient without a search warrant.

For refusing to do the illegal bidding of a Salt Lake City police detective, a University Hospital nurse was assaulted and arrested. Now, she is showing the public the video of the attack to let them know how untrained in the law some officers can be and how this can lead to innocent people having their rights violated.

The footage is from an incident on July 26. It is from University Hospital and officer body cameras and it shows Detective Jeff Payne attempting to convince nurse Alex Wubbels to get a blood sample from a patient who’d been injured in a fatal car accident.

In the video, Wubbels is attempting to explain to the officer that blood cannot be taken from an unconscious patient unless there is a warrant, the patient is under arrest, or the patient consents. None of these factors were present at the time Payne was demanding blood, so Wubbles was merely following the law.

This infuriated the detective, who at one point during the conversation resorted to making threats against Wubbles.

“I either go away with blood in vials or body in tow,” Payne says.

Wubbles confirms with several hospital officials and again tells Payne that it is against the law to draw the victim’s blood. Instead of simply obeying the law, Payne chose to assault and kidnap the nurse.

“Help! Help! Somebody help me! Stop! Stop! I did nothing wrong!” Wubbles screams as her assailant handcuffs her, drags her to his patrol car, and shoves her inside.

Naturally, neither of the other two officers who witnessed the illegal kidnapping and assault chose to intervene.

After Payne arrests Wubbles, he then begins planning his spiteful revenge on the rest of the hospital for refusing to break the law.

“I’ll bring them all the transients and take good patients elsewhere,” Payne says.

In spite of kidnapping an innocent woman on video for the sole act of refusing to break the law for a cop, Payne has yet to face any punishment. The only thing that happened to him was that he was temporarily suspended from the department’s blood-draw program that teaches cops how to get blood samples. However, he remains on regular duty.

As the Salt Lake City Tribune reports, in a written report, Payne said he was responding to a request from Logan police to get the blood sample, to determine whether the patient had illicit substances in his system at the time of the crash. Payne explained the “exigent circumstances and implied consent law” to Wubbels, but, according to his report, she said “her policies won’t allow me to obtain the blood sample without a warrant.”

Payne then passed the buck  Lt. James Tracy, whom he blamed for telling him to get the blood sample. Tracy did not deny this either. In his report, Tracy explained that he spoke with Wubbels on the phone and attempted to convince her to take the blood too, noting that they had “implied consent.”

Kara Porter, an attorney representing Wubbels, told the Tribune, however, that “implied consent” has not been the law in Utah since 2007, and the U.S. Supreme Court ruled in 2016 that the Constitution permits warrantless breath tests in drunken-driving arrests, but not warrantless blood tests. She stressed that the patient was always considered the victim in the case and never was suspected of wrongdoing.

What’s more, the aggressive attitude of police to take blood from the victim could’ve been to protect themselves from liability for potentially causing the fatal crash that put the victim in the hospital in the first place.

At 2 pm that day, the victim, William Gray, a truck driver and part time police officer, was driving his semi down Hwy 89. Suddenly, Marcos Torres, 26 came barrelling down the road, crashing into Gray’s truck head on. Torres died at the scene.

Police were in pursuit of Torres at that time. They gave chase after receiving reports of Torres driving recklessly. Perhaps, they wanted to find something in Gray’s system as a means of alleviating any potential liability for causing the deadly crash.

Related | 2017 Deadliest On Record For Killings By Police

For standing up to this bully cop, Wubbels, who competed on the 1998 and 2002 American Winter Olympics team and has no criminal record, deserves commendation. TFTP salutes nurse Wubbels for her bravery in the face of tyranny.

“I can’t sit on this video and not attempt to speak out both to re-educate and inform,” she said. Police agencies “need to be having conversations about what is appropriate intervention.”

Not My Job: Police Assert Workers’ Rights to not Wear Body-Cams

Police Body Cameras Solve One Problem But Create Others