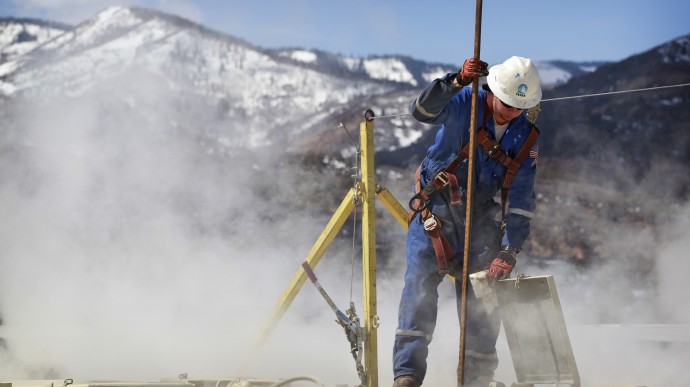 A worker checks a dipstick to check water levels and temperatures in a series of tanks at an Encana Oil & Gas (USA) Inc. hydraulic fracturing operation at a gas drilling site outside Rifle, Colorado. (AP/Brennan Linsley)

Industrial waste from fracking sites is leaving a “legacy of radioactivity” across the country as the drilling boom churns out more and more toxic byproducts with little to no oversight of the disposal process, critics warn.

According to a new report in Bloomberg Wednesday, the controversial oil and gas drilling process known as hydraulic fracturing is “spinning off thousands of tons of low-level radioactive trash,” which has spawned a “surge” in illegal dumping at hundreds of sites in the U.S.

“We have many more wells, producing at an accelerating rate, and for each of them there’s a higher volume of waste,” Avner Vengosh, a professor of geochemistry at Duke University in Durham, North Carolina, told Bloomberg. Without proper handling, “we are actually building up a legacy of radioactivity in hundreds of points where people have had leaks or spills around the country.”

Some states allow the contaminated material to be buried at the drill site. Some is hauled away, with varying requirements for tracking the waste. Some ends up in roadside ditches, garbage dumpsters or is taken to landfills in violation of local rules, said Scott Radig, director of the North Dakota Health Department’s Division of Waste Management.

In that state’s Bakken oilfields, “it’s a wink-and-a-nod situation,” said Darrell Dorgan, a spokesman for the North Dakota Energy Industry Waste Coalition, a group lobbying for stricter rules. “There’s hundreds of thousands of square miles in northwestern North Dakota and a lot of it is isolated. Nobody’s looking at where all of it is going.”

In one recent example piles of garbage bags filled with radioactive debris from a nearby site —including radioactive filter socks that are used to strain wastewater from wells—were found in an abandoned building in North Dakota.

Those radioactive elements often mix with wastewater and a list of undisclosed chemicals used in the process. Past reports have shown that water treatment does little to clean this toxic water. In one recent case, wastewater from a hydraulic fracturing site in Pennsylvania, which is treated and released into local streams, was found to have elevated levels of radioactivity in the public water supply.

When radioactive fracking waste is not dumped illegally or buried on site, it is brought with other waste to landfills, but the skyrocketing amounts of fracking waste are pushing those sites to their limits.

“West Virginia landfills accepted 721,000 tons of drilling debris in 2013, a figure that doesn’t include loads rejected because they topped radiation limits,” reports Bloomberg. And in Pennsylvania the industry sent 1.3 million tons to landfills last year, including 16,000 tons of radioactive material.

While some states such as North Dakota scramble to deal with the growing problem, the list of reasons to halt the fracking industry altogether may become more enticing.

A report released on Monday found fracking sites are emitting up to 1000 times the amount of methane than federal regulators previously reported.

Methane is a greenhouse gas that is up to 30 times more potent than carbon dioxide.