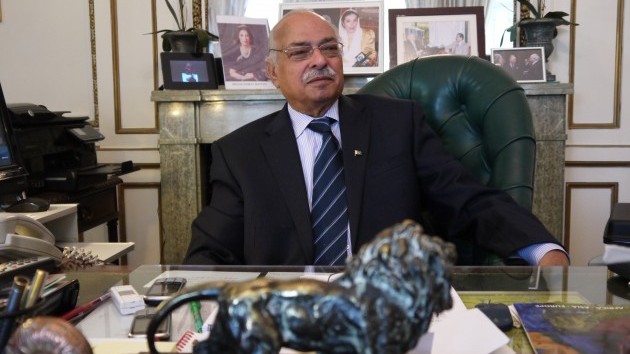 One of Islamabad’s most senior diplomats has told the Bureau of Investigative Journalism that ongoing CIA drone strikes in Pakistan’s tribal areas are weakening democracy, and risk pushing people towards extremist groups.

He also claims that some factions of the US government still prefer to work with ‘just one man’ rather than a democratically-elected government, and accuses the US of ‘talking in miles’ when it comes to democracy but of ‘moving in inches.’

As High Commissioner to London, Wajid Shamsul Hasan is one of Pakistan’s top ambassadors. Now four years into his second stint in the post, he is no stranger to controversy. In an extended interview with the Bureau, Ambassador Hasan argues that US drone strikes risk significantly weakening Pakistan’s democratic institutions:

‘What has been the whole outcome of these drone attacks is, that you have rather directly or indirectly contributed to destabilizing or undermining the democratic government. Because people really make fun of the democratic government – when you pass a resolution against drone attacks in the parliament, and nothing happens. The Americans don’t listen to you, and they continue to violate your territory.’

The army too risks being seen as impotent, he warns the United States.

‘Please don’t embarrass us by violating our territory because people question why the hell we have such a huge standing army, where we spend so much on our national defence budget, when we can’t defend ourselves?’

But he accepts that Pakistan has little power to stop the strikes other than through public opinion: ‘We cannot take on the only superpower, which is all-powerful in the world at the moment. You can’t take them on. We are a small country, we are ill-equipped.’

‘I would have killed bin Laden myself’

The High Commissioner’s comments appear part of a major public relations offensive by a Pakistani government keen to see an end to the unpopular drone strikes.

On Friday Sherry Rehman, Islamabad’s ambassador to the United States, said that ‘We will seek an end to drone strikes and there will be no compromise on that.’ The heads of Pakistan’s army and ISI spy service are also lobbying Washington to allow Pakistani forces to carry out any actual strikes against terrorists based on US intelligence.

The reason, according to Ambassador Hasan, is that anti-US sentiment is reaching dangerously high levels in Pakistan because of the drones:

‘Even those who were supporting us in the border areas have now become our enemies. They say that we are partners in these crimes against the people. So they hate us as well. They hate the Americans more. If you look at the Pakistan-US relationship, we have received a lot of money from the Americans, and yet they’re the most hated country in Pakistan among the people. By and large you will hardly find anybody who will say a word in support for the United States, because of these drone attacks.’

The High Commissioner insists that his country remains committed to the war against al Qaeda and extremism, noting the thousands of Pakistani civilians and soldiers who have died in terrorist attacks since 9/11.

The issue, he insists, is the continued violation of Pakistan’s national sovereignty by US drones: ‘This is a violation of the UN Charter, it is a clear violation of our territorial sovereignty and national integrity. These drone violations have been taking place since 2004. And the attacks have killed 2,500 to 3,000 people.’

Those numbers chime with the Bureau’s own published findings, although the High Commissioner believes that a low count of at least 482 civilians killed by the CIA is likely a conservative figure. And he rejects US claims that it has killed few civilians at all in recent years:

‘What if my neighbour got killed in a drone attack, who had nothing to do with the Taliban or al Qaeda? You can imagine how angry I must be. Because it could be me next time. So that’s the sort of reaction we have. We have got everybody, irrespective of who they are – whether liberal, progressive, secular or religious extremists or radical people – they feel like this when civilians are killed.’

‘They talk in miles but move in inches’

Mr Hasan was also scathing about what he sees as the US’s weak commitment towards democracy in Pakistan and Afghanistan. He also implies there are those in the US government who would still prefer to be dealing with a dictator:

‘They talk in miles in support of democracy, but they move in inches. They say, “We are fully for democracy, we want democracy, we support the Arab Spring, we are opposed to military interference in Egypt.” All of these things are very good. They are music to my ears. But when it comes to real politics they are different. [US Secretary of State] Hillary Clinton has really supported democracy. But she is one person. There are so many pillars of power in the United States, and they act differently. ‘

‘The United States if you look at Pakistan’s 65 year history has always preferred to deal with one man rather than with institutions. They would never like a matter to go to the parliament, to be debated there, for issues to be accountable to the parliament and the people, they don’t want that, they want one man. ‘

The High Commissioner also questioned what America has achieved in ten years of war in Afghanistan – and what it might leave behind in 2014.

‘How long have NATO troops been there in Afghanistan? Nine, ten years? And they’ve spent trillions of dollars there, but have they succeeded to clear one particular area of Taliban or al Qaeda operatives? Not a single case.’

The High Commissioner argues that Pakistan can still play a key role in negotiating peace with the Taliban – but that the US has shown little interest in offers of aid:

‘When we have been telling them that you must have a dialogue with the Taliban, good or bad, they never listen to us. Now they have started back-door diplomacy and all these backtracks through the Saudis and others. But again they’re forgetting one thing.

‘Pakistan has been one of the major players in the region, ever since the Soviets occupied Afghanistan. We have had the best relationship with those Afghans, the Taliban or whatever in the past. Couldn’t we be a better option for them to deal with those people? No – they never bothered.‘

With the US and NATO intending to withdraw from Afghanistan by 2014, Ambassador Hasan insists that Pakistan will continue the fight against Al Qaeda – but that it cannot accept US drone strikes.

‘What you have to do is win the hearts and minds of the people, to solve the local problem there in Afghanistan, to stop the drone attacks in Pakistan so the people can see that yes, they have been stopped. Now let’s build a relationship, yes let’s try to resolve this terrible issue. Let’s fight terrorism. And we are a very resilient people, we can fight it.’