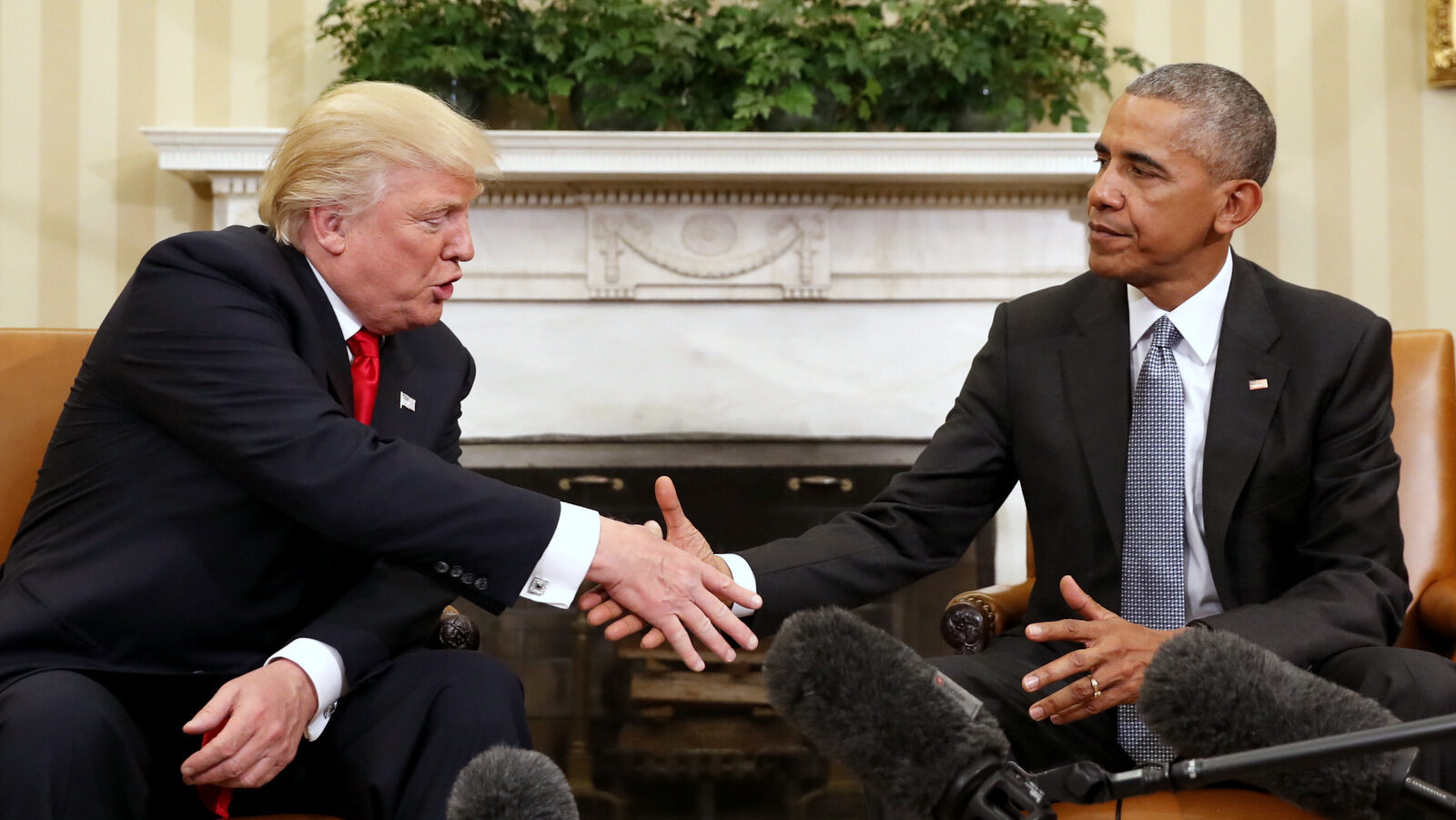 Trump, Obama And The Future Of The Targeted Killing Program

Obama developed and expanded a defining policy architecture which his successor Donald Trump now inherits: the ability to kill suspected terrorists anywhere without US personnel having to leave their bases.

(ANALYSIS) — Barack Obama’s foreign policy legacy is often discussed in terms of things he didn’t do: intervene in Syria, reset with Russia, get out of Afghanistan.

In one area however, Obama developed and expanded a defining policy architecture which his successor Donald Trump now inherits: the ability to kill suspected terrorists anywhere without US personnel having to leave their bases.

While his administration lauded the drone programme for being so “surgical and precise” it could take out the enemy without putting “innocent men, women and children in danger”, human rights groups lambasted it for doing just that – hundreds of civilians were reported killed outside active battlefields during Obama’s eight years in power.

As his presidency progressed, Obama put restraints in place aimed at reducing civilian casualties – but experts are now worried those limitations will be swept away by Trump in favour of an “anything goes to get the bad guys” approach.

Armed drones were first used under George W Bush. But it was Obama who dramatically increased their use. Responding to evolving militant threats and the greater availability of remote piloting technology, Obama ordered ten times more counter-terror strikes than his predecessor over the course of his term.

These operations have resulted in the deaths of senior terrorists such as Baitullah Mehsud, the head of the Pakistani Taliban, and Nasser al Wuhayshi, the commander of the Yemeni branch of al Qaeda. But they have also killed civilians, stoked resentment, and helped establish what civil liberties advocates say is the template for an unaccountable forever war.

Demand for drones has been so high under Obama that the Air Force has struggled to train enough new pilots to keep up with the burnout rate. This year it introduced $35,000 a year retention bonuses to try to persuade more drone pilots to stay on, working long hours in windowless rooms.

It is not just that Obama has put more of a certain type of aircraft in the skies. The low-footprint nature of drone strikes – which can be carried out without having personnel in the country being hit – made it politically easier for the US to mount operations in countries with which it was not technically at war.

The Bureau has recorded 546 strikes against suspected terrorists in Yemen, Somalia and Pakistan since Obama took office.

These operations have been run by highly secretive organisations – the Central Intelligence Agency and the Pentagon’s Joint Special Operations Command – and have been much less accountable to public scrutiny than conventional military operations. In Iraq and Syria, the Pentagon releases data on most of the strikes it carries out. But the US would neither confirm nor deny the existence of operations in Pakistan until a drone accidentally killed an American civilian in Pakistan in 2015.

The legal justification for these operations comes from one sentence in the piece of legislation passed in the wake of 9/11, which authorised action against the perpetrators and those who helped them. The president was authorised “to use all necessary and appropriate force” against the nations, organisations and people who planned and abetted the attacks, “in order to prevent any future acts of international terrorism against the United States,” the resolution stated.

In the following 15 years that authorisation was stretched to justify US action as far afield as Libya and Somalia. Hina Shamsi, director of the American Civil Liberties Union’s (ACLU) national security programme, says that the drone campaign has “no meaningful temporal or geographical limits”.

The drone programme has consistently enjoyed popular support among broad swathes of US society. Its advocates say it has saved American lives and reduced the need for messy ground operations like the 2003 invasion of Iraq.

But it has also caused outrage. Drones have hit hundreds of ordinary civilians going about their everyday life. Towards the peak of the covert drone war, the Bureau found reports of at least 100 civilians killed during Obama’s first year in power in Pakistan alone. Across his eight years in power the Bureau has recorded between 384 and 807 civilians killed by drones in Pakistan, Yemen, and Somalia. (The Obama administration insists the drone war civilian death toll is substantially lower than that recorded by the Bureau and other civil society organisations.)

Experts warned the civilian casualties could have a radicalising effect on the very societies US drones are trying to eliminate extremists from, and human rights organisations lambasted the targeted killing programme for its “clear violations of international humanitarian law.”

Following such criticisms, drone strike procedures seem to have changed. In 2013, Obama announced that he had signed a piece of Presidential Policy Guidance (PPG), formal policy governing kill or capture missions outside declared battlefields, including drone strikes.

It was the product of four years work, the president said in his 2013 announcement, applying a framework of “clear guidelines, oversight and accountability” to the drone war. This was lacking during the early years of his presidency, Obama said in April last year, when the US drone campaign in Pakistan peaked and the attacks were increasing in frequency in Yemen.

According to these guidelines, parts of which were published in 2016 after years of legal pressure from the American Civil Liberties Council, strikes were only approved when it had been determined that the targeted individual constituted a “continuing imminent threat”, that there was no way of capturing them, and there was near-certainty that no civilians would be killed.

Reports of civilian casualties in Pakistan plummeted from 52 in 2011 to zero by 2013, suggesting the rules Obama officially announced that year had gradually been adopted in the preceding years.

Ongoing civilian casualties in Yemen suggest the new procedures were not always robustly applied in practice. But they were cautiously welcomed by civil liberties groups as being better than no restrictions at all.

In a further bid to embed policies preventing civilian casualties before leaving office, Obama also issued an Executive Order in 2016. The order called for transparent reporting of civilian casualties in US military operations, including those outside of declared battlefields. White House insiders said the move was a direct response to continued pressure by the Bureau and other organisations which collect and publish data on drone war deaths.

The problem, as Hina Shamsi points out, is that the constraints on the drone programme instituted by Obama are “recognised as a matter of policy not of law.” This means they could be overturned by the Trump administration.

Constraints could be dismantled

Luke Hartig, formerly senior director for counter-terrorism at the National Security Council and now a fellow at the New America Foundation, identified two elements of the PPG as specifically vulnerable.

One is “the continuing, imminent threat” standard, an overarching principle that stipulates a terrorist can only be targeted if their activities pose a real and immediate danger to US citizens.

It could be scrapped because “it speaks to what some critics would say is a legalistic approach from the Obama administration,” Hartig said.

He suggested that the “near-certainty” standard might also be changed – a rule whereby a terrorist can only be taken out if there is near certainty no non-combatants will be killed or injured (except in extraordinary circumstances).

“If you’re in the Trump administration and you’re saying you’re going to be tough on terrorism, some of these standards could be perceived as tying your own hands,” Hartig said.

Hartig stressed however that the PPGs were not the only constraints on drone strikes.

“The PPG also reflects pragmatic realities about civilian casualties, the diplomatic realities surrounding the use of force, and what our operators know based on 15 years of fighting terrorist and insurgent networks,” he said.

“If you loosen the standard on civilian casualties, you may see an increase in such incidents, but it won’t be off the charts because our operators have become so good at preventing collateral damage.”

This caveat was echoed by Christopher Kolenda, a former US military commander in Afghanistan and co-author of a June paper for the Open Society Foundation on civilian casualties in the country.

“I frankly don’t see a doomsday scenario in the near term,” he told the Bureau. “This generation of senior leaders has all experienced Iraq and Afghanistan, and have all experienced the consequences of civilian harm that occurs within laws of armed conflict.

“I can’t see them taking a different approach than what they know to be right.”

Kolenda is worried about the long term however. People retire or move on and “if you don’t have things institutionalised as doctrine some of those lessons are at risk.”

What Trump is planning is anyone’s guess

No-one knows exactly what Donald Trump’s intentions are for the drone programme.

He has selected as National Security Advisor a retired general who has said the religion of Islam is a “cancer”. Michael Flynn was at the heart of the US counter-terrorism campaigns in Pakistan and Afghanistan that saw widespread use of drones. However he was also one of the voices warning that careless drone strikes only served to radicalise populations.

The President-Elect himself has made inflammatory statements while campaigning that could indicate how he will act. He told ecstatic crowds of thousands at his rallies that he would “bomb the shit” out of Islamic State.

In an interview with the Daily Mail last May he suggested he would continue the covert drone war.

What this means in practice however remains unclear.

“I don’t want to talk about it because I do want to be unpredictable in a sense,” said Trump. “I don’t want the enemy to know exactly where I’m coming from.”