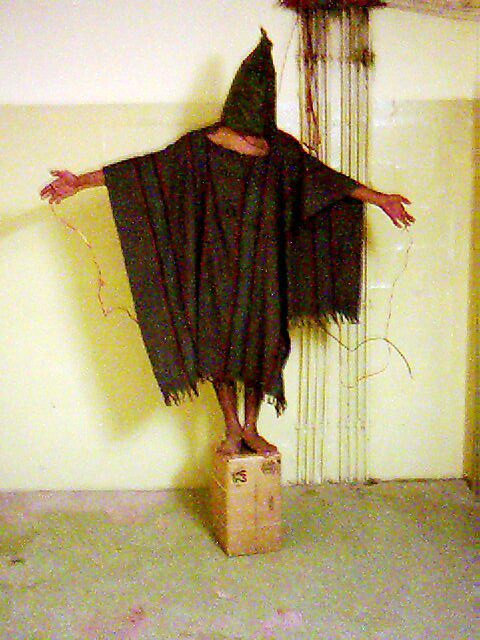 While the Republican and Democratic presidential candidates may differ on some issues, when it comes to continuing the War on Terror’s disastrous policies, not a single R or D will significantly change the path.

An unidentified detainee standing on a box with a bag on his head and wires attached to him in late 2003 at the Abu Ghraib prison in Baghdad, Iraq. (AP Photo)

As the American public prepares for a new president, it is important to reflect on the actions of the current administration so that we may avoid the mistakes of the past and the truth can be brought to light.

While the Republican and Democratic presidential candidates may differ on some issues, when it comes to continuing the War on Terror’s disastrous policies, not a single R or D will significantly change the path. This includes the use of torture. During the Obama administration a number of Americans seem to have fallen for the party line that torture has stopped and America has reasserted itself as the bastion of freedom and justice. Nothing could be further from the truth.

When running for President, Senator Obama promised to hold officials from George W. Bush’s administration accountable for the crimes perpetrated under that regime. However, in 2009, after a Department of Justice investigation was announced, President Obama and Attorney General Eric Holder stated it was “time for reflection, not retribution.” The DOJ would eventually close all investigations into alleged abuse and conclude that no charges should be brought.

Despite the Obama administration’s claim that no charges should be brought forth, members of the U.N. Committee Against Torture recently told the US that it rejects the Bush administration’s interpretations of torture law. The Committee rejected the findings of the DOJ investigation.Committee Chairman George Tugushi stated,

In our view, any investigation into possible ill treatment by public officials must comply with the criteria of thoroughness. And actually to be considered credible, it must be capable of leading to a determination of whether force or other methods used were or were not justified under the circumstances, and to the identification of the appropriate punishment of those concerned.

When pressured on the apparent failure of the investigation, US officials said they interviewed more than 90 witnesses but declined to say whether any of the witnesses were actually prisoners who had been subjected to the CIA interrogations. The Obama White House actually broke promises to help the Senate investigation into the CIA torture. The White House withheld thousands of documents from the Senate.

There have been reports boasting of executive action taken by Obama shortly after coming into office. Allegedly his executive order put an end to torture under his administration. This is also false. To be fair Obama did upgrade interrogation techniques to make sure they were in line with the US Army Field Manual and thus the Geneva Convention which has prohibited torture since 1956. However, Alternet reports that in 2006 the manual was revised to allow techniques that went beyond the Geneva Convention’s restrictions.

As pointed out by US psychologist Jeff Kaye who has worked extensively with torture victims, a new UN Committee Against Torture (UNCAT) review of the manual shows that a wide-range of torture techniques continue to be deployed by the US government, including isolation, sensory deprivation, stress positions, chemically-induced psychosis, adjustments of environmental and dietary rules, among others.

Still President Obama continues to give interviews stating that no torture has been condoned on his watch.

In December 2014, the Senate released their report on the Central Intelligence Agency’s use of torture, which revealed that the CIA continuously misled congressional and White House officials about the effectiveness and level of brutality of its methods. In June 2015, the secretary general of Amnesty International and the executive directors of the American Civil Liberties Union, and Human Rights Watch sent a letter and delivered petitions with 111,788 signatures of human rights supporters to the Department of Justice. The organizations are seeking to pressure the US government into holding officials accountable for the use of torture.

And who should be held accountable? Does the blame lay squarely on the shoulders of the president, past and present?

Late in 2014, the NY Post reported that Jose Rodriguez, who oversaw the interrogations program from 2002 to 2004, stated that all members of Congress were briefed on the programs. Rodriguez went as far as saying that House Democratic leader Nancy Pelosi was briefed on “all of the techniques … she never objected to the techniques at all.”  Rodriguez said Pelosi was specifically briefed on waterboarding and sleep deprivation. No word on whether or not she heard about Rectal Feeding.

As far back as 2010 it has been known that at least 68 members of Congress were told about the program. Watchdog organization Judicial Watch obtained formerly “Top Secret” government  documents that detail congressional briefings between 2001 and 2007.

Although most of the deadstream media has moved away from condemning the use of torture (let alone even mentioning it), there is still resistance from activists, civil liberties, and human rights groups. The Intercept recently reported that the American Civil Liberties Union (ACLU) is still fighting for the release of the full Senate report on torture. The Intercept writes:

Government lawyers on Thursday continued their fight to bury the Senate Torture Report, arguing before the D.C. District Court of Appeals that the 6,700-page text could not be released on procedural grounds. The ACLU filed for the release of the full report under the Freedom of Information Act. Thursday’s hearing centered on the question of whether the report is an “agency record,” and thus subject to FOIA. Alternatively, if the report is a “congressional record,” its disclosure cannot be requested under the statute.

But many of the most graphic details are in Volume III of the full report, which former Senate Intelligence Committee chair Dianne Feinstein has said contains ‘excruciating’ details on ‘each of the 119 known individuals who were held in CIA custody.’

The truth is, the Obama Administration has found creative legal loopholes to justify their use of techniques that are recognized internationally as torture. Recently, the Associated Press reported on a 10-page section of the Army Field Manual, a rulebook that guides government interrogations and banned torture after the 9/11 attacks, which may still allow various forms of torture. “Appendix M” is a controversial section of the manual that has been heavily criticized by human rights advocates. TheAP reports that The U.N. Committee Against Torture has expressed specific concerns about two sections of the field manual:

-Appendix M permits detainees to be limited to four hours of sleep every 24 hours for up to 30 days, or more, with permission. Doing this “amounts to authorizing sleep deprivation – a form of ill treatment – and is unrelated to the aim of … preventing communication among detainees,” the U.N. committee has told the U.S.

-Another section aims at “prolonging the shock of capture by applying goggles or blindfolds and earmuffs to generate a perception of separation.” The U.N. committee said recent scientific evidence indicates this can cause a “state of psychosis.”

The State Department has promised that neither section of the manual can be used for torture. During the fall of 2015, more than two dozen former national security, law enforcement, intelligence and interrogation professionals sent a letter to all of the presidential candidates, urging them to reject torture and cruel treatment.

Investigations by The Nation have also found the use of CIA “black sites,” or secret locations for interrogation and torture, has increased under President Obama. One investigation found secret prisons in Somalia and another facility known as “Obama’s Guantanamo.” The Bagram Theater Internment Facility in Afghanistan is reportedly home to regular beatings, loud blaring music, sleep prevention, and forced “stress positions.” Former detainees allege that there is a second, secret prison on Bagram Air Base that organizations like the Red Cross are denied access.

Probably the most blatant example of continued torture under the Obama administration is the use of force-feeding at Guantanamo Bay. Many of the remaining detainees at the prison have been cleared of wrongdoing for years yet they cannot leave because most nations are not willing to harbor formerly suspected terrorists.

VICE News reported that a two-page document obtained through the Freedom of Information Act reveals that the US military acknowledged that force-feeding violates medical ethics and international law. The document is dated June 21, 2013 and titled  “Legal Authority and Policy for Enteral Feeding at JTF-GTMO” (Joint Task Force-Guantanamo).

It is quite clear that the U.S. government is still torturing people, many of whom are likely innocent. For those who say that guilty “terrorists” deserve no protections and should indeed be tortured, I ask you to think about what you are becoming. When we reduce ourselves down to the level of our enemies, when we relinquish our principles for the possibility of security – we are becoming that which we sought to destroy. The Awakened hearts and minds of America need to take to the streets, remind the people that torture is wrong, and help humanity establish itself as a force of love and cooperation, rather than hate and division.

In 2015, The Anti Media, The Conscious Resistance Network, The Fifth Column, and other independent media organizations held 2 national actions against the use of torture. If you feel strongly about this issue we encourage you to organize similar events in your area.

Derrick Broze is an investigative journalist and liberty activist. He is the Lead Investigative Reporter forActivistPost.com and the founder of the TheConsciousResistance.com. Follow him on Twitter.