The ‘Silent Intifada’ In Jerusalem Grows Louder By The Day. Here’s How Things Got So Bad 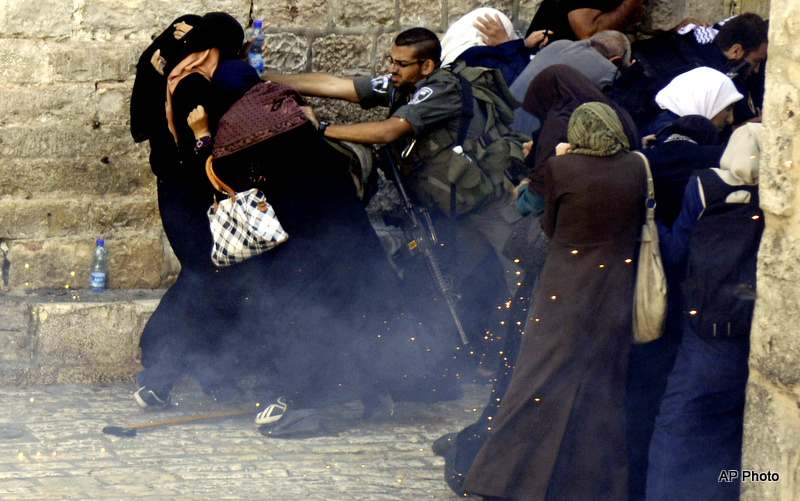 JERUSALEM — The press here has been talking recently of a “silent intifada”: the city has been convulsed by violence for months, but most of it happens at night, bottled up inside the Palestinian districts of occupied East Jerusalem.

By Thursday afternoon, though, after two shootings and a day of clashes, the situation in Jerusalem had become anything but quiet.

Thursday’s riots were sparked by the killing of Mutaz Hijazi, a Palestinian man accused of shooting a right-wing Jewish activist on Wednesday night. A pre-dawn raid by Israeli security forces to arrest him ended in gunfire, and for much of the day his neighborhood, Abu Tor, was blanketed in tear gas as security forces fought with local youths.

Just a week earlier, a Palestinian man drove his car into a crowd of passengers disembarking from the city’s light rail, killing two people, including an infant. Police killed him during a raid later that night.

Both attacks offer some insight into the grievances fueling the violence in the holy city. But while they may have escalated the violence in Jerusalem, the truth is that tensions have been rising for months.

Back in July, Palestinian teenager Mohammed Abu Khdeir was abducted and burned alive in an act of revenge for the killing of three Jewish Israelis in the occupied West Bank.

His murder set off a week of riots in his neighborhood, Shuafat, which ended with hundreds of people injured or jailed. Violence has continued at a lower level ever since: nightly clashes, buses and trains attacked with stones and firebombs. More than 700 people have been arrested in the past four months.

Palestinians point to a range of grievances, from the most recent Gaza war — in which 2,104 Palestinians died, including 1,462 civilians, along with 66 Israeli military personnel and six Israeli civilians — to ongoing home demolitions and arrests in the east.

One of the key issues is the status of the Temple Mount/Haram al-Sharif, the most hotly contested religious site in the city. It is the most sacred spot for Jews, who believe it to be the site of the biblical temple, and the third holiest place in Islam, since it houses Al-Aqsa mosque.

Glick worked with an organization called the Temple Mount Faithful, which campaigns for the construction of a new Jewish temple on the plateau.

Jews are currently banned from praying on the esplanade, to avoid confrontations, a status quo that many right-wing Israelis have long worked to change. Moshe Feiglin, a deputy speaker of the Knesset who witnessed the shooting, encouraged his followers to respond by showing up at the complex on Thursday morning. His announcement, and others by right-wing groups, prompted the authorities to shut the compound entirely.

Local activists said the closure was the first since the outbreak of the Second Intifada in 2000; Palestinian President Mahmoud Abbas called it a “declaration of war.”

A police spokesman said the complex will reopen on Friday, the Muslim holy day, but men under the age of 50 will be barred from attending prayers.

Tension has not been limited to the Old City. To the south, perched on top of a steep hill overlooking Abu Tor, lies the neighborhood of Silwan — a focal point for conflict in recent weeks.

Earlier this month dozens of Jewish settlers moved into nine buildings there. Economy Minister Naftali Bennett, from the national-religious Jewish Home party, praised the settlers for helping to ensure a “Jewish majority” in Silwan. In truth, the neighborhood is still overwhelmingly Palestinian.

Palestinian grievances in Jerusalem also have much deeper roots. Israel occupied the east of the city in 1967, and the vast majority of its residents elected not to become Israeli citizens. They are free to work and travel, but cannot vote in Knesset elections, and are subject to lose their status if they move out of the city.

Neighborhoods in the east receive less funding than the predominantly Jewish west, and municipal services are scarce. Building permits are expensive and difficult to obtain, and Palestinians who build illegally often have their homes destroyed.

Even the justice system, they say, treats Jews and Palestinians differently, a belief reinforced by the killings of the suspects in Silwan and Abu Tor.

In both cases, police spokesmen said the suspects were armed, and opened fire on security forces; in both cases, neighbors disputed the official account, and cited the peaceful arrest of Abu Khdeir’s killers as a counterexample.

“They would treat us much differently if it was a Jewish man who shot a Palestinian,” said Samir Natsheh, a resident of Abu Tor watching the clashes on Thursday.