Louisiana groups say they are fed up with environmental destruction wreaked by the oil industry and that the very least the state should allow a third-party assessment of what’s at stake before a proposed pipeline is allowed to be built.

They also want Louisiana to move to renewable energy, which is far safer and less toxic.

The groups cite the most recent oil spills – two in October in a three-day span, including a platform explosion that injured seven men and a pipeline leak that dumped 672,000 gallons of oil into the Gulf of Mexico.

Given the wretched history of the oil and gas industry in the state, they say it’s impossible for Gov. John Bel Edwards to promise the Bayou Bridge pipeline will be built right.

“We don’t for a second believe that the state of Louisiana is able to oversee the safe construction and operation of the Bayou Bridge Pipeline,” said Anne Rolfes of the Louisiana Bucket Brigade, an environmental advocacy group.” There are accidents every single week in the oil industry in this state, and there is no sign of that ending.”

Pointing to a record of repeated, continuing accidents and pipeline spills, Rolfes said: “We cannot properly manage our current pipelines and current infrastructure, and we have no business building more.”

The Bucket Brigade and four other nonprofits asked Gov. Edwards in an Oct. 17 letter to disclose the results of an environmental assessment of the proposed Bayou Bridge pipeline, which would stretch 162.5 miles through 11 parishes, from Lake Charles to St. James, and cut through the Atchafalaya Basin, a national heritage area with vast cypress-tupelo swamps and the largest remaining contiguous tract of coastal cypress trees in the country. At least 6.6 miles of the pipeline would crisscross its forested wetlands. In total, the pipeline would cross 700 waterways.

Energy Transfer Partners, in a joint venture with subsidiaries of Phillips 66 and Sunoco Logistics, is seeking federal and state approval to build the $670 million pipeline.

Supporters say it will generate tax revenue and will help the oil and gas industry and is the safest and most reliable way to transport crude oil.

Opponents say it would cause significant harm to the region’s crawfish industry, harm the wetlands it crosses, and threaten the drinking water supply. They call Energy Transfer Partner’s accident record proof that the company is “the worst ever.”

The groups have rallied at the governor’s mansion for the past five Tuesdays to urge Edwards to call for a more thorough environmental study of how the pipeline would affect water quality, flood risks and the environment along its path.

Rolfes said the responses to these concerns so far have been “cut-and-paste” answers that do not address the issues. Plus, she said, Edwards appears to be using the oil industry’s rationale that pipelines are safer than truck or rail, “line for line.” 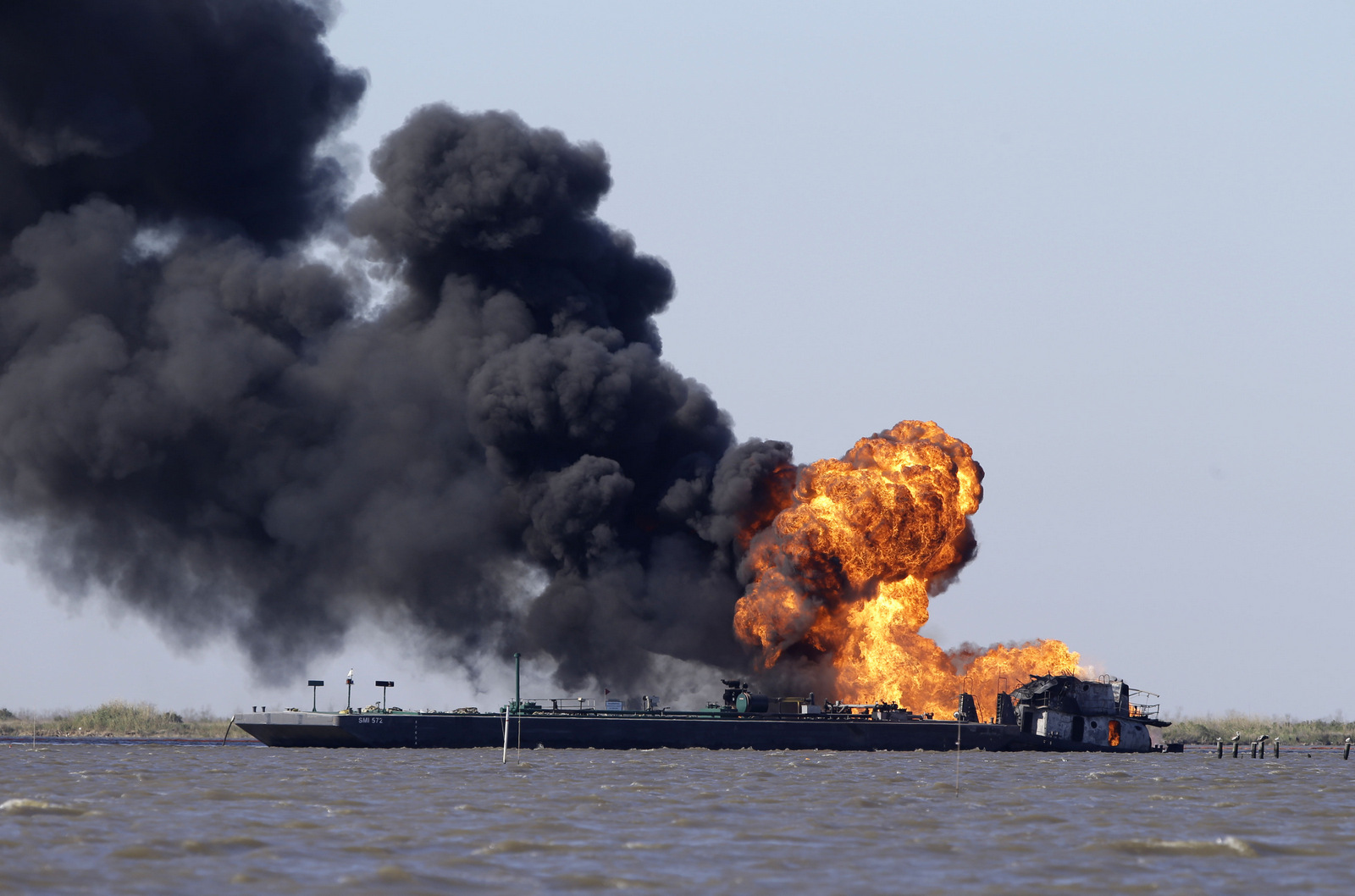 A fire burns after a tugboat and barge hit a gas pipeline in Perot Bay in Lafourche Parish, La., March 13, 2013. (AP/Gerald Herbert)

Edwards’ office did submit a comment to KATC3 TV: “There is no way to move significant quantities of crude that doesn’t involve some risks, but the governor believes that ultimately it’s much safer to use a pipeline to move the crude rather than trains or trucks, which are prone to having more accidents.”

Edwards announced his support for the on a radio show this summer.

“I will tell you that I support the pipeline,” he said, “but it’s because I know that the Louisiana Department of Natural Resources is going to make absolutely sure they abide by all the permit requirements, regulations and state laws. We’re not going to allow them to build this pipeline as they were built in decades previously. We’re going to move forward in a smart way, but I understand the controversy.”

Many scientific studies have documented the havoc that pipelines have wrought on the environment.

A 1972 study conducted by the pipeline industry itself concluded that every mile of pipeline causes the loss of 54 acres of land. Southeastern Louisiana University reported that 40 percent of U.S. wetlands are in Louisiana, and have suffered 90 percent of the nation’s total loss of coastal marshes.

And it’s not getting any better, the university reported: “As wetlands and barrier islands disappear, the wells, pipelines, ports and roads that make the energy industry possible will be more exposed to open water, wave action, storm surges and water traffic.”

It continues: “This includes thousands of miles of pipeline that will be increasingly vulnerable to rupture, resulting in oil spills and gas leaks. Over $103 billion in assets will be at risk and the transfer of petroleum products within the state and to the rest of the nation will be disrupted.”

The wetlands provide natural protection storms, within the marshes and on both sides of them. Numerous species of fish, including crawfish, depend on coastal wetlands for survival. When the wetlands go, the fish go with them.

Energy Transfer Partners is under investigation by the Federal Energy Regulation Commission for its construction of the Rover pipeline in Ohio and West Virginia. Numerous spills, false statements in permit applications and improper erosion protocols have been alleged. In one instance, 2 million gallons of drilling fluid were spilled in Ohio wetlands, blanketing more than 9 acres under a slurry of diesel fuel-contaminated bentonite, water and clay.

Vicki Granado, a spokeswoman for Energy Transfer Partners, said in an email: “Energy Transfer has always followed all federal, state and local rules and regulations governing our pipelines and related facilities, and will continue to do so.”

She said that 99.96 percent of the petroleum products transported through ETP pipelines have been delivered to their end destination.

Assuming all that 0.04 of oil was spilled, that amounts to 400 gallons spilled for every 1 million gallons delivered. Energy Transfer Partners says on its website, checked Wednesday morning, that “When completed, the Bayou Bridge Pipeline will be capable of transporting up to 480,000 barrels per day of light and heavy crude oil from different sources to the St. James crude oil hub, which is home to important refineries located in the Gulf Coast region.”

With 42 gallons per barrel of oil, that translates to 20 million gallons of oil pumped through the Bayou Bridge Pipeline. According to Energy Transfer’s own calculations, then, 8,000 gallons of oil can be expected to be spilled each day from that pipeline, at 0.04 percent spill ratio.

Supporters say the pipeline will generate tax revenue and will help the struggling oil and gas sector and that it is the safest and most reliable way to transport crude oil.

But environmentalists and crawfishers say the thousands of canals and pipelines built statewide for mineral extraction have altered the course of rivers and drainage, accelerating erosion, increasing flooding, and hastening the threat to Louisiana’s vanishing coastline and fishing industry. They say Louisiana should be looking instead toward renewable energy.

Already Texas, Iowa, Oklahoma, Kansas and the Dakotas generate the largest portion of their power from renewable sources, according to a CBS News Moneywatch report this summer. The report called renewables practically free, once the infrastructure is set up, and offer the best solution to energy production.

Louisiana’s oil and gas industry brings in more than $16 billion a year, and one-quarter of the nation’s energy supply depends on support facilities in southern Louisiana.

The oil and gas industry acknowledges that drilling contributes to at least 36 percent of Louisiana’s coastal erosion.

Costly plans to save what’s left of the coast are in the works, though underfunded, and no one knows where the insufficient funding will come from. All plans to save the coast involve improving drainage.

Scott Eustis, a wetlands specialist with the Gulf Restoration Network, said in October that the pipeline and Louisiana’s plans to save what’s left of its fragile coast are at cross purposes.

“To all of the politicians, the plan for the coast is in drainage, drainage, drainage,” Eustis said. “This pipeline project crosses 700 water bodies. That’s … a lot of places where [the Bayou Bridge] is going to trench right through a stream. How are we trying to spend money to try and increase culverts and then we are going to block 60 of them?”

Pipeline opponents, including Eustis, say the least Louisiana should demand is an environmental impact statement for the pipeline.

“It wasn’t until an environmental impact study was done by geologists at Port Fourchon in the 1970s that they realized, ‘Hey we’re losing our coast,’” Eustis said. Port Fourchon lies just east of the mouth of the Mississippi.

Cherri Foytin of the nonprofit BOLD Louisiana at the rally at the governor’s office Tuesday cited a Des Moines Register article, “Dakota Access Pipeline Wrecking Soil, Farmers Complain.” The Register reported that Energy Transfer Partners promised to put the soil back on farmers’ lots the way they found it after building the pipeline, but it has not, ruining crops and hurting the land.

“It shouldn’t be that one industry gets to kill another one,” Foytin said, “especially when one of them is where we get our food.”

Top photo | An oil facility is seen in the middle of canals dug for oil pipelines on the coast of Louisiana, Wednesday, July 28, 2010. (AP/Patrick Semansky)