Rise of The Far-Right

The rise of far-right extremism on the shadowy corners of the internet is a legitimate concern for those who value tolerance, peace and progress. Now a new study from the ADL’s Center for Extremism reports that radical white nationalist organizations are not content simply to congregate online; increasingly, they are spewing their hatred in traditional, highly visible public banners.

Over the last 10 months, anti-black, anti-immigrant and anti-Semitic banners have surfaced on highway overpasses and college campus rooftops across the country. The ADL counts at least 72 such banners since May 2017, an alarming rate of seven per month. Their messaging is decidedly political in nature, suggesting that the Trump administration’s backward policies, as well as the president’s constant stream of invective, have emboldened the most noxious segment of American society. “Groups associated with the alt right segment of the white supremacist movement are responsible for the bulk of this activism, and accounted for 73 percent of the incidents,” the ADL reveals.

A few groups in particular are to blame. Identity Evropa, a neo-Nazi group whose founder became famous after punching a 95-pound antifa protester in the face, “has used this tactic more than any other group, and is responsible for 28 incidents in 13 different states, or approximately 40 percent of the banner drops.” The group has hung banners reading, “Import the third world, become the third world,” and “You will not replace us,” among others. A banner hung outside Dearborn, Michigan warned drivers: “Danger, Sharia City Ahead.” 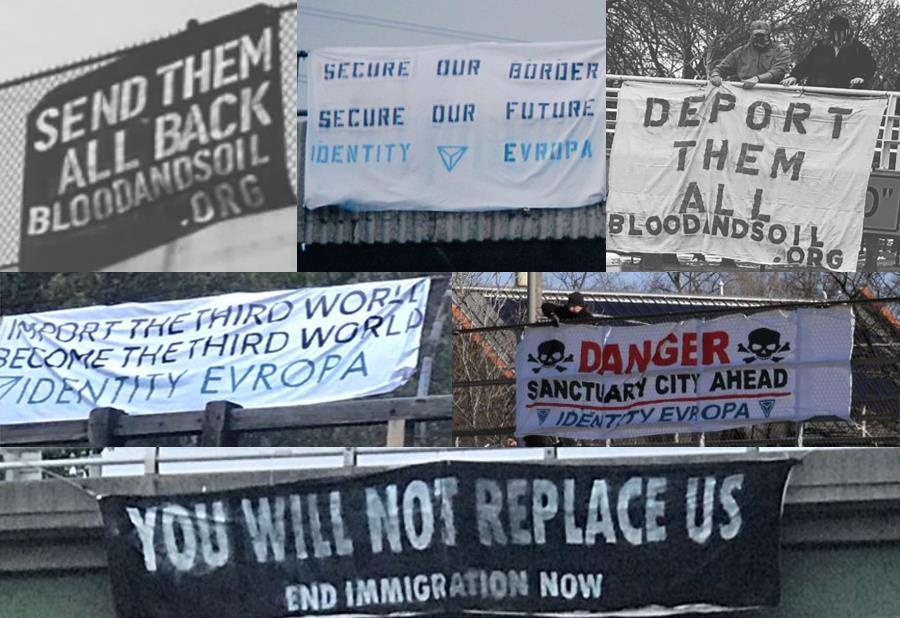 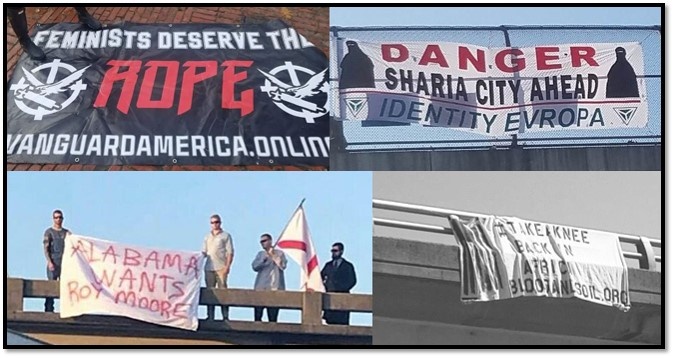 Other offenders include Patriot Front, a separate neo-Nazi group responsible for as much as 30 percent of the episodes detailed in the report. Its banners have claimed, “For race and nation” and “Americans are white. The rest must go.”

The ADL has documented signs from Los Angeles to Lakewood, New Jersey reading: “Jews Did 9-11,” “Deport them all,” “The Holocaust is a Lie,” “Feminists Deserve the Rope,” and at the height of NFL players’ protests, “Take a Knee Back in Africa.”

Top Photo | Members of the neo-Nazi National Socialist Movement hold flags as they salute and shout “Sieg Heil” during a rally in front of the Statehouse in Trenton, N.J. (Photo: Mel Evans/AP)

Liz Posner is a managing editor at AlterNet. Her work has appeared on Forbes.com, Bust, Bustle, Refinery29, and elsewhere.