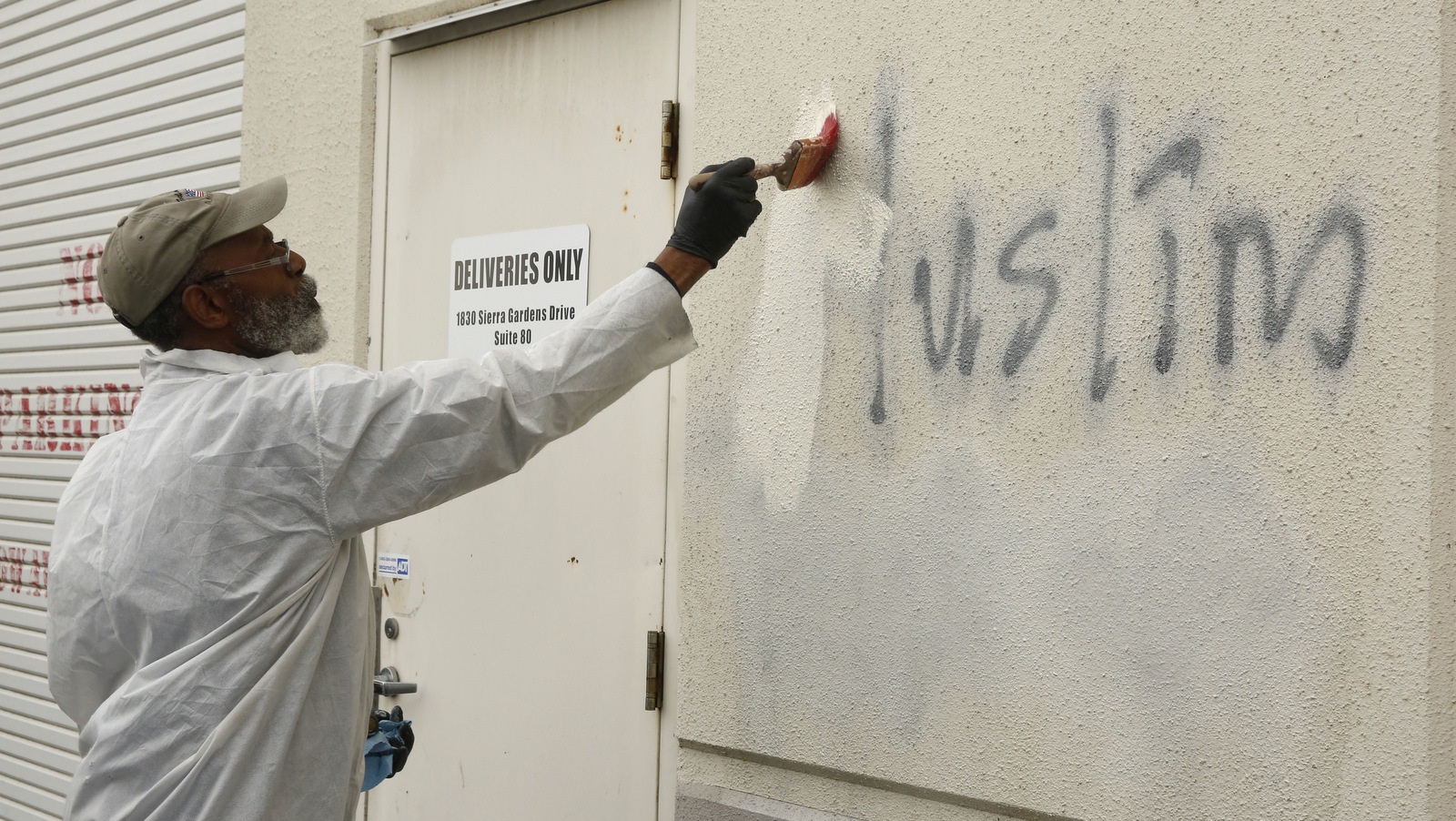 Willie Lawson paints over racist graffiti painted on the side of a mosque in Roseville, Calif. (AP/Rich Pedroncelli)

WASHINGTON (AP) — Most victims of hate crimes don’t report them to police, according to a new study that advocates say reinforces their fears that the Trump administration’s tough rhetoric and policies will make more people afraid to come forward.

More than half the 250,000 hate crimes that took place each year between 2004 and 2015 went unreported to law enforcement for a variety of reasons, according to a special report on the issue from the Bureau of Justice Statistics.

Hate crimes were most often not reported because they were handled some other way, the report said. But people also did not come forward because they didn’t feel it was important or that police would help, according to the report.

“I think this report shows the kind of fear that is going on in our communities,” said Patricia Montes, executive director of the Boston-based immigrant advocacy group Centro Presente. She and other advocates are concerned that Latino immigrants, in particular, may be reluctant to call police to report a hate crime for fear of being deported, particularly since the Trump administration is ramping up immigration enforcement across the country.

The report comes as the Justice Department officials gathered with advocacy groups and experts on Thursday to discuss hate crimes, including ways to better document them. Officials have long lamented a lack of solid data on the problem.

But Attorney General Jeff Sessions told the group his department remains committed to investigating and prosecuting such offenses as part of his larger priority of helping cities fight violence.”Hate crimes are violent crimes,” Sessions told the group. “No person should have to fear being violently attacked because of who they are, what they believe or how they worship.”

The report released Thursday is based on a survey of households and is one of several studies that aim to quantify hate crimes.

It cites racial bias as the top motivation, representing more than 48 percent of the cases between 2011 and 2015. Hate crimes motivated by ethnicity accounted for about 35 percent of those cases, and sexual orientation represented about 22 percent. Almost all of those surveyed said they felt they were experiencing a hate crime because of something the perpetrator said.

Hispanics were victimized at the highest rate, followed by blacks.

The new survey shows the limits of hate crime reporting, said Brian Levin, director of the Center for the Study of Hate and Extremism, California State University.

“Many victims don’t report hate crimes because of personal and institutional reasons,” Levin said. While some victims’ distrust of police keeps them from coming forward, Levin said, some LGBT victims may opt not to report a hate crime for fear of losing a job or being outed to family.

Members of the Muslim community are reluctant to come forward for fear of retaliation and because police don’t always classify their experiences as hate crimes, said Ibrahim Hooper, of the Council on American-Islamic Relations.

That’s because law enforcement officials still grappled with what constitutes a hate crime.

Levin said many large cities are claiming they had no hate crimes — calling into question the reliability of federal hate crimes data that are based on voluntary submissions from police departments. “We have Columbus, Ohio, reporting more hate crimes than the state of Florida,” he said.

The Trump administration must show “through action and its megaphone, its full and unflagging commitment to preventing hate-based violence and harassment that hurts our communities and destroys the fabric of our nation,” said Vanita Gupta, former head of the Civil Rights Division and president of The Leadership Conference on Civil and Human Rights.

Read a summary of the hate crimes report from the Bureau of Justice Statistics: