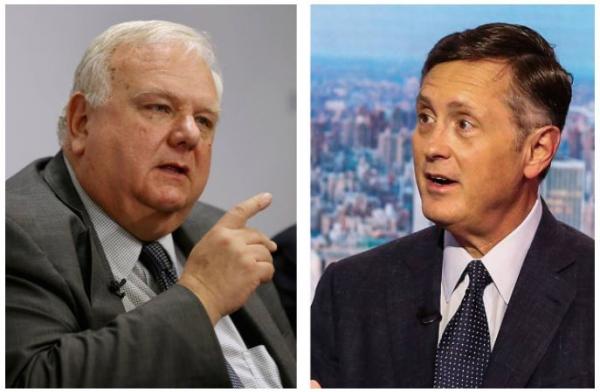 It seems President Donald Trump is confused about what “draining the swamp” really means .

After selecting Fed governor Jerome Powell to replace Janet Yellen as Fed Chair when her term expires in February, the Trump White House has now moved on to interviewing a series of candidates for the Vice Chair position.  As the Wall Street Journal notes this morning, two of the more likely candidates for that role are a pair of economists who served in senior positions in the George W. Bush administration.

The pair being considered by Trump consists of Richard Clarida, a managing director at money manager Pimco and a professor of economics and international affairs at Columbia University, and Lawrence Lindsey, who runs an economic-advisory firm in Washington.

In addition to his current roles, Clarida served as assistant secretary for economic policy at the Bush Treasury Department from 2002 to 2003. Lindsey was a top economic adviser to the Bush White House from 2001 to 2002 and served as a governor on the Fed’s board from 1991 to 1997.

As further background, here is Clarida’s bio from PIMCO:

Dr. Clarida is a managing director in the New York office and PIMCO’s global strategic advisor.In this capacity he leads PIMCO’s annual Secular Forum process and works closely with the Investment Committee to assess and analyze global monetary and fiscal policy trends. Since joining the firm in 2006, he has worked extensively with and served as a trusted adviser to the firm’s many central bank and sovereign wealth fund clients. Prior to joining PIMCO, he gained extensive experience in Washington as assistant Treasury secretary, in academia as chairman of the economics department at Columbia University, and in the financial markets at Credit Suisse and Grossman Asset Management. He has 19 years of investment experience and holds a Ph.D. in economics from Harvard University. He received his undergraduate degree with Bronze Tablet Honors from the University of Illinois.

And Lindsey’s bio from The Lindsey Group:

Larry Lindsey is President and Chief Executive Officer of The Lindsey Group. He has held leading positions in government, academia, and business. Prior to forming The Lindsey Group, he held the position of Assistant to the President and Director of the National Economic Council at the White House and was the chief economic adviser to candidate George W. Bush during the 2000 Presidential campaign.

Dr. Lindsey also served as a Governor of the Federal Reserve System from 1991 to 1997, asSpecial Assistant to the President for Domestic Economic Policy during the first Bush Administration, and as Senior Staff Economist for Tax Policy at the Council of Economic Advisers during President Reagan’s first term. Dr. Lindsey served five years on the Economics faculty of Harvard University and held the Arthur F. Burns Chair for Economic Research at the American Enterprise Institute. From 1997 until 2001 he was Managing Director of Economic Strategies, a global consulting firm.

In terms of policy preferences, Clarida has often spoken favorably in interviews about the accommodative monetary policies of Yellen. The Obama administration considered nominating Clarida to a vacant Fed seat in 2011, but he withdrew from consideration which ultimately resulted in Powell being chosen for the seat.

Lindsey, on the other hand, was one of the few to warn of a stock-market bubble in 1996 and said the Fed had an obligation to prevent the bubble from growing out of control…advice that someone should have given Janet Yellen about a year ago.

In terms of other candidates, the Trump administration is also considering Mohamed El-Erian, the former chief executive of Pimco and a former deputy director of the International Monetary Fund. El-Erian is also considered by many Fed watchers to be a potential candidate to lead the New York Fed, which will name a new president next year.

This article originally appeared on ZeroHedge .