Tracy Lee is a freelance international journalist and MintPress reporter that specializes in human interest stories. A former United Nations Correspondent for several years based for Xinhua News Agency, Lee covered the Security Council, General Assembly and all of its peacekeeping operations from UN Headquarters. She provided extensive reporting on a number of events, such as the Syrian civil war, Palestinian bid for UN membership and sanctions against Iran. Lee’s in depth human interest stories ranged from the aftermath of the 2010 Haiti earthquake to children caught in crossfire during the Libyan civil war. Recently in Rio de Janeiro, Brazil, Lee was on the ground covering the violent clashes between protesters and police during the massive protests that took off across the country. Other past stories which appeared on Huffington Post include the historic Pope Francis visit as well as a profile piece on an American who became a favela funk star in the favelas.

“The Fight Is Every Day:” Brazilians Rally Against Candidate’s Hate Speech

During Brazil’s presidential debates, one candidate attracted a level of attention any long-shot might long for, except that it came as the result of what many are calling hate speech hurled against an LGBT community already vulnerable to deadly violence and discrimination. 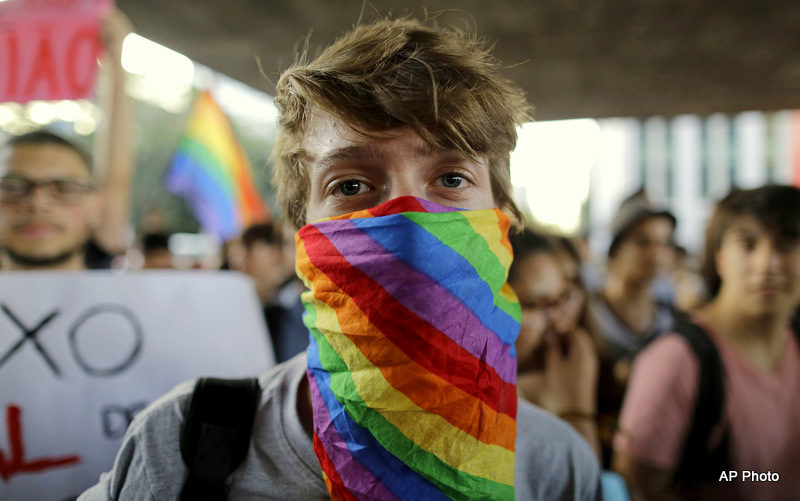 RIO DE JANEIRO --- In the historic city streets of Rio de Janeiro on Sept. 30, about 200 demonstrators and gay rights activists chanted "The fight is every day." Uniting in their individual struggles and frustrations, the crowd took a stance against recent anti-gay remarks made by Levy Fidelix, a former presidential hopeful. During a live

END_OF_DOCUMENT_TOKEN_TO_BE_REPLACED

In Rio de Janeiro, A Community Caught In The Crossfire

Since the end of the World Cup, shootouts between gangs and law enforcement have become the new normal for residents of a favela in Rio de Janeiro. RIO DE JANEIRO --- Francisca Thamires Nascimento Alves should be free to attend college classes, go to a corner store or luncheonette, and walk through her community with her friends. But because the 17-year-old lives among the series of sprawling hilltops that make up the cluster of favelas of Complexo do Alemão (which translates to German

END_OF_DOCUMENT_TOKEN_TO_BE_REPLACED

Protests And Frustrations On The Sidelines Of The World Cup

The World Cup wrapped up on Sunday. While many were surprised with Brazil’s success as a host, others, just several blocks from the field, were less enthused. RIO DE JANEIRO --- Felipe Francisco, a 21-year-old medical student and activist, was cautious about Sunday’s World Cup final. Before the Rio de Janeiro native left home, he dressed in a white medical coat and hung a stethoscope around his neck. A big black backpack stuffed with emergency equipment tugged at his shoulders. For every game played

END_OF_DOCUMENT_TOKEN_TO_BE_REPLACED

Brazilians usually welcome the World Cup with great fanfare and festivity. But now that the tournament’s on their home turf, it’s also competing with social issues off the field. RIO DE JANEIRO, Brazil --- Near the entrance to Rocinha, one of Rio de Janeiro’s largest slums, or favelas, July Anjinha, outfitted in a yellow and green national shirt, blends in with the T-shirts hanging in the simple stands set up where she works. Small banners wave softly behind her as mototaxis roar up and down the endless spiral of dirt roads

END_OF_DOCUMENT_TOKEN_TO_BE_REPLACED

Matching Up To The World Cup, Protests And Strikes Hit Brazil

The eyes of the world are turning to Brazil, a country gearing up to host the World Cup and grapple with protesters hoping to draw attention to their causes. RIO DE JANEIRO -- Physical education teacher Marcus Vinicius Menzes, 31, doesn’t even have enough soccer balls for all of his students at E.M. Dora Papaleo Elementary School in Nova Iguaçu, a poor suburb of Rio de Janeiro. “What is the goal of [the World Cup]?” said Menzes. “Where I play games with my kids… there is no gym roof or floor. It’s

END_OF_DOCUMENT_TOKEN_TO_BE_REPLACED

Fighting Cyberbullying With A Mobile App

Technology’s nature as an ever-evolving landscape and its growing presence in the lives of young people means fighting cyberbullying is both more difficult and more critical than ever. NEW YORK --- When he learned that a teenage girl took her own life because of cyberbullying, Todd Schobel knew he needed to join the fight to prevent future tragedies from unfolding. In just a few days, he came up with an app to empower young people to stand up against bullying.  “[I believe] kids are good. I don’t think there’s a culture of evil

END_OF_DOCUMENT_TOKEN_TO_BE_REPLACED

The Search For A Home: A 21-year-old’s Journey To Escape Homelessness

Covenant House is a nonprofit transitional living center that can be the saving grace for some young people. Troy Johnson is just one of their success stories.

NEW YORK --- 2013 was a dark time for 21-year-old Troy Johnson. After being kicked out of both of his parents’ homes, Johnson spent a year living on the streets of New Jersey. In February, however, everything changed. “I actually thought I was going to be homeless again, you know, sleeping on the street, because I had before,” the