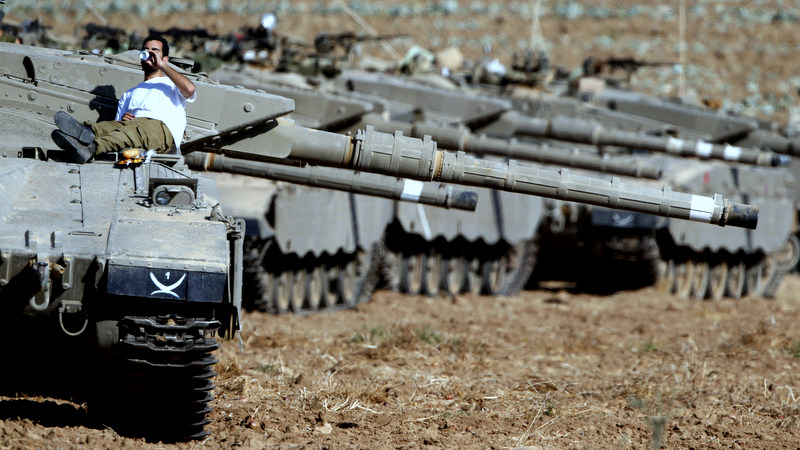 An Israeli soldier drinks a soda as he rests on a tank at a staging area on the Israel-Gaza border, Thursday, July 10, 2014. (AP/Lefteris Pitarakis)

Israel continues to escalate airstrikes against the Gaza Strip today, with officials reporting 750 strikes in the last 48 hours, and the attacks leaving at least 81 killed, and hundreds others wounded.

The split between Hamas fighters and civilians remains unclear in the chaos of the Gaza attacks, but at least 12 children have been confirmed killed on Wednesday. Most of the missiles hit residential areas, destroying over 50 homes and damaging 1,700 others.

That’s just the beginning, according to Israeli officials, who bragged about hitting more targets in 48 hours than they did in the whole week-long November 2012 clash.

Outgoing President Shimon Peres confirmed an imminent ground invasion, as Israel continues to mass troops and tanks along the Gaza border, saying it will “happen quite soon,” and that its the “logical conclusion” to the current conflict with Hamas.

Arab nations are pushing for an emergency UN Security Council meeting to try to secure a ceasefire, though with the United States praising the Israeli onslaught, it seems likely that any UN measures to stop the fighting will come only after Israel has tired itself out pounding the tiny strip.

This article was published by AntiWar