The threat of cyberterrorism has competed for center stage in American politics with fears of “Russian hackers” disrupting everything from elections to electrical grids. And yet as US policymakers wield threats of cyberterrorism to promote a long and growing list of countermeasures and pretexts for expanding its conflict with Moscow, it is simultaneously promoting very real cyberterrorism globally.

Worst of all, it does so under the guise of “activism.”

In it, readers may have expected a detailed description of how independent local activists were using information technology to inform the public, communicate with policymakers and organize themselves more efficiently.

Instead, readers would find a list of US-funded fronts posing as “non-governmental organizations” (NGOs) engaged in subversion, including attacks carried out against Thai government websites aimed at crippling them, the dumping of private information of ordinary citizens online and coercing policymakers into adopting their foreign-funded and -directed agenda.

The paper would claim (our emphasis):

The most innovative countermeasure was a series of Distributed Denial of Service (DDoS) attacks: an anonymous group, Thailand F5 Cyber Army, declared a cyberwar on the Thai government by encouraging netizens to visit listed official websites and continuously press F5 on their keyboards to refresh the pages. The goal was to overwhelm web servers and cause a temporary collapse of the websites of the Ministry of Defense, Ministry of Information and Communication Technology, Government House of Thailand, National Legislative Assembly, and Internal Security Operations Command. The group disseminated detailed instructions on the operation to its anonymous activists. It then demanded that the junta cancel its Single Gateway proposal.

Most of the attacks were successful. Activists wanted to demonstrate the government’s technological ineptitude and its lack of capacity to manage the Single Gateway. Arthit Suriyawongkul, coordinator of the Thai Netizen Network, described the campaign as virtual civil disobedience—an online version of the nonviolent resistance practiced by civil rights groups in the United States.

In another case, an activist group called Anonymous launched a #BoycottThailand campaign on Twitter and reportedly hacked government websites, snatched confidential information from official databases, and shared it online.

The Thai Netizen Network is funded by the US State Department via the National Endowment for Democracy (NED) subsidiary, Freedom House, as well as convicted financial criminal George Soros’ Open Society and a number of other foreign governments and corporate-funded foundations. 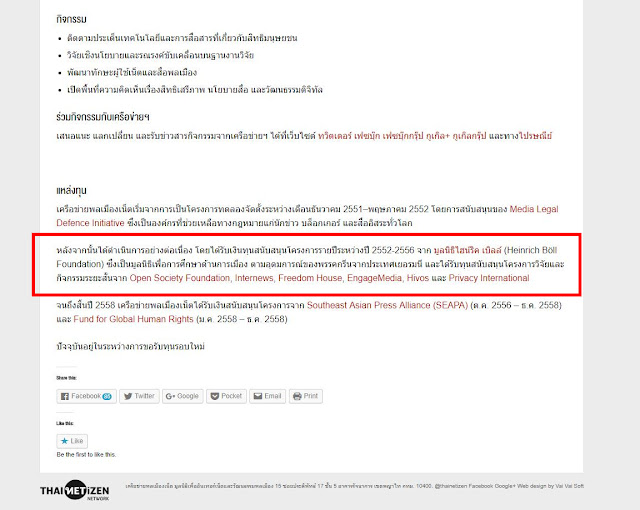 The role of a foreign-funded front coordinating efforts to undermine Thailand’s national security, including promoting cyberterrorism as “civil disobedience,” carries with it many implications. That the US is the foreign state promoting these activities in Thailand, undermines its own efforts to define and combat cyberterrorism back home.

Cyberterrorism is described on the United States Federal Bureau of Investigation’s (FBI) website as:

…the use of computer network tools to shut down critical national infrastructures (e.g., energy, transportation, government operations) or to coerce or intimidate a government or civilian population.

Attacking government websites millions of people across Thailand depend on for information and services while pilfering the personal information of thousands of ordinary citizens clearly fits the definition of not only cyberterrorism because of the political motivations involved, but also malicious criminality in general.

Unlike alleged Russian hacks which divulged emails detailing impropriety among American politicians, the information pilfered by US-backed hackers in Thailand included the personal information of  millions of ordinary citizens using government services as part of their daily lives.

Bangkok Post would fill in the missing information intentionally omitted from the Carnegie Endowment paper, reporting that:

Files posted by Anonymous and examined by the Bangkok Post appear to be from the court system, as the Anonymous posters claimed.

By dumping this information online, US-backed hackers targeted ordinary citizens, jeopardizing their privacy and exposing them to criminal elements the world over involved in identity theft.

US Cyberterrorism is not “Activism”

The Carnegie Endowment paper itself was drafted by Janjira Sombatpoonsiri, assistant professor of political science at Thammasat University, Thailand. She is also cited as a member of the Carnegie Endowment’s Civic Activism Network. Not only is she an active, contributing member of Thailand’s foreign-backed opposition, she is admittedly involved in a foreign think-tank funded by foreign corporate interests.

The Carnegie Endowment includes among its sponsors in its 2016 annual report; the US government, pharmaceutical giants including Gilead, petrochemical monopolies including Chevron, British Petroleum, and Shell defense contractors including Lockheed Martin and several automakers including Ford. Image: US-funded Thai Netizen participates in a likewise foreign funded Amnesty International protest. Thai Netizen and the agenda is promotes is neither Thai nor activism. It is foreign interference, and now, constitutes aiding and abetting cyberterrorism.

Like many other episodes of extraterritorial political interference up to and including military intervention, America’s meddling in Thailand is done on behalf of corporate interests seeking to expand their respective and collective hegemony both regionally in Asia vis-a-vis Beijing, and globally. This interference is done under the cover of rights advocacy, both by the think tanks and foundations funding it and those in Thailand receiving foreign cash.

The US use of cyberterrorism in Thailand and beyond should come as no surprise. It augments already ongoing efforts by US-backed opposition in Thailand to destabilize and upend Thailand’s political order which has included armed terrorism.

Most recently, a string of bombings plagued Bangkok, including one targeting a hospital. At various junctures during Thailand’s political conflict, foreign-backed opposition has brought militants into the streets. In 2010, nearly 100 would die over the course of several weeks, culminating in citywide arson leaving areas of Thailand’s capital, Bangkok, resembling a war zone.

To see US-sponsored authors attempting to promote cyberterrorism as “activism” in Thailand also comes as no surprise. When Thailand’s opposition carries out armed terrorism, US-sponsored media and policy think tanks often attempt to spin it as well. Other forms of more traditional subversion are also regularly defended by the US and its myriad fronts posing as rights advocates as “activism.”

Understanding that it is not “activism,” but by America’s own very definition, cyberterrorism, helps disarm this malicious campaign posing as “civil disobedience” and “activism,” and allows nations like Thailand to defend themselves through enhanced technological security measure as well as legislation.