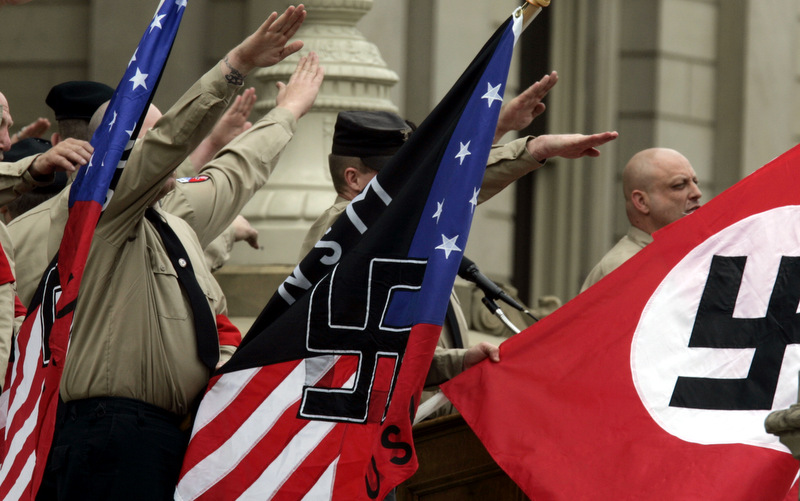 The Rebirth Of American Nazism

MintPress takes a look at Nazis in America, asking, “Who are they?” and “What do they want?”

Members of the National Socialist Movement rally at the state Capitol in Lansing, Mich. for a rally. (AP Photo/Carlos Osorio)

Few words in the English language evoke as much of an emotional reaction as the term “Nazi,” or the image of a swastika. Despite the negative connotations and association with some of the most blatant acts of human rights violations committed in the 20th Century, those who identify with the political party Adolf Hitler brought to the forefront during World War II are still alive and well, even in the United States.

The U.S. version of the Nazi party, known as the American Nazi Party, was formed in 1959 by U.S. Navy Commander George Lincoln Rockwell, who led the party until he was shot and killed in 1967 by a sniper in Virginia.

The ANP is now led by Rocky J. Suhayda, who joined the party in 1967, at the age of 16. It is based out of Detroit, believed to be Suhayda’s hometown.

Americans who identify as a Neo-Nazi or as a post-WWII member of the National Socialist party, say they only use the politically-charged term “Nazi” to describe themselves because most Americans do not understand what a National Socialist is and would likely confuse the term with “some kind of Marxist ideology.”

While most Americans believe the goal for all Nazis is to eradicate all non-Aryans, or anyone who is not 100 percent of complete white-European descent, the ANP says its primary goal is to attain the Fourteen Words: “We must secure the existence of our people and a future for White children.”

According to the American Nazi Party’s website, National Socialists “are certainly NOT ‘supremacists,’ rather we are SEPERATISTS (sic) – we believe that RACIAL SEPERATION (sic) is best for all concerned. White and non-White alike.”

In other words, “IF there could be ONE ALL-WHITE nation on planet earth, where we Racialists could happily live – AWAY – from ‘others,’ whom we would prefer not to co-exist beside…, we would move there,” the group says.

ANP’s second goal “is to achieve Social Justice for the White Working Class,” adding that it is not one of their goals to “‘exterminate’ each and every jewish person in existence.

“What we ARE out to destroy – is, the JEWISH MONIED ‘ELITES’ POWERHOLD in America, where for example ISRAEL’S best interests are put BEFORE the best interests of America and its citizens,” ANP’s website says.

“The ‘small jew,’ who works for a living like everyone else, and has no ‘say’ over the current situation, than you or I – has nothing to fear from National Socialism. Neither does ANY non-Aryan. (National Socialism) stands FOR separate, self-determination and autonomy for ALL the peoples of the world. Only those who would do harm to the Aryan Folk, are our enemies.”

MintPress asked Suhayda if he or any other member of the ANP was available for an interview to discuss the party’s goals and recruiting efforts, as well as address any misconceptions. He initially agreed to answer our questions instead of directing us to the party’s website, which is how the organization usually handles media requests. However, in the end, Suhayda opted not to respond to our questions, saying the ANP doesn’t want attention from “the enemy’s media.”

The NSM’s 40-year-old leader Jeff Schoep has also been criticized by the ANP and other white-power organizations because the Minnesota native, who now lives in Detroit, reportedly married a woman of Arab descent, and has a daughter who is half-black from a previous marriage.

Understanding the attraction to the Nazi Party

To understand what may attract Americans to join the ANP, MintPress spoke to Professor David Steele from the University of St. Thomas in St. Paul, Minn. Steele, who teaches a class on the history of Nazi Germany, said that some people are attracted to the movement simply to shock others, while others are genuinely enticed by part or all of the movement.

“People who are socially or economically alienated from mainstream society are especially prone to turning towards extremist parties on both ends of the spectrum,” Steele said. “In the case of National Socialism, it tends to appeal to people who are frightened of modern economic, social, or political trends and see the movement as a bulwark against what they see as the decline of traditional society.

“In the case of Germany in the 1920s and 1930s, many people did not have faith in the institutions (and messiness) of democracy or the economic stability of the New Germany and feared modern art and music, capitalism, speakeasies, Communism, and other modern challenges to what they perceived as the traditional order.

“In our contemporary world, the rise of gay rights, civil rights, the increasingly prominent role played by people of color in positions of influence, the evolution of the American family, and other such developments are all perceived as a threat to people who are educationally, socially, or economically on the margins of our society,” Steele said. “As a result, it is comforting to band together, lash out at the frightening modern world, and sharply define ‘us’ against ‘them,’ which brings into the mix the acute racism of National Socialists.

“We saw that in Nazi Germany as they defined Jews and the Roma as the ‘other,’ and we see it in America as they define African-Americans, Hispanics, gays, and others as the ‘other.’ It is for these reasons that National Socialism seems to become more prominent at times of great economic and social change as we are witnessing now.

“In Europe, we are seeing the rise of neo-Nazi parties in response to the influx of foreign peoples made possible by the European Union – people who are perceived as racially or ethnically inferior and who are taking scarce jobs and apartments from the traditional majority population.”

Regardless of whether there is a justified reason for any person to want to join the ANP or NSM, Heidi Budaj, regional director of the Anti-Defamation League, said the group’s existence is  “wrong on every level.”

“First of all,” Budaj said, “America is based on immigrants. This is a country of immigrants. (Neo-Nazi groups) would like other races to go away….Many of them believe that American citizenship should only be afforded to white people — white people excluding homosexuals non-Christians.”

Budaj also pointed out the dangers in Nazi-like hate speech. “There are actually very few steps between embracing that ideology, acting on that ideology, turning to violence with that ideology… It can actually in the end lead to genocide.”

But the ANP maintains that it has “many other issues of concern” besides living in a nation that solely consists of white people, including protecting the environment, creating a national health care system and a free education system.

During an ANP radio program on Feb. 14, Suhayda said he assumes most of the men and women who have joined the ANP chose to do so because they are not happy with the current state of America. “If that is the case,” he said, “we have to ask ourselves, what can we do to make positive change.”

“(National Socialists) believe that the STATE should be in SERVICE to the PEOPLE – not, as it is unfortunately done today – where the people are nothing more than WAGE-SLAVES, TAX-COWS, and CANNON-FODDAR (sic) to that 3 percent of the population that control 85 percent of America’s wealth,” the group said.

“This current, corrupt Judeo-Capitalist system is nothing more than a plutocracy of the rich…”

The ANP also describes itself as an advocate of free speech, but Suhayda wrote on the website that the ANP’s version of free speech is limited.

“As an example, in a (National Socialist) America, we would no longer allow naked, gyrating homosexuals to assault the White populace through disgusting ‘Gay Parades’ – where they flaunt and perform degeneracy, and lack of decency – simply because they can ‘get away with it,’” he said.

“Nor would a (National Socialist) America allow the proliferation of ‘pornography’ as ‘art’ and/or ‘entertainment,’ such as this present day kosher society does. Nor would (National Socialists) allow degenerate ideas like race-mixing to be promoted in an Aryan society.”

However, he says, it would be fine for someone to publicly declare that “space aliens are coming to probe them.”

In a radio program, Suhayda and two other unnamed members of the ANP said it’s a “common misconception National Socialism is just about aryanism,” before explaining that just like other political parties, the ANP cannot run a government based on a single issue — the party needs to address “all issues a culture or society faces.”

Hoping to slowly implement the ANP platform into the U.S. government and American way of life, Suhayda encouraged ANP members to get involved in politics on a local level, and encouraged members to run for local city council and even positions such as water district commissioner.

“Running for local office is easy,” Suhayda said, explaining that this is because many Americans shy away from hard work. He did, however, encourage members not to disclose they were a member of the ANP during election season.

The goal of obtaining lower level political positions, according to the ANP, is to build a base of supporters, and then run for office on a state and eventually federal level. On its website, the ANP says it has chosen to run for office instead of holding “senseless ‘demonstrations’” because the American public has been influenced by the media and wealthy to believe the group does nothing to benefit Americans.