On Nov. 29, President Trump retweeted a series of videos that purported to depict violence committed by Muslims. They had originated from the account of a far-right British ultranationalist who had been convicted for harassing a Muslim. The backlash was swift, with British Prime Minister Theresa May saying “the President is wrong to have done this.”

But Trump’s retweeting of controversial (sometimes outright false) content is part of a pattern.

For example, during the 2016 campaign, George Stephanopoulos asked Donald Trump about his retweet of a follower who insisted that both Marco Rubio and Ted Cruz were ineligible for the presidency.

Trump dismissed Stephanopoulos’ question with “it was a retweet” – as if to say that retweeting someone else’s claim meant that he wasn’t responsible for the content.

"@ResisTyr: Mr.Trump…BOTH Cruz AND Rubio are ineligible to be POTUS! It's a SLAM DUNK CASE!! Check it! https://t.co/NjqWP0pP6X"

It’s a response that can be reduced to I’m not saying it, I’m just saying it.

But it’s becoming increasingly clear that what sets Trump apart is his reliance upon paralipsis, a device that enables him to publicly say things that he can later disavow – without ever having to take responsibility for his words. 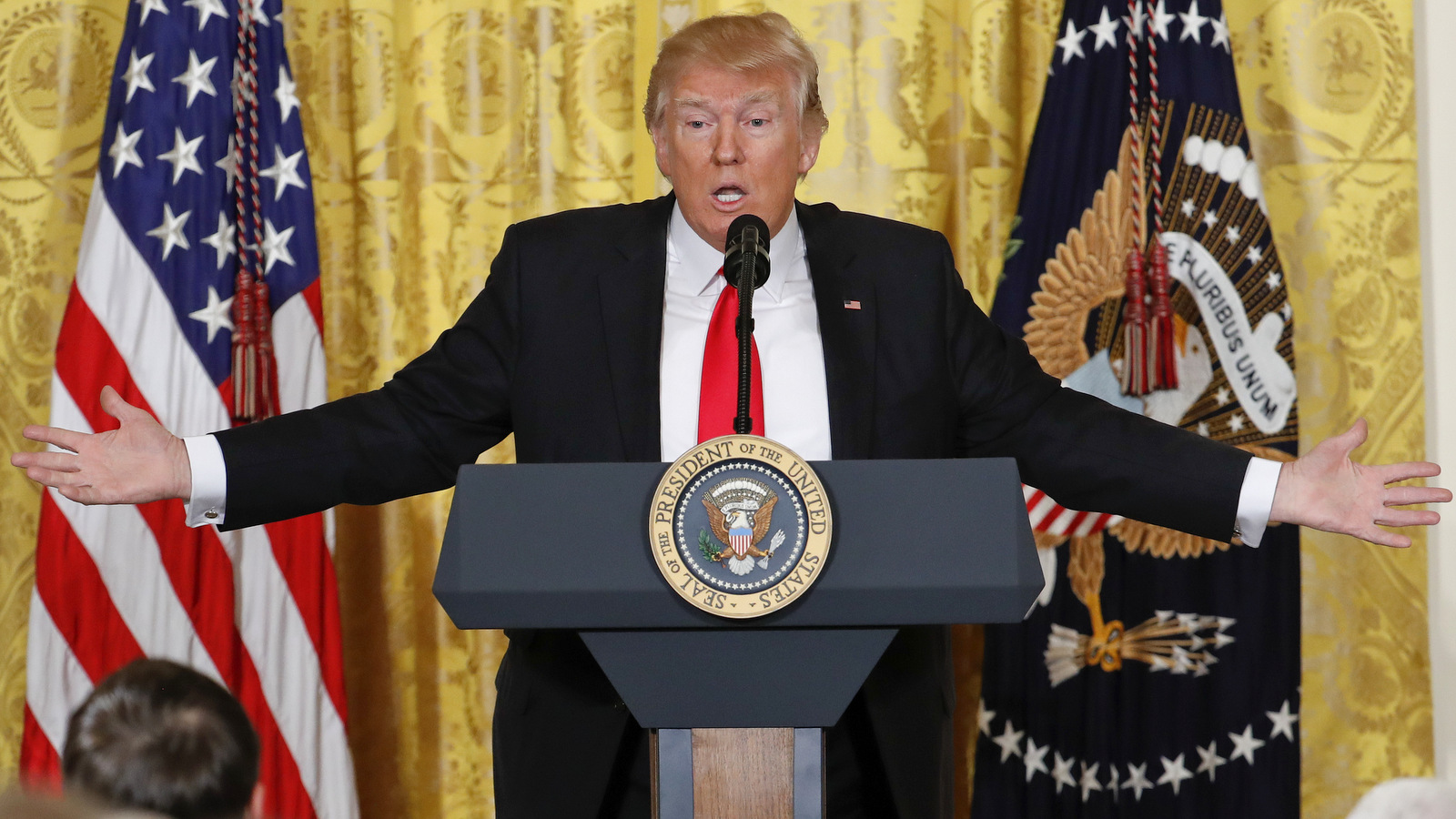 President Donald Trump speaks during a news conference in the East Room of the White House in Washington, Thursday, Feb. 16, 2017. (AP/Pablo Martinez Monsivais)

The art of rhetoric – or persuasive communication – can include any number of forms: speeches, essays, tweets, images, films and more.

Paralipsis (para, “side” and leipein, “to leave”) is a Greek term that translates to “leave to the side.” It’s thought to be an ironic way for a speaker to say two things at once.

For example, say you wanted to imply that your coworker takes too many coffee breaks without actually accusing him wasting time at work. You might say something like, “I’m not saying that he drinks more coffee than anyone else in the office, but every time I go to the break room, he’s in there.” You might also shrug and make a “something seems kind of off” facial expression.

Paralipsis is a powerful rhetorical device because it can also allow someone to make a false accusation – or spread a false rumor – while skirting consequences.

And Trump has become a master at wielding this tool.

For example, after he was widely condemned for retweeting a graphic of homicide data delineated by race, FactCheck.org found that “almost every figure in the graphic is wrong.” His response on the Bill O’Reilly Show was:

Bill, I didn’t tweet, I retweeted somebody that was supposedly an expert, and it was also a radio show…am I gonna check every statistic? …All it was is a retweet. And it wasn’t from me. It came out of a radio show, and other places…This was a retweet. And it comes from sources that are very credible, what can I tell you?

In other words: I’m not saying, I’m just saying.

In January 2016, Trump retweeted a photoshopped image of Jeb Bush from a user with the handle WhiteGenocideTM. In response to the backlash he received for retweeting a white supremacist, Trump simply shrugged: “I don’t know about retweeting. You retweet somebody and they turn out to be white supremacists. I know nothing about these groups that are supporting me.”

Likewise, he blamed a faulty earpiece for his unwillingness to disavow David Duke and the KKK in a CNN interview:

And when Gawker tricked Trump into retweeting a quote from Benito Mussolini during the campaign, his response was “What difference does it make whether it’s Mussolini or somebody else? It’s certainly a very interesting quote.” Trump protester Bryan Sanders, center left, is punched by a Trump supporter as he is escorted out of Republican presidential candidate Donald Trump’s rally at the Tucson Arena in downtown Tucson, Ariz., Saturday, March 19, 2016.

However, there’s danger in circulating accusations and rumors, even if the purpose is to “start dialogue.” Research shows that once an accusation or a rumor begins to circulate, it’s very difficult to retract. Often, a retraction or clarification doesn’t receive as much attention as the initial accusation. Meanwhile, the mere act of retracting misinformation can reaffirm the deceptive assertions as facts, even after the clarification.

So what does it mean when a political figure gains a devoted following and rises to prominence – yet consistently avoids taking responsibility for the content of his public messages?

Political theorists, rhetoricians and historians have grappled with this exact problem since the rise of the “demagogue” in Athens in 429 B.C., when Pericles’ death created a vacuum for “unofficial” leaders of the people to rise to power.

The danger, according to political scientist Ernest Barker, was that “such a leader – having no official executive position – could exercise initiative and determine policy without incurring political responsibility, since it was not his duty to execute the policy which he had induced the assembly to accept.”

In the Greek context, Barker described the danger of demagogues who weren’t tasked with implementing the policies for which they advocated. In our current political context, Trump can argue that he can’t be held accountable because he wasn’t the one who originally posted the tweet. He can shrug and claim that he’s simply giving a voice to an idea.

In both cases, the defining feature of demagogues is their refusal to accept responsibility for their actions.

To use the President’s brand of paralipsis: I’m not saying that Trump’s a hypocrite and a demagogue. I’m just saying that he doesn’t exactly follow his own advice.

This is an updated version of an article first published on March 8, 2016

Jennifer Mercieca is an Associate Professor of Communication and Director of the Aggie Agora, Texas A&M University. She a historian of American political discourse, especially discourses about citizenship, democracy, and the presidency. Her scholarship combines American history with rhetorical and political theory in an effort to understand democratic practices. She argues that current views of citizenship rely upon the tragic and ironic views, which do not enable citizens to act to control their government.