With union membership at a 97-year low, the labor organization may seek new partnerships — and ditch the Democratic Party. 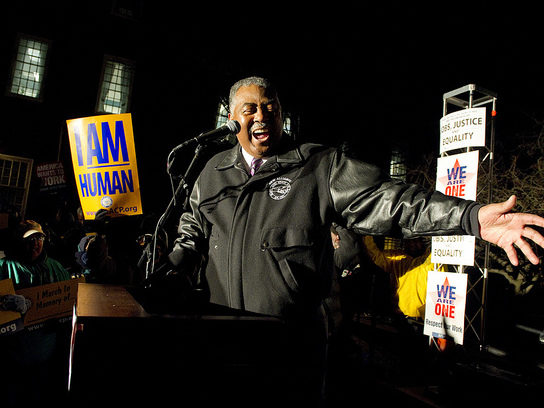 The AFL-CIO, an umbrella labor organization representing 57 unions and 12 million workers across the U.S. opened its annual convention in Los Angeles, Calif. this week. The Los Angeles Times reports that the 5,000

END_OF_DOCUMENT_TOKEN_TO_BE_REPLACED The battle over Michigan’s right-to-work laws rages on as the state’s 629,000 union workers continue the fight to repeal legislation they believe undermines collective bargaining rights. The Lansing State Journal reports that the latest showdown pits

END_OF_DOCUMENT_TOKEN_TO_BE_REPLACED

It’s highly likely he will seek concessions from the city’s labor unions. The emergency manager law gives him authority over collective bargaining.

DETROIT — Detroit is broke and faces a bleak future given the precarious financial path it's on, according to a new report out by the city's state-appointed emergency manager. The report was released late Sunday by bankruptcy attorney Kevyn Orr and is his first on Detroit's finances since officially taking the job in March. Under state law,