After an announcement that the UK would back move to ban controversial neonicotinoids pesticides, attention has turned to Bayer and Syngenta.

The pesticide giants also encouraged the academics to study their own research on bees, which showed no harm from their products; only to be rebuffed by researchers. 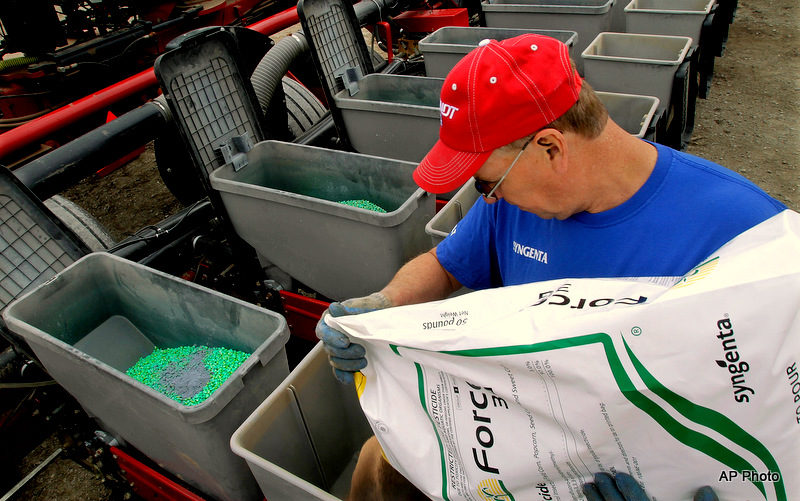 Bayer and Syngenta repeatedly asked scientists to give them raw data on a major new study which found that neonicotinoid pesticides cause harm to bees before it was published, according to emails obtained under Freedom of Information (FOI) rules. Both companies cited their position as co-funders to try to get information from researchers at the

END_OF_DOCUMENT_TOKEN_TO_BE_REPLACED

‘Syngenta and Bayer have a substantial amount of influence in the debate,’ said one neurobiology researcher in response to a Greenpeace analysis of corporate corruption in pesticide research. MINNEAPOLIS --- Pesticide manufacturers have spent millions influencing researchers who are investigating the role of neonicotinoids, a nicotine-like chemical found in many major pesticides, in bee die-offs, according to a recent analysis by Greenpeace. The analysis arrives just weeks after scientists released the results of a long-term study

END_OF_DOCUMENT_TOKEN_TO_BE_REPLACED

Farmers, beekeepers, and food advocates met with officials from the EPA to urge an immediate ban on the widely-used pesticides linked with Colony Collapse Disorder. Between 1947 and 2005, bee colony numbers declined by 40%, from 5.9 million to 2.4 million. Despite scientists’ efforts to understand – or stop – the phenomena, the trend has only increased in recent decades. Now, it’s projected that if Colony Collapse Disorder continues at the current rate, populations of managed honey bees will

END_OF_DOCUMENT_TOKEN_TO_BE_REPLACED

The court ruled that “neither logic nor precedent” support the EPA’s decision to approve the Dow pesticide when the agency’s own scientists were calling for more research. SAN FRANCISCO --- A federal appeals court made the unusual decision last week to overturn Environmental Protection Agency approval of a pesticide that many believe is contributing to the widespread death of bees. In their Sept. 10 decision, the 9th Circuit

END_OF_DOCUMENT_TOKEN_TO_BE_REPLACED

Farmers and the province have agreed to rules for reduction that begins July 1, while the manufacturer maintains the controversial insecticide is safe. Ontario is moving to take the sting out of pesticides that are killing bees. On July 1, the province will become the first jurisdiction in North America to begin reducing the number of acres planted with

END_OF_DOCUMENT_TOKEN_TO_BE_REPLACED

“Pesticide sellers have worked hard to convince American farmers that they need to use these toxic seed treatments. Now that we know that these treatments don’t even help farmers, EPA must take action to ban them,” one environmental watchdog tells MintPress. WASHINGTON --- Environmentalists and those pushing for the weakened use of chemicals in agriculture say they are bolstered by a new study from the U.S. government that strongly questions the efficacy of one of the most common pesticides used on soybeans. The class of pesticides under investigation by the Environmental Protection