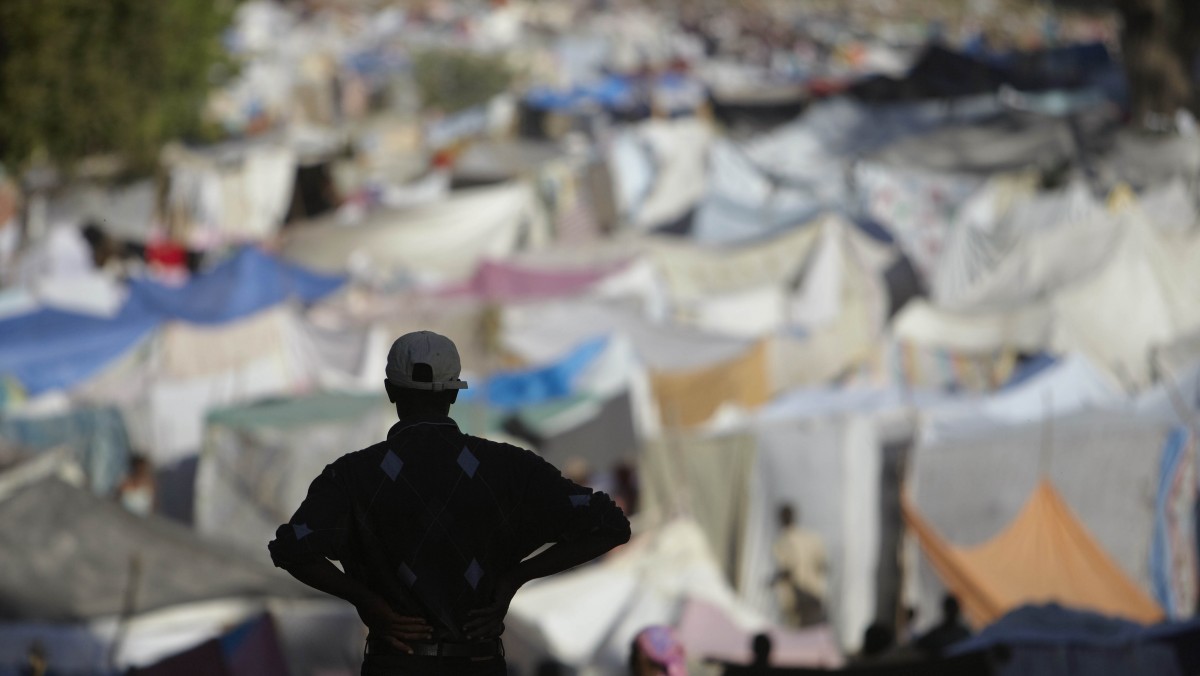 A man looks out over makeshift tents at a refugee camp. (AP Photo/Gregory Bull)

Three out of every four Africans residing in Sub-Saharan cities live in an informal settlement. Inside these meagerly-furnished corrugated tin homes are people who have jobs, pay taxes, vote, attend schools and contribute to the economy; but as forced evictions increase, families often lose these rights and end up deeper in poverty than before.

In most cases, evictions are conducted without any due process, adequate notice or compensations. Sometimes evictions happen in the middle of the night or come in the form of house demolition, leaving residents no time to collect their only possessions before becoming homeless.

“This is a massive injustice. No one can be forcibly evicted, no matter where they live,” said Amnesty International in a campaign letter. “This is illegal under international and regional human rights standards, which African government have committed to.”

According to rights groups, under the African Charter on Human and Peoples’ Rights, governments may carry out evictions only as a last resort, once all other alternative options have been explored. The African Charter, adopted in 1981, also alleges that governments must ensure that no one becomes homeless as a result of an eviction.

The charter is understood to include the right to housing through various provisions about the right to health, food, development and property. Amnesty International urges African governments to not only immediately stop forced evictions, but also to carry out other obligations under the African Charter by ensuring that people living in slums have access to water, sanitation, health care, education and security.

“This is against international law: People living in informal settlements have the same rights to adequate housing, water, sanitation, education and health care as all others do,” the organization said.

The threat of forced evictions sends a particular chill down the spines of residents across Southern Africa as a reminder of the region’s long history of evictions and forced relocations during colonialism and apartheid.

“Back in 1959/60 people were forcefully removed from the Old Location but at least the apartheid regime, at the time, provided them with some decent living spaces to go to,” wrote one concerned citizen in the Namibian.

In Namibia, the government has been known to demolish shacks using the Squatters Proclamation of 1985, an apartheid-era law that allows the landowner to remove illegally constructed buildings without any court order or prior notice to the occupants.

It is estimated that 25 percent of Windhoek’s 300,000 people live in shacks and informal settlements, constantly under threat of forced eviction. The Legal Assistance Centre (LAC) has been trying to overturn the Squatters Proclamation since 2009. The High Court ruled in 2010 that while parts of the law may be constitutional, the squatters presenting the 2009 case were on the land illegally and must first obey the law and then attack it again.

“These people are not at fault. They are simply desperate people looking for a place to stay,” believes Norman Tjombe, director of the LAC.

“Imagine children who are evicted from their homes and have to sleep under a bridge. Their right to education is likely affected, their dignity is affected,” said Tjombe during the 2009 case. “For families, their right to privacy and to security of person is violated. Their right to the peaceful enjoyment of possessions is violated as many of the forced evictions occurred without warning, forcing people to abandon their homes, lands and worldly possessions.”

In the past few months, the Namibian government has resorted to bulldozing away whole communities of informal settlers similar to the use of casspirs in the time of apartheid. These house demolitions took place during the coldest months of winter, leaving families homeless and freezing with nowhere to go.

In a statement, the SWAPO ruling party’s youth league called the act “deplorable, barbaric and inhuman.”

“Inasmuch as we respect the rule of law, it is also important that sometimes human consideration is more important than technicalities,” wrote youth league secretary Dr. Elijah Ngurare. “Similarly, in this case the timing of the City of Windhoek is suspect and wrong.”

Forced evictions, which continue at an alarming rate across Angola, Chad, Kenya, Ghana, Sudan and Egypt among other countries worldwide, are being met by rising opposition from groups like Homeless International and Shack/slum Dwellers International (SDI).

These organizations view the problem of squatter occupation on a larger scale, focusing on the lack of affordable housing, unemployment and poverty as a failure of government development policies. “Achieving scale in urban development policy and practices begins at the individual settlement level,” believes SDI. “When local authorities engage with informal settlement communities, residents become active partners in upgrading their built environment.”

The magnitude of construction in illegal settlements reflects broader societal issues that cannot be fixed by simply demolishing shacks. Families without enough income to purchase a new home will rebuild in another informal settlement.

By urging communities and governments to negotiate together, international rights groups and NGOs hope to transform slums by increasing land security and access to safe water and sanitation, thereby eliminating the fear associated with illegal evictions.