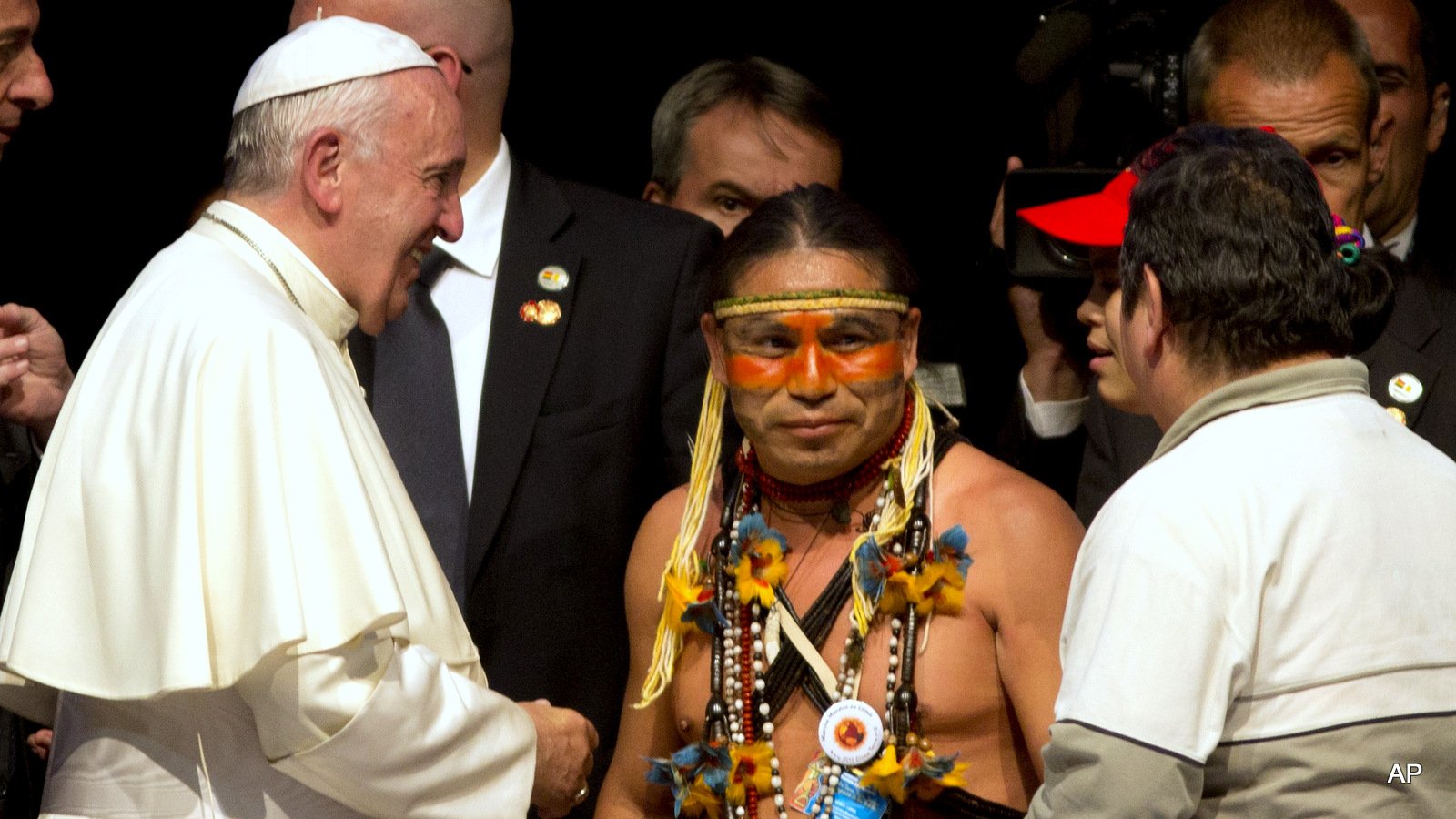 Campesino leader Amandina Quispe, of Anta, Peru, who attended the grass-roots summit, said the church still holds lands it should give back to Andean natives.

Pope Francis talks to Indian leaders and social workers at the second World Meeting of Popular Movements in Santa Cruz, Bolivia, Thursday, July 9, 2015. During his speech at the meeting, history’s first Latin American pope apologized for the sins and “offenses” committed by the Catholic Church against indigenous peoples during the colonial-era conquest of the Americas.

SANTA CRUZ, Bolivia — Pope Francis apologized Thursday for the sins, offenses and crimes committed by the Catholic Church against indigenous peoples during the colonial-era conquest of the Americas, delivering a powerful mea culpa on the part of the church in the climactic highlight of his South American pilgrimage.

History’s first Latin American pope “humbly” begged forgiveness during an encounter in Bolivia with indigenous groups and other activists and in the presence of Bolivia’s first-ever indigenous president, Evo Morales.

Francis noted that Latin American church leaders in the past had acknowledged that “grave sins were committed against the native peoples of America in the name of God.” St. John Paul II, for his part, apologized to the continent’s indigenous for the “pain and suffering” caused during the 500 years of the church’s presence in the Americas during a 1992 visit to the Dominican Republic.

But Francis went farther, and said he was doing so with “regret.”

“I would also say, and here I wish to be quite clear, as was St. John Paul II: I humbly ask forgiveness, not only for the offenses of the church herself, but also for crimes committed against the native peoples during the so-called conquest of America,” he said to applause from the crowd.

Then deviating from his prepared script, he added: “I also want for us to remember the thousands and thousands of priests who strongly opposed the logic of the sword with the power of the cross. There was sin, and it was plentiful. But we never apologized, so I now ask for forgiveness. But where there was sin, and there was plenty of sin, there was also an abundant grace increased by the men who defended indigenous peoples.”

Francis’ apology was met with wild applause from the indigenous and other grass-roots groups gathered for a world summit of popular movements whose fight against injustice and social inequality has been championed by the pope.

“We accept the apologies. What more can we expect from a man like Pope Francis?” said Adolfo Chavez, a leader of a lowlands indigenous group. “It’s time to turn the page and pitch in to start anew. We indigenous were never lesser beings.”

The apology was significant given the controversy that has erupted in the United States over Francis’ planned canonization of the 18th century Spanish priest Junipero Serra, who set up missions across California. Native Americans contend Serra brutally converted indigenous people to Christianity, wiping out villages in the process, and have opposed his canonization. The Vatican insists Serra defended natives from colonial abuses.

Francis’ apology was also significant given the controversy that blew up the last time a pope visited the continent. Benedict XVI drew heated criticism when, during a 2007 visit to Brazil, he defended the church’s campaign to Christianize indigenous peoples. He said the Indians of Latin America had been “silently longing” to become Christians when Spanish and Portuguese conquerors violently took over their lands.

“In effect, the proclamation of Jesus and of his Gospel did not at any point involve an alienation of the pre-Columbus cultures, nor was it the imposition of a foreign culture,” Benedict told the continent’s bishops.

Amid an outcry from indigenous groups, Benedict subsequently acknowledged that “shadows accompanied the work of evangelizing” the continent and said European colonizers inflicted “sufferings and injustices” on indigenous populations. He didn’t apologize, however.

The Vatican spokesman, the Rev. Federico Lombardi, said that Francis wrote the speech on his own and that the apology for the sins, offenses and crimes of the church was a “particularly important declaration.”

Church officials have long insisted Catholic missionaries protected indigenous peoples from the abuses of military colonizers and were often punished by European colonial powers as a result. Francis’ own Jesuit order developed missions across the continent, educating the indigenous and turning their communities into organized Christian-Indian societies. The Jesuits were expelled in the 17th century.

Mexican Bishop Raul Vera, who attended the summit where Francis made the apology, said the church was essentially a passive participant in allowing natives to become enslaved under the Spanish “encomienda” system, by which the Spanish king granted land in conquered territories to those who settled there. Indians were allowed to live on the haciendas as long as they worked them.

“It’s evident that the church did not defend against it with all its efforts. It allowed it to be imposed,” Vera told The Associated Press earlier Thursday.

He acknowledged that John Paul had previously asked forgiveness for the church’s sins against indigenous. But he said Francis’ apology was particularly poignant given the setting.

Campesino leader Amandina Quispe, of Anta, Peru, who attended the grass-roots summit, said the church still holds lands it should give back to Andean natives. The former seat of the Inca empire, conquered by Spaniards in the 16th century, is an example.

“The church stole our land and tore down our temples in Cuzco and then it built its own churches — and now it charges admission to visit them,” she said.

Francis’ apology was not the first. After his 1992 apology, John Paul II issued a sweeping but vague apology for the Catholic Church’s sins of the past during the church’s 2000 Jubilee. A year later, he apologized specifically for missionary abuses against aborigines in Oceania. He did so in the first ever papal email.

During the speech, the longest and most important of Francis’ week-long, three-nation South American trip, the pope touched on some of the key priorities of his pontificate: the need to change an unjust global economic system that excludes the poor and replace it with a “communitarian economy” involving the “fitting distribution” of the Earth’s resources.

“Working for a just distribution of the fruits of the Earth and human labor is not mere philanthropy. It’s a moral obligation,” he said.

He ended the speech with a fierce condemnation of the world’s governments for what he called “cowardice” in defending the Earth. Echoing his environmental encyclical of last month, the pope said the Earth “is being pillaged, laid waste and harmed with impunity” while “one international summit after another takes place without any significant result.”

He urged the activists present to “keep up your struggle.”

It was a message he articulated earlier in the day when he denounced the “throwaway” culture of today’s society that discards anyone who is unproductive. He made the comments as he celebrated his first public Mass in Bolivia, South America’s poorest country.

The government declared a national holiday so workers and students could attend the Mass, which featured prayers in Guarani and Aimara, two of Bolivia’s indigenous languages, and an altar carved from wood by artisans of the Chiquitano people.

In a blending of the native and new, the famously unpretentious pope changed into his vestments for the Mass in a nearby Burger King.