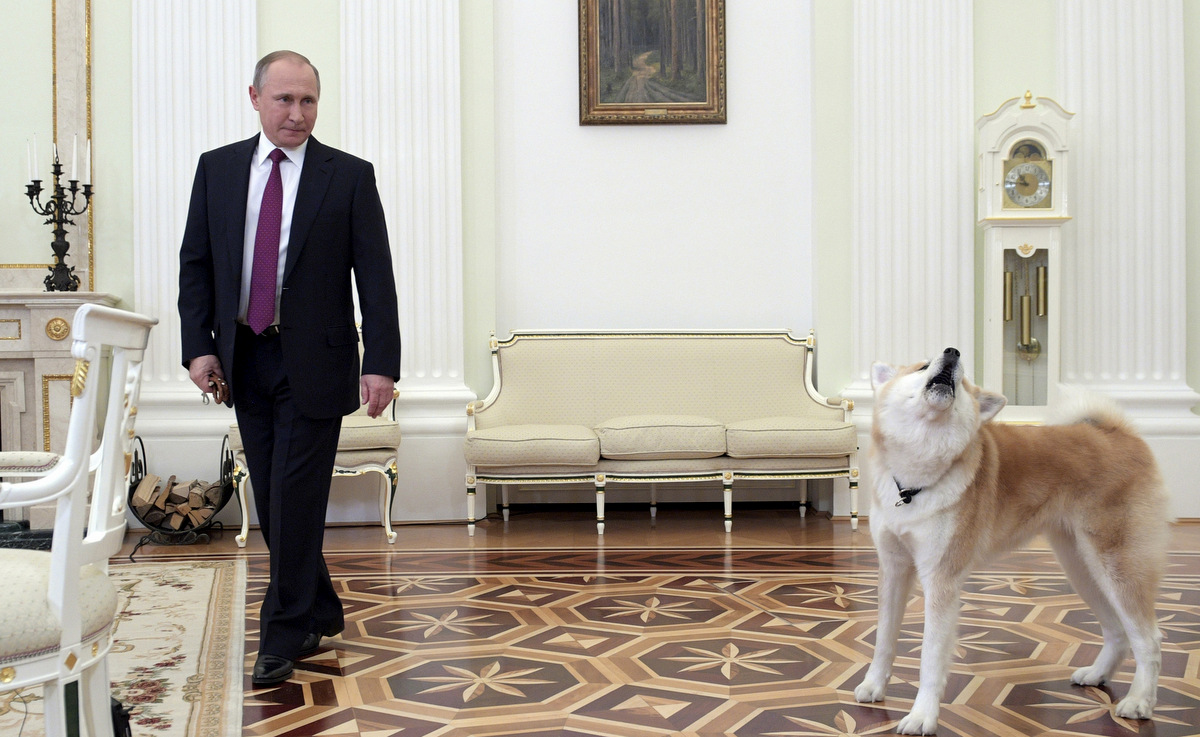 The Mystery Of The Russia-gate Puppies

The U.S. mainstream media is determined to prove Russia-gate despite the scandal’s cracking foundation and its inexplicable anomalies, such as why Russia would set up a Facebook “puppies” page.

What is perhaps most unprofessional, unethical and even immoral about the U.S. mainstream media’s coverage of Russia-gate is how all the stories start with the conclusion – “Russia bad” – and then make whatever shards of information exist fit the preordained narrative.

For instance, we’re told that Facebook executives, who were sent back three times by Democratic lawmakers to find something to pin on Russia, finally detected $100,000 worth of ads spread out over three years from accounts “suspected of links to Russia” or similar hazy wording.

These Facebook ads and 201 related Twitter accounts, we’re told, represent the long-missing proof about Russian “meddling” in the U.S. presidential election after earlier claims faltered or fell apart under even minimal scrutiny.

For example, not only have major questions been raised about whether Russian intelligence operatives were behind the “hacking” of Democratic emails, but the Senate Intelligence Committee announced on Wednesday that two early elements of the Russia-gate hysteria — minor changes that were made to the Republican platform and a brief meeting between Russian Ambassador Sergey Kislyak and then-Sen. (now Attorney General) Jeff Sessions at Washington’s Mayflower Hotel — have been dropped as innocent or inconsequential.

But like all good conspiracy theories, once one allegation is dismissed as meaningless, it is replaced by another and another.

In the old days, journalists might have expressed some concern that Facebook “found” the “Russia-linked” ads only under extraordinary pressure from powerful politicians, such as Sen. Mark Warner, D-Virginia, the vice chairman of the Senate Intelligence Committee and a leading legislator on the tech industry. But today’s mainstream reporters took Warner’s side and made it look like Facebook had been dragging its heels and that there must be much more out there.

However, it doesn’t really seem to matter how little evidence there is. Anything will do.

Even the paltry $100,000 is not put in any perspective (Facebook has annual revenue of $27 billion), nor the 201 Twitter accounts (compared to Twitter’s 328 million monthly users). Nor are the hazy allegations of “suspected … links to Russia” subjected to serious inspection. Although Russia is a nation of 144 million people and many divergent interests, it’s assumed that everything must be personally ordered by President Vladimir Putin.

Yet, if you look at some of the details about these $100,000 in ads, you learn the case is even flimsier than you might have thought. The sum was spread out over 2015, 2016 and 2017 – and thus represented a very tiny pebble in a very large lake of Facebook activity.

But more recently we learned that only 44 percent of the ads appeared before Americans went to the polls last November, according to Facebook; that would mean that 56 percent appeared afterwards.

So, as miniscule as the $100,000 in ad buys over three years may have seemed, the tiny pebble turns out really to be only a fraction of a tiny pebble if the Russians indeed did toss it into the 2016 campaign.

What About the Puppies?

Vladimir Putin poses for the camera as he plays with his dogs Yume, an Akito-Inu, front, and Buffy, a Bulgarian Shepherd in an undisclosed location of Moscow region.(AP/RIA Novosti, Alexei Druzhinin)

We further have learned that most ads weren’t for or against a specific candidate, but rather addressed supposedly controversial issues that the mainstream media insists were meant to divide the United States and thus somehow undermine American democracy.

As Mike Isaac and Scott Shane of The New York Times reported in Tuesday’s editions, “The Russians who posed as Americans on Facebook last year tried on quite an array of disguises. … There was even a Facebook group for animal lovers with memes of adorable puppies that spread across the site with the help of paid ads.”Except, it turns out that one of the issues was puppies.

Now, there are a lot of controversial issues in America, but I don’t think any of us would put puppies near the top of the list. Isaac and Shane reported that there were also supposedly Russia-linked groups advocating gay rights, gun rights and black civil rights, although precisely how these divergent groups were “linked” to Russia or the Kremlin was never fully explained. (Facebook declined to offer details.)

At this point, a professional journalist might begin to pose some very hard questions to the sources, who presumably include many partisan Democrats and their political allies hyping the evil-Russia narrative. It would be time for some lectures to the sources about the consequences for taking reporters on a wild ride in conspiracy land.

Yet, instead of starting to question the overall premise of this “scandal,” journalists at The New York Times, The Washington Post, CNN, etc. keep making excuses for the nuttiness. The explanation for the puppy ads was that the nefarious Russians might be probing to discover Americans who might later be susceptible to propaganda.

“The goal of the dog lovers’ page was more obscure,” Isaac and Shane acknowledged. “But some analysts suggested a possible motive: to build a large following before gradually introducing political content. Without viewing the entire feed from the page, now closed by Facebook, it is impossible to say whether the Russian operators tried such tactics.”

The Joe McCarthy of Russia-gate

The Times then turned to Clint Watts, a former FBI agent and a top promoter of the New McCarthyism that has swept Official Washington. Watts has testified before Congress that almost anything that appears on social media these days criticizing a politician may well be traceable to the Russians.

Watts also claimed that Sen. Marco Rubio’s presidential bid “anecdotally suffered” from an online Russian campaign against him, though many of you may have thought Rubio flamed out because he was a wet-behind-the-ears candidate who performed robotically in the debates and received the devastating nickname “Little Marco” from Donald Trump.For instance, last March, Watts testified in conspiratorial terms before the Senate Intelligence Committee about “social media accounts discrediting U.S. Speaker of the House Paul Ryan.” At the time, Ryan was under criticism for his ham-handed handling of a plan to “repeal and replace” Obamacare, but Watts saw possible Russian fingerprints.

Watts explained that these nefarious Russian schemes left no discernible earmarks or detectable predictability. Russians attack “people on both sides of the aisle … solely based on what they [the Russians] want to achieve in their own landscape, whatever the Russian foreign policy objectives are,” Watts complained.

Watts’s vague allegations appear to have been the impetus behind Sen. Warner’s repeated demands that Facebook find some evidence to support the suspicions. After Facebook came up empty twice, Warner flew to Silicon Valley to personally confront Facebook executives who then found what Warner wanted them to find, the $100,000 in suspected Russia-linked ad buys.

So, it perhaps made sense that the Times would turn to Watts to explain the rather inexplicable Russian exploitation of puppies. According to Isaac and Shane, Watts “said Russia had been entrepreneurial in trying to develop diverse channels of influence. Some, like the dogs page, may have been created without a specific goal and held in reserve for future use. ‘They were creating many audiences on social media to try to influence around,’ said Mr. Watts, who has traced suspected Russian accounts since 2015.”

In other words, if you start with the need to prove Russian guilt, there are no alternative explanations besides Russian guilt. If some fact, like the puppies page, doesn’t seem to fit the sinister conspiracy theory, you simply pound it into place until it does.

Yes, of course, Russian intelligence operatives must be so sneaky that they are spending money (but not much) on Facebook puppy ads so they might sometime in the future slip in a few other ideological messages. It can’t be that perhaps the ads were not part of some Russian government intelligence operation.

But even if we want to believe that these ads are a Russ-kie plot and were somehow intended to sow dissension in the U.S., the totals are insignificant, a subset of a subset of a subset of $100,000 in ad buys over three years that, as far as anyone can tell, had no real  impact on the 2016 election – and surely much, much, much less than the political influence from, say, Israel.

If we apply Facebook’s 44 percent figure, that would suggest the total spending in the two years before the election was around $44,000 and much of that focused on a diverse set of issues, not specific candidates. So, if some Russians did spend money to promote gay rights and to push gun rights, any negligible impact on the 2016 election would more or less have been canceled out between Clinton and Trump.

Yet, over these still unproven and speculative allegations of Russian “links” to these Facebook ads, the national Democrats and their mainstream media allies are stoking a dangerous and expensive New Cold War with nuclear-armed Russia.

I realize that lots of Democrats were upset about Hillary Clinton’s humiliating defeat and don’t want to believe that she could have lost fairly to a buffoon like Donald Trump. So, they are looking for any excuses rather than looking in the mirror.

The major U.S. news outlets also have joined the anti-Trump Resistance, rather than upholding the journalistic principles of objectivity and fairness. The Post even came up with a new melodramatic slogan for the moment: “Democracy Dies in Darkness.”

But yellow journalism is not the way to shed light into darkness; it only blinds Democrats from seeing the real reasons behind Trump’s appeal to many working-class whites who feel disaffected from a Democratic Party that seems disinterested in their suffering.

Yes, I know that some Democrats are still hoping against hope that they can ride Russia-gate all the way to Trump’s impeachment and get him ridden out of Washington D.C. on a rail, but the political risk to Democrats is that they will harden the animosity that many in the white working class already feel toward the party.

That could do more to strengthen Trump’s appeal to these voters than to weaken him, while hollowing out Democratic support among millions of peace voters who may simply declare a plague on both parties.

Top photo | Vladimir Putin looks at his Akita-inu dog Yume before his interview with the Nippon Television Network Corporation and the Yomiuri Shimbun prior to his visit to Japan and meeting with Japan’s Prime Minister Shinzo Abe, in the Kremlin in Moscow, Russia. (Alexei Druzhinin/ Sputnik via AP)