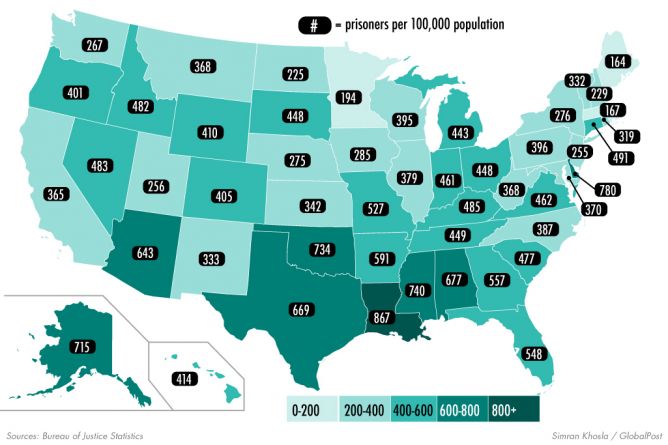 Four of the states in the US have a higher prison population per 100,000 than any nation abroad.

The incarceration rate in the US is the highest in the world.

If those stats aren’t enough to shock you, consider that the state of New Hampshire alone has about the same number of prisoners as the entire country of Israel.

Of course, the overflow of prisoners in the US causes all sorts of problems. For starters, it’s expensive to incarcerate people. Those pushing for prison reform have been steadily raising their voices.

To create the map below, we used US prisoner population estimates from the Bureau of Justice Statistics. Their most recent survey reports final counts of prisoners under the jurisdiction of state and federal correctional authorities on Dec. 31, 2013.

Each state is labelled with the country that has the closest corresponding number of prisoners per 100,000 people. Not every state has a close match, states that don’t have a nation with a similar prison population per 100,000 are labelled “no equivalent nation.”