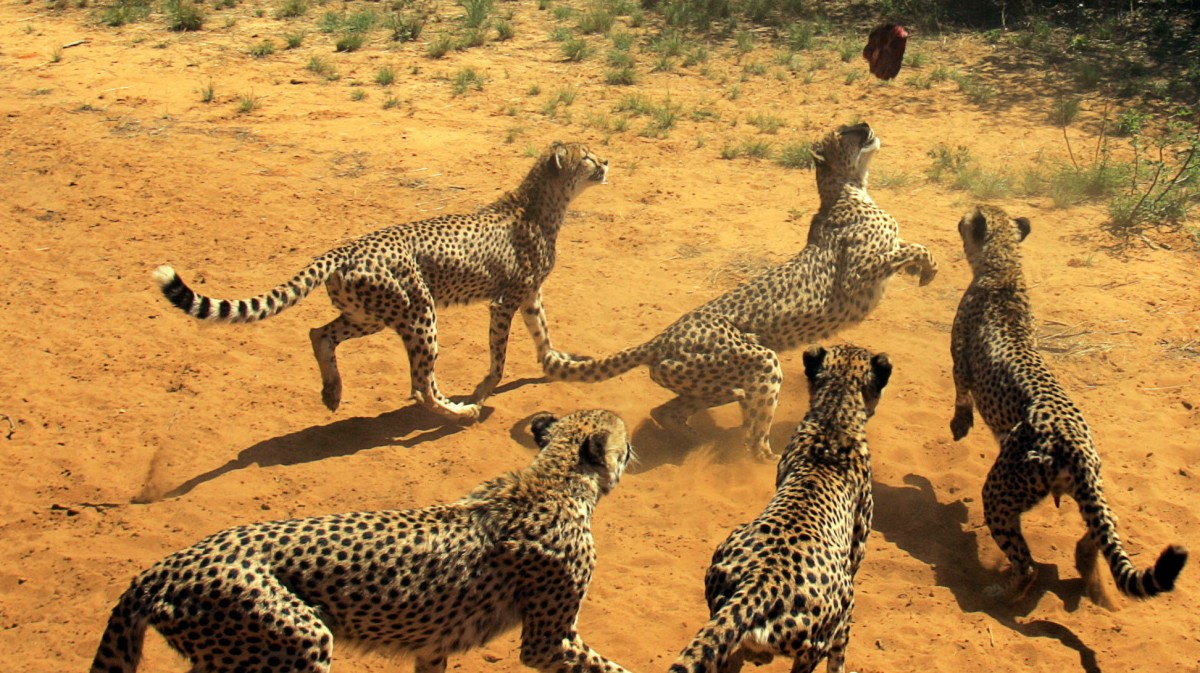 Is Namibia’s Internationally-Acclaimed Conservancy Model A Cookie-Cutter For Development? A cheetah jumps for a chunk of meat whilst others watch during the morning feeding tour in their large enclosures at The Harnas Wildlife Foundation farm in Gobabis, Namibia, Wednesday, Oct. 25, 2006. (AP Photo/Themba Hadebe)

(NAMIBIA) MintPress— As the United Nations Biodiversity Conference wrapped up in India last month, Namibia once again found itself at the forefront of wildlife conservation after being awarded the prestigious Markhor Award by the International Council for Game and Wildlife Conservation (CIC).

The Markhor Award, which celebrates outstanding conservation projects that link the conservation of biodiversity and human livelihoods, was presented at the 11th Conference of the Parties on the Convention of Biological Diversity in the presence of the Namibian Ministry of Environment and Tourism and the Namibian Association of Community-Based Natural Resource Management Support Organizations (NACSO).

“It is not everyday that we hear about success stories in the field of nature and wildlife conservation. As such, Namibia should serve as a prime example in terms of its innovative approaches to the conservation and sustainable use of biodiversity, in particular its wildlife,” said Bernard Lozé, President of the CIC.

During apartheid, land was owned predominantly by whites, forcing black Namibians onto small plots of land with few resources or animals. The only way for many of these farmers to survive was by poaching, resulting in the near extinction of many animals.

Through millions of dollars in international donations, including over $250 million in contributions from USAID, the Namibian government has turned poachers in to gamekeepers by establishing conservancy programs, which serve as an international model of successful community-based natural resource management.

When the program started in the late 90s, there were only four conservancies. Today, the country has 79 conservancies covering nearly 19 percent of the country, and dozens more are awaiting approval.

“This award will be a motivating factor for us to do even more in the area of conservation, particularly based on the understanding that the sustainable utilization of our natural resources is key,”  the Namibian high commissioner to India said at the award ceremony.

Community conservancies: A model for the world

When the first Namibian conservancy began in 1998, USAID was among the first international donors to jump on board. The Namibian reported that USAID’s 20-year investment has produced conservancies that were making N$45 million in net benefit in 2010.

“This goes to show that once a government is committed and prepared to invest in a worthy project, over 20 years it will eventually bear fruit and help the communities who most need it, whether it is the US who funds it or the Namibian government who started the conservancies,” said Elzadia Washington-Danaux, the mission director of USAID in Namibia.

Over the past 20 years, the Namibian conservancy model has not only benefited Namibians, but has even begun to share its fruits with conversationalists back in the United States. Earlier this fall, a delegation of 14 Namibians participated in a “No Borders Tour” of Southeastern Montana and Yellowstone Park, where they met with property owners, managers and government officials to exchange models of successful wildlife conservation.

At the invitation of Austin-Lehman Adventures, a Montana-based company, the Namibian delegates met mainly with members of the Crow Indian Nation, sharing ideas about communal-private tourism partnerships and learning tips about human-wildlife conflict in return.

Dan Austin, Director of Austin-Lehman Adventures and Founder of the Wheels of Change non-profit organization, was so impressed after a visit to Namibia’s communal conservancies in the Kunene region, that he invited the group of Namibian conversationalists and tourist managers to the United States to discuss how their community-ownership models may be shared with American Indian tribes on reservations in the West, where most hotels are privately-owned or in control of the government. Namibian delegates also learned how to incorporate sustainable adventure tourism activities like biking and rafting into their local conservancies.

The Namibians found many similarities with the Crow Nation, including a history of Christian conversion, submission to the English language and reservation laws that raise memories of pass laws and homelands from the apartheid-era in southern Africa.

The two groups also found common ground regarding wildlife populations and the effect increased predator populations have on farmland. Western cattle ranchers blame grey wolves for increased attacks on their elk and cattle. The increases in elephants, cheetahs and lions have a similar effect on crops and cattle in Namibia.

Woes of the blanket approach

There is no doubt that Namibia’s conservancy programs have had their fair share of success. In the northwest Kunene region, Hartmann’s mountain zebra numbers have grown to 27,000 from only 1,000 in 1982. Namibia has the largest black rhino population in the world, and the number of desert-adapted elephants is five times higher than in 1982.

The combined total earnings of Namibia’s conservancies total more than $4.8 million, derived mainly from trophy hunting and tourism. The CIC links the country’s success to the Namibian Conservation Amendment Act of 1996, which engaged the private sector and rural communities in the sustainable use of wildlife on communal land.

Private-public partnerships attribute to the success of the Torra conservancy in northwest Namibia, where the privately-run Damaraland Camp pays rent to the conservancy and hires locals in exchange for running a luxury lodge that brings in large-scale tourism, job creation, marketing and training for local employees.

While Namibia’s conservancy model works well in the northern parts of the country, not all community-based resource management programs reap such good benefits, leaving many to question whether the model can actually be sustainable throughout the entire country.

“Southern conservancies suffer very much without campsites and big-5 game animals,” said Mr. Davids, a former employee of the Namibian Development Trust (NDT). “Their only income is through sales of wildlife, and that is very minimal, less than N$100,000.” Most of the money raised by southern conservancies goes directly into operational costs.

The NDT started in 1987 as a non-governmental organization focused on building up marginalized communities, mainly in rural settings, through capacity building initiatives like ecotourism and conservancies.

“The idea was to put up infrastructure and have communities come in and take initiative,” said Mr. Davids. “Communities should take ownership by showing interest, attending meetings and guarding against vandalism.”

The Ganigobes community campsite in southern Namibia began as a project of the NDT back in 2007. The site was deemed to be “well-situated for tourism” with a beautiful view of the Brukkaros Mountain and Fish River as well as a natural hot spring on site.

“The campsite was inaugurated by the EU in 2010,” said Bernardus van Rensbrug who currently runs the campsite. “We have had two visitors this year, and we are in the process of negotiating our water problem,” added Rensburg.

The two visitors at Ganigobes this year are the site’s only overnight visitors to date. A group of students have also stopped by on a day trip.

Over the years, the program lost its EU funding, and the Namibian Development Trust (NDT) — also previously supported by the EU — has been forced to close as well.

“Our biggest challenge in marketing,” said Rensburg. “In order to get a road sign, we need to register with the Namibian Tourism Board.” The NDT was not able to register the site before the organization shut down due to a lack of funding.

While Davids wishes communities would take ownership of their own projects, he also acknowledges the barriers communities face in running campsites.

Davids told MintPress that in order to register with the Namibian Tourism Board, the Ganigobes campsite would need to acquire a lease agreement — a process rife with bureaucracy that can take ages to achieve for a community with no funding and no direct support from the government.

“Our hope is for the Ministry [of Environment and Tourism] to create a development fund to supplement the absence of NGOs in conservancies, especially in the South,” said Davids.

The community in Ganigobes is in the process of applying for conservancy status in hopes that as a conservancy, the community will be able to buy game animals at a cheaper rate to attract more visitors to the area.

Even with more springbok and ostriches, the Ganigobes community will need significant government funding or support from private-partnerships with the already-established luxury resorts in the region in order to emulate Namibia’s successful conservancy models in the northern part of the country.