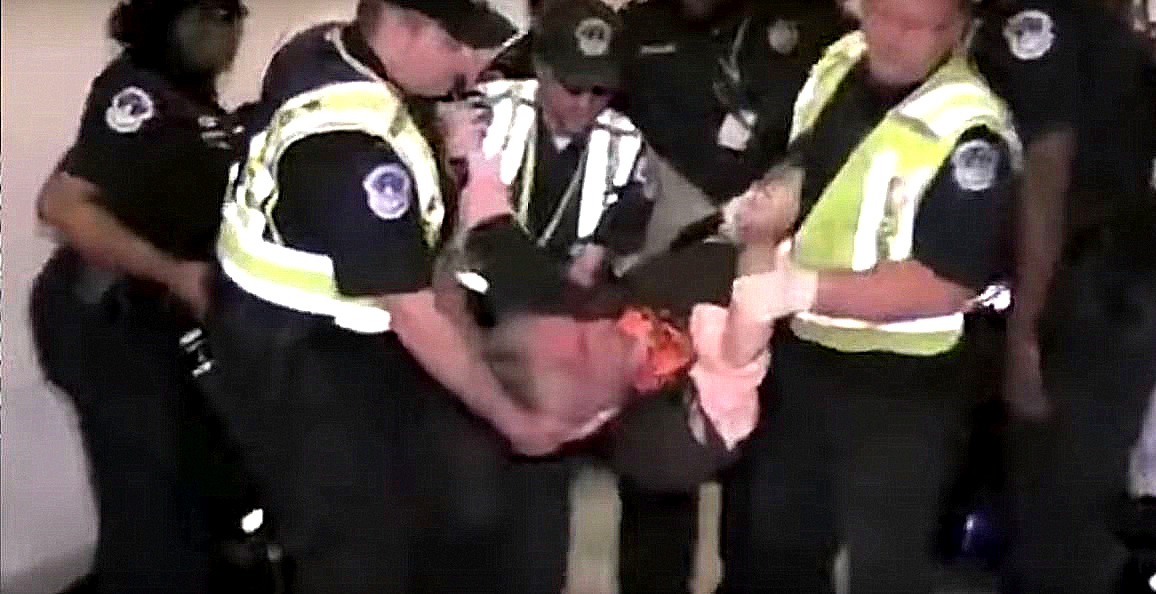 “Our lives and liberty shouldn’t be stolen to give a tax break to the wealthy. That’s truly un-American.”

A Trumpcare opponent being carried from a sit-in outside of Senate Majority Leader Mitch McConnell’s office on Thursday morning after the Republicans released their draft version of a healthcare overhaul bill. (Photo: Screenshot)

Soon after a draft version of the Republican’s Senate version of their Trumpcare care bill was released Thursday morning, Capitol Hill Police were systematically arresting people who staged a dramatic sit-in outside of Senate Majority Leader Mitch McConnell’s office.

Amid chants of “Don’t Touch Medicaid!” and signs suggesting the same, many of those protesting the Senate bill were either elderly or in wheelchairs, offering a stunning visual as police tried to remove them from the hallway.

ADAPT, the national disability rights group behind the protest said the Senate’s bill is a direct threat to the future of people with pre-existing conditions and disabilities.

The proposed caps and cuts to Medicaid contained in the Republican bill, said ADAPT organizer Bruce Darling, would “greatly reduce access to medical care and home and community-based service for elderly and disabled Americans who will either die or be forced into institutions.

We are at @SenateMajLdr demanding he stop the attacks on Disabled people's freedom with #AHCA. #ADAPTandRESIST #NoC… https://t.co/B42G96LStA

Security is quite literally dragging people away from outside McConnell's office pic.twitter.com/70uJ4P88rS

Another person just dragged away pic.twitter.com/H8ek4AjXrP

Our lives and liberty shouldn’t be stolen to give a tax break to the wealthy.