There were specific economic decisions that created the Greek crisis. It needn’t have happened if it weren’t deemed useful by the powers-that-be in Europe. The crisis was real, but it was largely manufactured by people who were creating distractions from Europe’s real problems.

ATHENS, GREECE -- Greek-born economist Yanis Varoufakis, who served as finance minister of the SYRIZA-led Greek government from its election in January 2015 until July 2015, has regularly been afforded rockstar status by the international mainstream media and by such personalities as Noam Chomsky and Julian Assange. In the aftermath of Greece’s

END_OF_DOCUMENT_TOKEN_TO_BE_REPLACED

Professor Déborah Berman-Santana’s discusses the cynical manipulation of post-Maria recovery efforts. The effect so far has been to enrich the powerful and delay return to normal life for millions of Puerto Ricans.

LAS PIEDRAS, PUERTO RICO – In this second part of her interview with MintPress News, Professor Déborah Berman-Santana’s focus turns to the cynical manipulation of post-Maria recovery efforts. The effect so far has been to enrich the powerful and delay return to normal life for millions of Puerto Ricans.  You can read part one of Berman-Santana’s

END_OF_DOCUMENT_TOKEN_TO_BE_REPLACED

Colonization of Land and Mind: The Struggle for a Post-Colonial Puerto Rico

Part of the problem with the colonized mentality is that the one who is colonized begins to believe the lies that have been told by the colonizer: that we are inferior, we are backward, that we would be poor, that we would have no hope if it were not for a more developed, more civilized, more powerful entity. ATHENS, GREECE and LAS PIEDRAS, PUERTO RICO – Until recently, the similarities were stunning. Puerto Rico, mired in a deep economic crisis for the past decade, has often been dubbed “The Greece of the Caribbean.” While there are a great many similarities in the “debt crises” both Greece and Puerto Rico have been experiencing, this superficial

END_OF_DOCUMENT_TOKEN_TO_BE_REPLACED

How To Become A Greek Oligarch In Seven Easy Steps

To become a modern Greek oligarch, you don’t need a vast shipping empire a la Onassis. You just need some seed money, a sports team or two, some media properties, a curated public image, and some quid pro quo with the SYRIZA government that once promised to crush you. ATHENS, GREECE -- Greece is a country that is famously known for its strong tradition in the maritime sector, and for its many wealthy shipowners. Names such as Onassis and Latsis have become globally known and are synonymous with great wealth and with a playboy lifestyle of mingling with the rich and famous. Greece is also a country whose

END_OF_DOCUMENT_TOKEN_TO_BE_REPLACED

Putting Grexit On The Table: How A Greek Exit From The EU Would Work

There is no shortage of viable plans for a departure from the eurozone or, in some instances, the EU. All require a measure of fortitude and adaptability–a willingness to step beyond what is, in fact, a very uncomfortable comfort zone. The question is whether the Greek ethos can rise to this challenge. 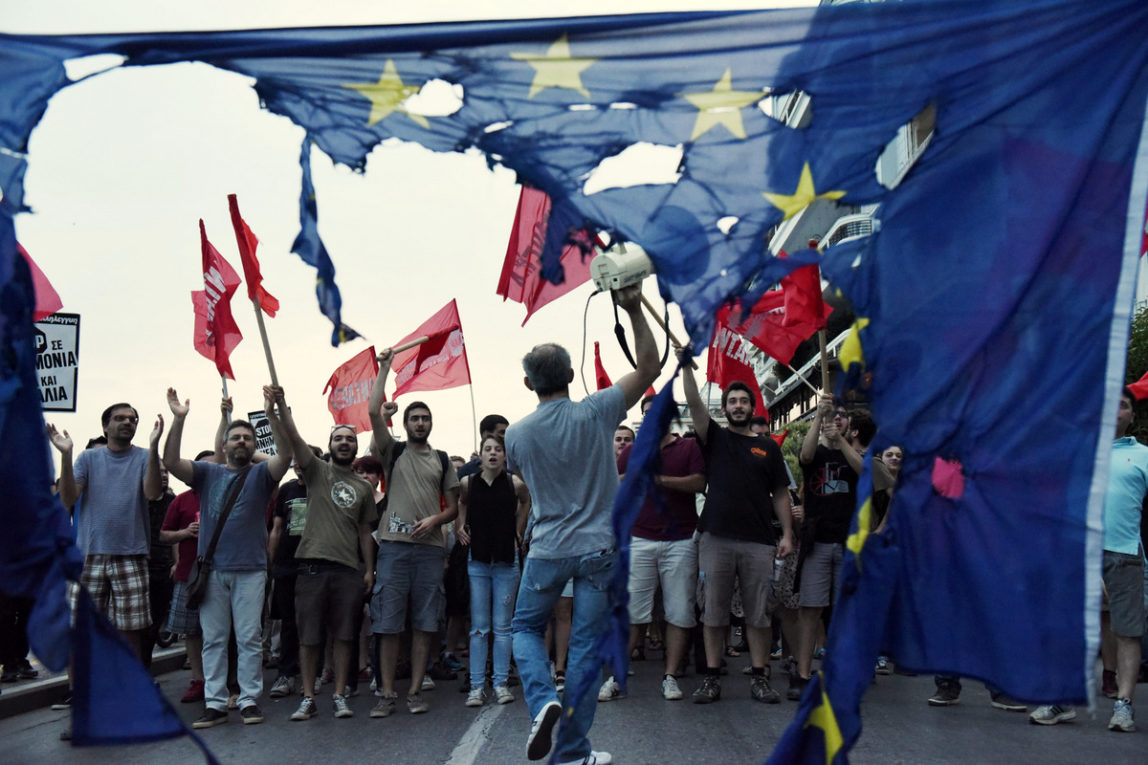 ATHENS, GREECE -- In the second and previous installment of this series, which generated a great deal of consternation -- reflecting the inferiority complex and pro-EU dogmatism prevalent in much of Greek society -- the grim future Greece would face by opting to retain its protectorate status with the EU and eurozone was examined. It was shown to

END_OF_DOCUMENT_TOKEN_TO_BE_REPLACED

Greece Could Leave The EU: Why The Grexit Option Deserves Consideration

With the Greek psyche itself the victim of a relentless shaming campaign, the idea of Greece “going it alone” begins to seem outlandish and quixotic. It is not. But it is as much tied to a revival of spirit and self-esteem as to the nuts and bolts of economic transformation. Eight years into the deepest economic depression that an industrialized country has ever experienced, we are now being told that Greece is a “success story.” Having accepted the “bitter medicine” prescribed by the “troika”—the European Commission, the European Central Bank, and the International Monetary Fund—the storyline today is that Greece is

END_OF_DOCUMENT_TOKEN_TO_BE_REPLACED

The unflinching support for the EU and its institutions is not about preventing European countries from becoming “Afghanistan.” Not about preventing collapse. Not about the inconvenience of long lines at passport control. It is about promoting an ideology, a specific worldview, a vision for the way the world should work. ATHENS, Greece & LIMASSOL, Cyprus – (Analysis) It was way back in the ancient 1990s, when protesting crippling economic austerity measures, the economic imperialism of the International Monetary Fund (IMF) and the World Bank, and free trade deals such as NAFTA and the Agreement on Trade-Related Aspects of Intellectual Property Rights (TRIPS),