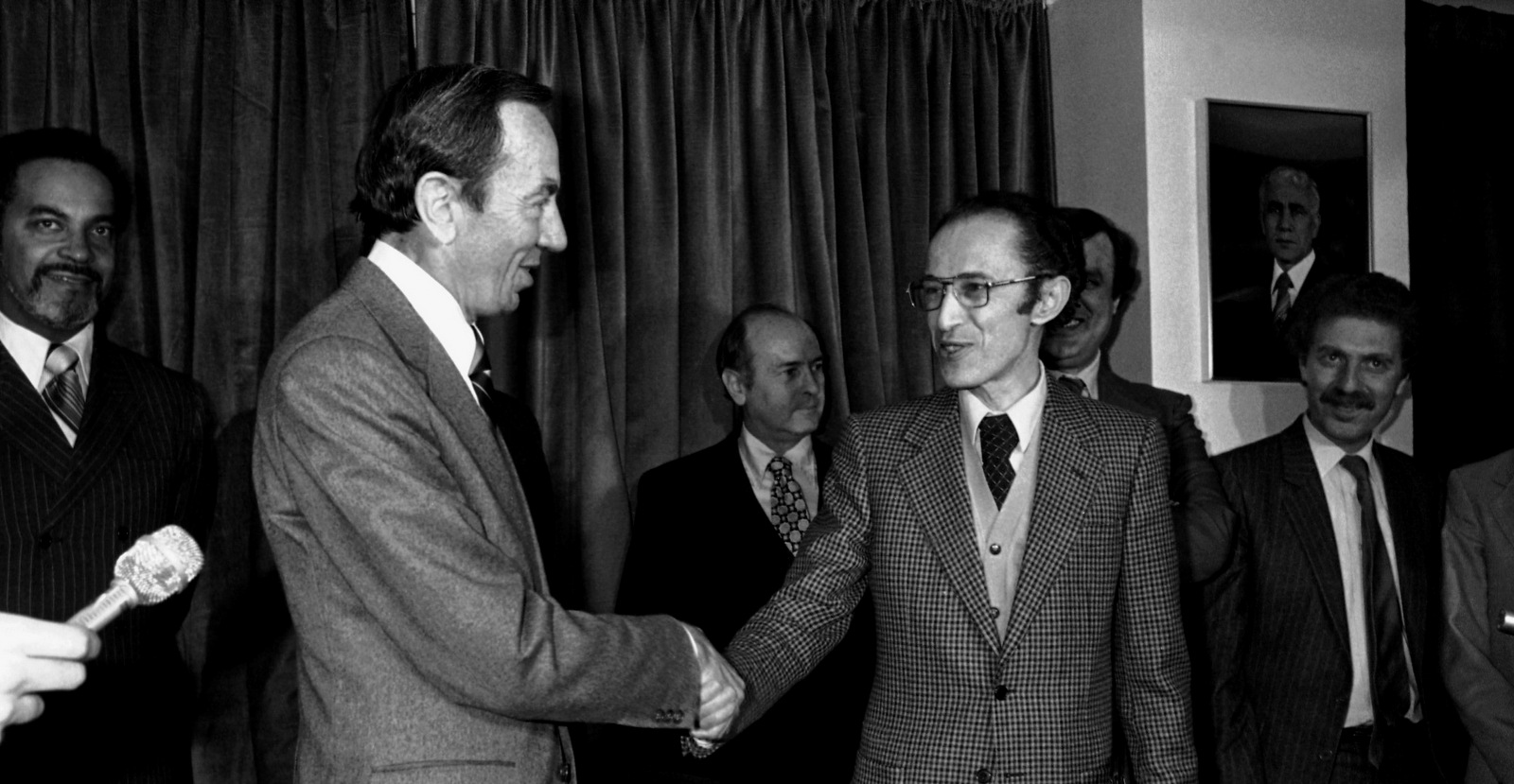 The 1981 Algiers Accords laid out the legal framework for US-Iranian relations, including provisions forbidding interference in each other’s internal politics and a ban on trade sanctions. One party to the agreement violated it terms almost as soon as the ink was dry.

This week marks the 37th anniversary of a pledge made by the United States in 1981:

The United States pledges that it is and from now on will be the policy of the United States not to intervene, directly or indirectly, politically or militarily, in Iran’s internal affairs.”

This week also marks 37 continuous years of the United States failing to uphold its pledge: the 1981 Algiers Accords.

Just how many people have heard of the 1981 Algiers Accords, a bilateral treaty signed on January 19, 1981 between the United States of America and the Islamic Republic of Iran? Chances are, not many.   Just as chances are that not many are fully aware of what actually led to the signing of this treaty.

Following the success of the 1979 Iranian Revolution that overthrew the Shah, America’s strongman in Iran, plans were made to topple the new government in Tehran.   In 1980, under the Carter administration, the United States began clandestine radio broadcasts into Iran from Egypt. The broadcasts called for Khomeini’s overthrow and urged support for Shahpur Bakhtiar[i], the last prime minister under the Shah.  Other plans included the failed Nojeh coup plot as well as plans for a possible American invasion of Iran using Turkish bases[ii].

The new Revolutionary government in Iran, with a look to the past and the 1953 British-CIA coup d’état that overthrew the Mossadegh government and reinstalled the Shah, had good reason to believe that the United States was planning to abort the revolution in its nascent stages.  Fearful, enthusiastic students took over the U.S. embassy in Tehran and took the diplomats as hostages in order to prevent such plans from fruition.

These events led to the negotiation and conclusion the Algiers Accords, point 1 of which was the pledge by the United States not to intervene in Iran’s internal affairs in any way. The Algiers Accords brought about the release of the American hostages and established the Iran–U.S. Claims Tribunal (“Tribunal”) at The Hague, the Netherlands.   The Tribunal ruled consistently “the Declarations were to be interpreted in accordance with the process of interpretation set out in the Vienna Convention on the Law of Treaties.”[iii] ([*])

A pledge on paper only

A pledge is only as valid and worthy as the person making it. From the onset, the United States failed to uphold its own pledge.  For instance, starting in 1982, the CIA provided $100,000 a month to a group in Paris called the Front for the Liberation of Iran. The group headed by Ali Amini who had presided over the reversion of Iranian oil to foreign control after the CIA-backed coup in 1953[iv]. Additionally, America provided support to two Iranian paramilitary groups based in Turkey, one of them headed by General Bahram Aryana, the former Shah’s army chief with close ties to Bakhtiar [v].

In 1986, the CIA went so far as to pirate Iran’s national television network frequency to transmit an address by the Shah’s son, Reza Pahlavi, over Iranian TV in which he vowed:  “I will return,”[vi].  The support did not end there. Pahlavi had C.LA. funding for a number of years in the eighties which stopped with the Iran-Contra affair.  He was successful at soliciting funds from the emir of Kuwait, the emir of Bahrain, the king of Morocco, and the royal family of Saudi Arabia, all staunch U.S. allies[vii].

In late 2002, Michael Ledeen joined Morris Amitay, vice-president of the Jewish Institute for National Security Affairs; ex-CIA head James Woolsey; former Reagan administration official Frank Gaffney; former senator Paul Simon; and oil consultant Rob Sobhani to set up a group called the Coalition for Democracy in Iran (CDI)[viii].  In spite of his lack of charisma as a leader, in May, 2003, Michael Ledeen wrote a policy brief for the American Enterprise Institute Web site arguing that Pahlavi would make a suitable leader for a transitional government, describing him as “widely admired inside Iran, despite his refreshing lack of avidity for power or wealth.”[ix]

In August 2003, the Pentagon issued new guidelines – All meetings with Iranian dissidents had to be cleared with Undersecretary of Defense for Policy Douglas Feith.  Reza Pahlavis’ name was included in the list of contacts that had been meeting with Pentagon analysts[x].

Concurrent with this direct interference, and in the following decade, Washington concentrated its efforts into putting a chokehold on the Iranian economy.  A provision of the Algiers Accords was that  “the United States will revoke all trade sanctions which were directed against Iran in the period November 4, 1979, to date.” Embargoes and sanctions became the norm.  Failing to interfere in Iran’s domestic affairs in order to topple the Islamic Republic through economic hardship, the United States once again turned up pressure through broadcasts and direct support for dissidents and terrorists – in conjunction with economic sanctions.

Funds from NED to interfere in Iran continued after the signing of the JCPOA.  The 2016 funding stood at well over $1m.

In September 2000, Senators openly voiced support for the MEK Terror group Mojahedin-e-khalgh.   Writing for The New Yorker, Connie Bruck revealed that:  “Israel is said to have had a relationship with the M.E.K at least since the late nineties, and to have supplied a satellite signal for N.C.RI. broadcasts from Paris into Iran.”[xii].  Perhaps their relationship with Israel and their usefulness explain why President Bush accorded the group ‘special persons status’[xiii].

(From left to right: Maryam Rajavi, former leader of the MEK and current leader of the National Council of Resistance of Iran talks with Rudy Giuliani and Senator Joe Lieberman at the free Iran Gathering, July 1, 2017. (Maryam Rajavi/Flickr)

During the illegal invasion and occupation of Iraq, the terrorist group got protection from the U.S. troops in Iraq despite getting pressure from the Iraqi government to leave the country (CNN[xiv]).  In 2005, “a Farsi-speaking former CIA officer says he was approached by neoconservatives in the Pentagon who asked him to go to Iran and oversee “MEK [Mujahideen-e Khalq] cross-border operations” into Iran.”

In addition to CIA funding and covert operations with help from terrorists, the United States actively used radio broadcasts into Iran to stir up unrest including Radio Farda and VOA Persian.   It comes as no surprise then that the recipient of NED funds, NIAC, should encourage such broadcasts.  Also, the BBC “received significant” sum of money from the U.S. government to help combat the blocking of TV and internet services in countries including Iran and China.”

It is crucial to note that while the United States was conducting secret negotiations with Iran which led to the signing of the Joint Comprehensive Plan Of Action (JCPOA), the MEK was delisted as a foreign terror organization.  This provides them with the legitimacy to write opinion pieces in leading American papers.

Also important to note that during the JCPOA negotiations, in which the United States participated as a party to an agreement, it was busy flouting the Treaty with its broadcasts into Iran – apparently, without objection.  But the violation was not limited to broadcasts.  Item B of the Treaty’s preamble states:

Through the procedures provided in the declaration relating to the claims settlement agreement, the United States agrees to terminate all legal proceedings in United States courts involving claims of United States persons and institutions against Iran and its state enterprises, to nullify all attachments and judgments obtained therein, to prohibit all further litigation based on such claims, and to bring about the termination of such claims through binding arbitration. “

Unsurprisingly, the U.S. again failed to keep its pledge and a partisan legislation allocated millions for the former hostages.

Clearly, the United States felt bound by the Treaty for it recognized Point 2 of the Algiers Accords when in January 2016 Iran received its funds, frozen by America, in a settlement at the Hague.  Perhaps for no other reason than to pacify Iran post JCPOA while finding the means to re-route Iran’s money back into American hands.

It would require a great deal of time and verse to cite every instance and detail of United States of America’s violation of a Treaty, of its pledge, for the past 37 years. But never has its attitude been more brazen in refusing to uphold its pledge and its open violation of international law than when President Trump openly voiced his support for protests in Iran and called for regime change.  The U.S. then called an emergency UNSC meeting on January 5, 2018, to demand that the U.N. interfere in Iran’s internal affairs.

America’s history clearly demonstrates that it has no regard for international law and treaties.  Its pledge is meaningless.  International law is a tool for America that does not apply to itself. This is a well-documented fact – and perhaps none has realized this better than the North Korean leader – Kim Jong-un.  But what is inexplicable is the failure of Iranians to address these violations.

Top Photo | U.S. Deputy Secretary of State Warren Christopher, (left), shakes the hand of Algerian Foreign Minister Mohamed Ben Yahia, after the signing of the formal agreement between the United States and Iran to Free the American hostages, at the Foreign Ministry in Algiers, on Jan. 19, 1981. (AP Photo)

Soraya Sepahpour-Ulrich is an independent researcher and writer with a focus on US foreign policy and the role of lobby groups in influencing US foreign policy. She is a peace activist, essayist and public speaker. Soraya has a bachelor’s degree in International Relations from the University of Southern California (USC), and has a master’s degree in Public Diplomacy – a joint program offered by USC Annenberg for Communication and USC School of International Relations. Her writings are published by various national and international websites.

[*] U.S. Treaties and Agreements | The Vienna Convention on the Law of Treaties defines a treaty “as an international agreement concluded between States in written form and governed by international law, whether embodied in a single instrument or in two or more related instruments and whatever its particular designation.”

[xii] Connie Bruck, “A reporter at large: Exiles; How Iran’s expatriates are gaming the nuclear threat”.  The New Yorker, March 6, 2006